Interview with Heiner Bielefeldt
"The Hard Core of Islamophobia Is Racist"

A ban on the burqa is possible, but a ban on the construction of minarets is unlawful, says the former director of the German Institute for Human Rights, Heiner Bielefeldt. He also considers the "hard core of Islamophobia" to be racist. Christian Rath sends us this interview 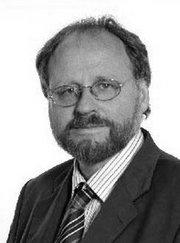 Heiner Bielefeldt: "One must be allowed to discuss religious questions in a robust, even satirical manner. However, the limit is reached when it stops being a discussion and is simply a matter of defamation and marginalization."

​​ Mr. Bielefeldt, the construction of minarets has been banned in Switzerland; France is considering introducing a ban on burqas; and in Germany, women teachers in many federal states are no longer allowed to wear headscarves. Do such prohibitions not curtail the religious freedom of Muslims? Or is it more a case of imposing human rights on a repressive religion?

Heiner Bielefeldt: We must make a differentiation here. The burqa really is misogynous and unacceptable. To prevent a woman from showing her face robs her of her individuality. This cannot be justified by freedom of religion. For this reason, I can understand the calls for a ban. That being said, I doubt it would do much good. What is to be gained by a situation where the women affected by such a ban would no longer be able to leave their homes?

Bielefeldt: The headscarf itself is not worthy of a ban. The issue in Germany is above all whether the neutrality of the state is infringed by a school teacher wearing an item of religious clothing in the classroom. The Constitutional Court has upheld the restriction of religious freedom in the civil service, while at the same time stipulating strict equal treatment for religions …

… which is obviously lacking in the Swiss ban on minarets.

"A targeted symbol of rejection and marginalisation": the church of Sacro Cuore in Bellinzona, Switzerland, erected a crib surrounded by two-metre high minarets

​​ Bielefeldt: Yes, there was not even a good reason to ban the construction of minarets in particular. It can only be considered a targeted symbol of rejection and marginalisation.

Why is criticism of Islam currently so prevalent?

Bielefeldt: The hard core of Islamophobia is racist. Nowadays, the antipathy towards foreigners or people who look different is often styled as criticism of religion because it makes it more digestible for the centre right and left-wing liberals.

Many critics of Islam are not actually speaking out against foreigners, but point to the issue of human rights.

Bielefeldt: It angers me when a hate site like "Politically Incorrect" claims to stand up for the constitution and human rights. They portray themselves as the heroes of enlightenment by laying into minorities. Is that not ridiculous? But what makes criticism of Islam so extraordinarily popular is the fact that it refers so directly to liberal values such as gender equality and the acceptance of homosexuality.

Are not women and homosexuals justifiably afraid of Islam?

Bielefeldt: Why "afraid of Islam"? There is of course patriarchal and homophobic violence in areas of society that are dominated by Islam. There is no point glossing over that. But why is this backwardness interpreted primarily in the light of religion instead of explaining it in sociological terms?

Where are the limits of permissible religious criticism?

Bielefeldt: One must be allowed to discuss religious questions in a robust, even satirical manner. Freedom of speech also applies to wholesale, aggressive, and tasteless reproaches. However, the limit is reached when it stops being a discussion and is simply a matter of defamation and marginalization.

As illustrated by the discussion about the Mohammed caricatures, many Muslims react sensitively to religious criticism.

Bielefeldt: In legal terms, there can be no special protection for Muslims. This is an expression of their recognition as equal members of our society. However, it is a matter of style whether one takes into account that many Muslims belong to social strata characterised by low levels of education and are not as well able to deal with provocation.

The writer Ralph Giordano warns that when debating and dealing with non-believers, the Muslims have a religiously sanctioned licence to deceive.

Bielefeldt: Accusing the other side of inherent dishonesty is a dangerous form of marginalization. Those who submerge themselves in this logic, will not be able to find their way out again. One should instead always assume that the person to whom one is talking is credible until the opposite is proven to be the case.

Is it permissible to demand that representatives of Islam in Germany declare their defence of the values enshrined in the constitution?

"In terms of this academic theological task, Christianity with its university faculties is undoubtedly ahead of European Islam": Mosque Open Day in the German city of Gelsenkirchen

​​ Bielefeldt: Germany's Basic Law is the foundation of co-existence in Germany. Even a religion such as Islam must adopt a positive stance towards this fact. However, one should only specifically require representatives of associations to declare their defence of such values, not individual Muslims.

Bielefeldt: Because the constitution is a matter of course for those Muslims who have grown up in this country. I can understand why they react with helplessness, surprise, and anger when people demand – and often in an inquisitorial tone too – that they make special declarations. After all, no-one asks people with a Christian upbringing whether certain parts of the Bible are compatible with the constitution.

That may be, but the Koran actually says that "Men are in charge of women".

Bielefeldt: Gender equality is a steadfast principle stipulated by Germany's Basic Law and one to which religious communities must also adhere, for example, if they want to give religious instruction at state-run schools. Apart from that, it is a matter of theological interpretation to reconcile verses of the Koran with the principles of the Basic Law.

The same can be said of certain parts of the Bible, which states that "Woman reflects the glory of man". What is decisive is that at the end of the day, the principles of the Basic Law are accepted. In terms of this academic theological task, Christianity with its university faculties is undoubtedly ahead of European Islam.

Does Islam not have difficulty in this regard because the Koran is considered to have been dictated directly by Allah?

Bielefeldt: This certainly doesn't make the task easier. However, to date, Islamic theology has given itself room to manoeuvre by emphasising that certain statements in the Koran should be seen in the light of the situation in which they were made, namely during a Medieval civil war, when permitting men to take several wives was seen as a way of caring for widows and orphans.

Bielefeldt: Some people in the Christian Churches certainly believe this to be the case. However, they overlook the fact that in Christianity too, and in particular in the Catholic Church, the process that led to the full recognition of human rights and religious freedom was long and full of conflict. Therefore, the Christian Churches have a head start on Islam in terms of the way they interact with the secular state. It would be wrong to say that Christians have already completed the process of enlightenment and that Islam has yet to start it. It would be more correct to say that for both religions, the process is still ongoing.

The Catholic theologian and philosopher Heiner Bielefeldt is the former director of the state-funded German Institute for Human Rights in Berlin. In September 2009, he assumed the very first German chair for Human Rights and Human Rights Policy at the University of Erlangen-Nuremberg. On this subject he has already published, among other things, a book entitled Muslime im säkularen Rechtsstaat – Integrationschancen durch Religionsfreiheit (Muslims in the Secular State Governed by the Rule of Law: Opportunities for Integration through Religious Freedom).

Debate on the Swiss Minaret Ban
The Hypocrisy of Islam's Indignation
In view of the precarious situation of religious minorities in Islamic countries, the uproar in the Islamic world over the Swiss referendum banning the construction of minarets is exaggerated and hypocritical, says author and media researcher Khaled Hroub

END_OF_DOCUMENT_TOKEN_TO_BE_REPLACED
Social media
and networks
Subscribe to our
newsletter