Hiam Abbas was one of the Palestinian actresses who played in Steven Spielberg's film "Munich." In this interview she talks about how Palestinians and Jews worked together behind the scenes 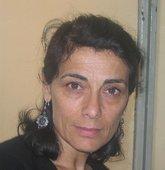 Hiam Abbas: "I still remember how difficult it was for the Arab actors to manhandle the Israeli actors in the first scene where the Israeli national team is taken hostage"

​​Why did Steven Spielberg want to meet with you? Had he seen your films?

Hijam Abbas: First of all, Steven Spielberg liked my role in "The Syrian Bride." Then the producer Kathleen Kennedy called me and said that it was possible that Steven Spielberg might want a few dialogues in Arabic or Hebrew in his film. In that case, she said, he wants you as an actress; after all you teach Arabic and Hebrew.

The actors, both Arab and Jewish, agreed that nobody would point fingers and accuse the other. This made it possible to have a very neutral and human standpoint, to avoid siding with Jews or Palestinians. Spielberg is a world-renowned director, everyone wants to work with him. I had read the screenplay and knew that nothing would keep me from participating in this project.

Weren't you shocked by the assassinations of the Palestinian guerillas and other Palestinians by Mossad?

Abbas: When I read the screenplay I quickly realized that this film was not one of those typical American films where Arabs are portrayed with contempt, as a people still living in past centuries, who eat with their hands and wear turbans.

The Palestinian in "Munich" is a normal person who eats, drinks, gets dressed, and like the other characters in the film has feelings, and who is very concerned about defending his rights. What I want to say here is that I sensed no arrogant racism in the screenplay.

I asked myself if I as a Palestinian actress could accept a role in this project or not. The answer was yes. The film needed an artistic, nonpolitical Palestinian presence. I had a good relationship with the screenplay writer and with the director. We had many long discussions.

Did your conversations with Spielberg go beyond the merely artistic aspects?. Did you talk about political aspects of the film?

Abbas: We talked about many artistic and political aspects, in fact, we talked about everything. We even talked about the cinematography. Where we didn't agree on the political story, we met again on the human level. About the persons being depicted in the film. That one cannot be for the Israelis and refuse to acknowledge the humanity of the Palestinians.

We discussed this during every stage of the film, and consequently all the Palestinians are portrayed as very human. Even in the scene where the Palestinian Ali is arguing with the Israeli secret agent Avner, he appears to me as someone who was defending his country and his people. In my opinion, this scene is one of the most important film scenes in Western cinema, one in which the rights of the Palestinians are defended.

Were there any tensions between the actors or with the director because of different political beliefs?

Abbas: The Arab and Israeli actors had no problems with another. We all lived together in a hotel for three months. Of course we had many discussions, but they helped both sides grow closer. I still remember how difficult it was for the Arab actors to manhandle the Israeli actors in the first scene where the Israeli national team is taken hostage.

Steven Spielberg has Jewish ancestors and is making a film about Palestinians and Israelis. How is it for you when Jewish artists work with Palestinian topics?

Abbas: I would like to stress something very important. If Jews and Arabs do not start speaking up for the interests of the other side, we will never make any progress. I have no problem with projects by artists of Jewish descent. If I have a problem, then perhaps sometimes with the content. But even if I have a different political viewpoint, I can still agree on the content.

I personally do not judge people based on their religion or nationality. The conflict is not an ethnic one. With the Arab-Israeli conflict the other side is interested in asserting a specific point of view and a political program against us. As a human I do not treat other human beings differently just because their religion is different than mine. I won't let politicians dictate what I should believe and how I should behave. I am an artist and regard art as an opportunity to mediate between people.

Art offers a great opportunity to approach others. I relate what I am thinking. What I think about, I relate through films. I am fortunate to have participated in films in which I could express the humanity that I find in myself.

Steven Spielberg's "Munich" tells of the assassinations of the Palestinians who were allegedly the masterminds behind the massacre of the Israeli national team in Munich's Olympic stadium. Mossad commissioned five of its members to carry out the executions.

The Palestinian actress and artist Hiam Abbas was born in Nazareth and worked at the Hakawati Theater. In the 1980s she went to London, and from there to Paris, where she now lives and works. She has participated in several feature films, including Raja Amari's "Satin Rouge," Rashid Mashahrawi's "Haifa," Eran Riklis's "The Syrian Bride," Amos Gitai's "Free Zone" (al-mantiqa al-hurra), and Hany Abu-Assad's "Paradise Now." She herself has made two short films: "Bread" and "The Eternal Dance."

Interview Eran Riklis
The Making of "The Syrian Bride"
Eran Riklis' latest film, "The Syrian Bride", deals with a young Druze woman from the Golan Heights who marries a man from Syria. After the wedding, she is not allowed to visit her family in Israel anymore. Interview by Igal Avidan

Interview Hany Abu-Assad
Shooting "Paradise Now" amid Israeli Rockets
The film "Paradise Now" by Hany Abu-Assad, which was shown in competition at this year's Berlin Film Festival, is the first feature film to take on the theme of suicide bombers. Igal Avidan interviewed the Palestinian filmmaker

Interview Hany Abu-Assad
New Creative Impetus for the Palestinian Film
Palestinian cinema was showcased at the last film festival in Cannes with two productions at once. One of these was "Rana's Wedding" – an extremely poetic film. Amin Farzanefar interviewed the film's director Hany Abu-Assad

END_OF_DOCUMENT_TOKEN_TO_BE_REPLACED
Social media
and networks
Subscribe to our
newsletter