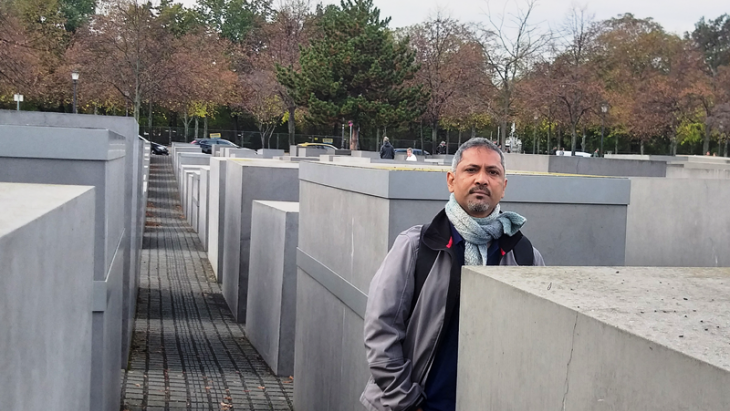 Award-winning Indian author Rahman Abbas spent time in Europe last year researching "the Holocaust and the future of minorities in India and Pakistan". To mark VE Day on 8 May, he discusses India's alarming shift towards Hindutva nationalism with Dominik Muller

You are a member of India's secular Muslim minority. With phrases like "corona jihad" circulating freely, how threatening do you find the current situation?

It is extremely dangerous because it plays into the hands of the racist right-wing forces. Hindutva nationalism is vilifying the minority as the cause of all ills. The international community has witnessed how Hindutva nationalism used terms like "love jihad" to spread hatred against the Muslim minority in India. This politically motivated hate resulted in mob lynchings taking place on the streets in broad daylight. It was normalised by systematic negative campaigning. The "corona jihad" can be seen as an extension of the same campaign, carried out by social and mainstream media and politicians belonging to the governing Bharatiya Janata party. The consequences are visible throughout Indian society: Hindus are refusing to buy vegetables and groceries from Muslim vendors, doctors are refusing to treat Muslim patients, and so on.

What has been the aim of your research in Europe?

The research grant was provided for my next novel. I have visited numerous places in Europe with a view to understanding the growth of Nazism, how it affected German society and how Nazi ideology resulted in the mass killings and genocide of Jews, Communists, political opponents, Sinti, Roma, the handicapped and others. In India, Muslim, Dalits, Christian and tribal people already experience discrimination, exclusion and oppression at the hands of right-wing extremists or Hindu Supremacist forces, while in Pakistan it is the Hindu and Shia minorities who are threatened by Islamists. I wanted to study and identify the socio-political milieu, the ideologies, and the failure to denounce what was happening as the background to the Holocaust in Germany and Europe. I wanted to discover the key lessons from Germany's Nazi past, in order to make people of the Indian subcontinent aware of the tendencies and traits of fascism.

My analysis of the last two decades in which fundamentalism has increased on the subcontinent, as well as my investigation of various religious-political organisations in both India and Pakistan, provides sufficient evidence to point to the danger of possible genocide. The current period is very similar to the first phase of Nazi ascent in Germany.

How similar are current political developments in India to the situation in Germany under the Nazis at the beginning of the last century?

Nazism was a racist and supremacist ideology. Its adherents used nationalism and the demonisation of their political opponents as puppets to secure their own rise to power. The National Socialists spread the idea that the Aryan race was supreme, that it should rule over all others. The Nazis exploited all means at their disposal to malign the Jews and many others, but Jews in particular were tagged as traitors to German interests. In 1935 the Nuremberg Laws revoked the citizenship and fundamental rights of Jews, Adolf Hitler having already declared a national boycott of Jewish businesses in 1933.

Iranian artist Parastou Forouhar has lived in Germany since 1991. Full of rage, just like the protesters, she hasn't yet given up on the idea of justice. By Julia Hitz END_OF_DOCUMENT_TOKEN_TO_BE_REPLACED

Unflattering terms were used at a German Football Association human rights congress aimed at "intensifying the discussion" ahead of the World Cup. One speaker in particular made ... END_OF_DOCUMENT_TOKEN_TO_BE_REPLACED

Fariduddin Attar’s "The Conference of the Birds", one of the seminal works of Islamic mysticism, has recently been published in sumptuously illustrated German translation. It ... END_OF_DOCUMENT_TOKEN_TO_BE_REPLACED

Egyptian authorities have Mada Masr in their sights once again after critical reporting. But the editor of the country's last independent news source is adamant they will continue ... END_OF_DOCUMENT_TOKEN_TO_BE_REPLACED

Like Christianity, Europe's history is one of migration. Both have strong roots in the Orient and in cultures thousands of years old. Cultural historian Bernhard Braun invites us ... END_OF_DOCUMENT_TOKEN_TO_BE_REPLACED
Author:
Dominik Müller
Date:
Mail:
Send via mail

END_OF_DOCUMENT_TOKEN_TO_BE_REPLACED
Social media
and networks
Subscribe to our
newsletter