During the last major pogrom in Gujarat in 2002, Narendra Modi, Indiaʹs incumbent prime minister, was prime minister of the state. More than 1000 people were killed, predominantly Muslims. To this day, many human rights activists, lawyers and journalists accuse Modi of having allowed and subsequently justified the bloodbath. How can it be that major Indian and international corporations like Ambanis, Tatas, Mittals, Adanis and even Goldman Sachs endorsed his campaign to become the future prime minister of India?

Roy: These new economic policies needed a strong man, they needed ruthlessness in displacing people, in taking over lands, in changing the labour laws and so on. When he campaigned for the post of prime minister in 2014 he shed his saffron (symbol of the Hindutva faction) and donned a business suit. And sadly even many liberal intellectuals celebrated his arrival as prime minister in a way I thought was shameful. They tried to erase the Gujarat massacre, to pretend that Hindutva – the Hindu right-wing agenda – was a thing of the past.

The BJP is the political wing of a much larger structure. What is its ideological background?

Roy: The BJP is not the power in India, it is this organisation called the RSS, the Rashtriya Swayamsevak Sangh, which was set up in 1925 along the lines of Mussolini's black shirts. They openly talk about declaring India a Hindu nation and have always said that the constitution must be changed. Modi is a member, almost all BJP ministers and deputies are members. The RSS holds the real power. Every institution, be it the army, universities, courts or intelligence services, has been penetrated by the RSS.

Islamophobia is a core element of the Hindutva ideology. Apart from the violence against the minority community, how does this affect the 150 million Muslims in India? Do their organisations raise their voice against discrimination and government politics publicly? 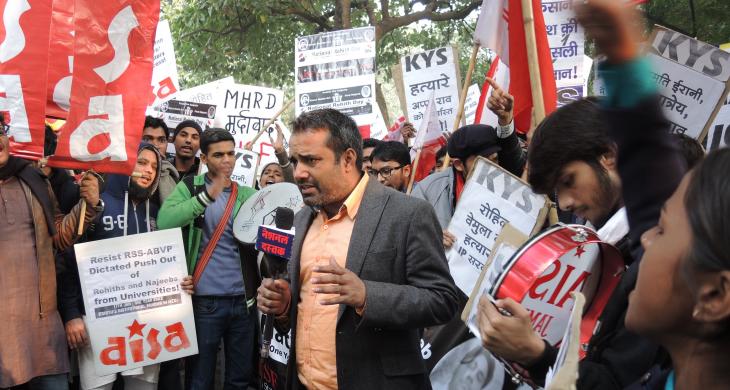 The oppressed minorities: university students in Delhi were still able to exercise their democratic right to freedom of speech, as the Indian government tried to quash dissent within the countryʹs higher education system. But what about Indiaʹs Muslims? "As soon as they voice criticism in public, they isolate themselves still more. The space in which they move is narrow and filled with fear. Honestly, it is like pre-Nazi Germany," says Roy

Roy: They're well organised. But they are afraid. As soon as they voice criticism in public, they isolate themselves still more. Because people then say, oh, look at them, they are organised, they are dangerous. The space in which they move is narrow and filled with fear. Honestly, it is like pre-Nazi Germany. It would have been inconceivable for the Jews to march on the streets. They would not have done themselves any favours. This narrowness is also reflected in the current election campaign: the Congress Party does not talk about Muslims. Because it knows that it would immediately be called a "Muslim" party. So now the Congress Party must also show how "Hindu" it is.

How would you describe the role of the international community?

Roy: The USA refused a visa to Modi after the Gujarat pogrom. But since he became prime minister, he has been there many times and has embraced all the presidents. The West is opportunist. India is a huge market and must therefore be presented as a wonderful investment opportunity. Hence the whitewashing of Modi. Morality is like a recipe book. It depends on the ingredients that are available and the vagaries of the stock market.

The last time we met was in 2009, shortly before the then general elections. Do you have any expectations about the outcome of the current Lok Sabha?

Roy: India is a different place today, it is much more dangerous than it was ten years ago. Because the amount of hatred that has built up here, the amount of lies, fake messages, changing curricula. You canʹt just make it all disappear. It's there and it is waiting to explode. Regardless of what happens in the elections.

The ''German Khars'' are a family of craftsmen known in Srinagar for their skills repairing old German-made medical equipment. Their craft has been preserved for decades, but ... END_OF_DOCUMENT_TOKEN_TO_BE_REPLACED

Marrying for love is still quite a rare thing in India. Religion often gets in the way, as do caste and parental opinions. After the defamatory term "Love Jihad" started trending ... END_OF_DOCUMENT_TOKEN_TO_BE_REPLACED

With the construction of a controversial Hindu temple in the city of Ayodhya, Indian Prime Minister Narendra Modi is marginalising the Muslim community. With his rhetoric, he is ... END_OF_DOCUMENT_TOKEN_TO_BE_REPLACED

In India, ultra-nationalist musicians are providing a soundtrack for Hindu extremists with songs that glorify violence. The goal is to make the secular and pluralistic country a ... END_OF_DOCUMENT_TOKEN_TO_BE_REPLACED

Dozens of academics, writers and civic activists have been arrested in India on charges of sedition, terrorism and inciting violence. Sruti Bala asks why a country that sees ... END_OF_DOCUMENT_TOKEN_TO_BE_REPLACED

You might expect the advent of a long, bleak winter to bring everything to a standstill in Kashmir, but thanks to ingenious portable earthenware heating pots – kangdi – encased in ... END_OF_DOCUMENT_TOKEN_TO_BE_REPLACED

END_OF_DOCUMENT_TOKEN_TO_BE_REPLACED
Social media
and networks
Subscribe to our
newsletter