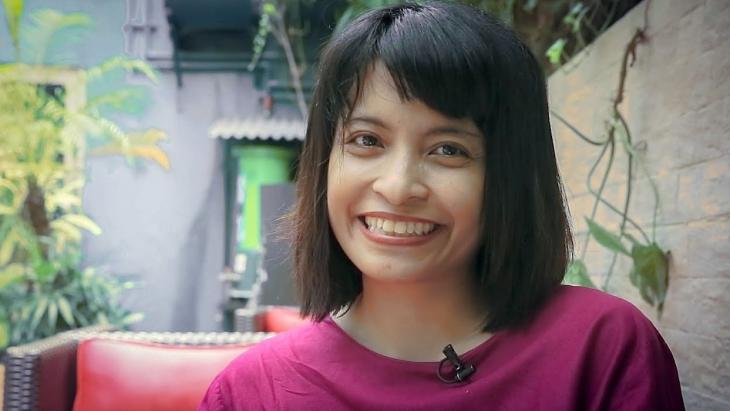 Described by some as a Muslim feminist, Feby Indirani’s writing is daring and light-hearted at once. Her collection of short stories – "Bukan Perawan Maria" – recently translated into Italian, parodies the inconsistencies of radical Islam and orthodoxy, while seeking to emphasise the humanity we all share. Interview by Naima Morelli

What are your earliest memories of writing?

Feby Indirani: I remember I started writing a diary and some poetry when I was in elementary school. But my love for writing really grew in my teenage years. When I was 17, I won an essay writing competition held by the teenager magazine Gadis. The topic of the competition was "express yourself". So I wrote something last-minute and sent it two days before the deadline. From more than 700 participants I won the 2nd prize. It was a rewarding experience for me as a 17-year old girl!

I presume this gave you the confidence to continue?

Indirani: Yes, but more importantly, I received two letters from girls of my age living in Aceh. These girls read my article and they wrote about how they felt connected to the story. I marvelled at how writing can touch readers in faraway places that I had never visited. This was far more valuable than any award!

How has journalism informed your fiction?

Indirani: I worked as a full-time journalist for about 10 years. I chose journalism because I thought it was the closest thing to writing. In the process, I learned a lot about uncovering the truth. It was humbling for me as well, because sometimes I was sure that I knew something, but then I would find out that I was wrong.

So you were writing fiction on the side?

Indirani: Yes, I worked two years as a media researcher and went on to investigate the Ahmadiyah group, producing a feature about it. Thanks to these more flexible working conditions I was able to get more deeply involved in what I was passionate about, managing my time to write my own stories. I began writing my first novel "Simfoni Bulan" (Bulan’s Symphony) in 2005. 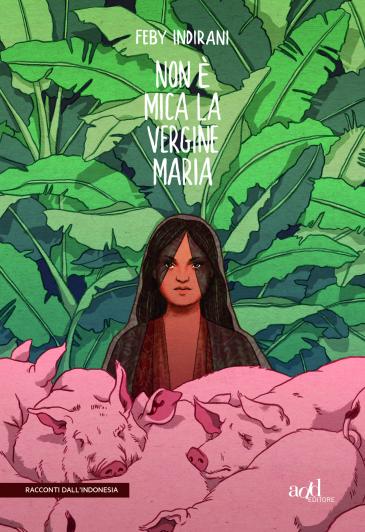 Recently translated into Italian, Feby's short stories read a bit like Zen tales in their lightness and humour, never failing to convey the underlying love at the core of all spiritual paths

"Simfoni Bulan" centres around a real-life episode, the closing of Kramat Tunggak, the biggest red-light district in Southeast Asia, which was replaced by a mosque. Did you conduct the field research yourself?

Indirani: I didn't get the chance to conduct the primary research by myself, because by the time I wrote it, the place had already closed down. So I gathered much of my information from books, news archives and other resources. "Simfoni Bulani" was the first time I ever openly criticised religion.

As a member of the Muslim community myself, I consider replacing a red-light district with a mosque a very selfish act. Not one of the so-called religious people was interested in knowing what happened to the people whose livelihood had depended on the district.

The publication of "Simfoni Bulan" and its treatment of a number of sensitive topics provoked a lot of controversy in Indonesia. How did you react to the backlash at the time?

Indirani: I don’t mind criticism in general, but what was hardest to accept at the time was the opposition from my parents and siblings. I come from a conservative family, and I could understand their point of view. Maybe they deemed the topic offensive, and the fact I was tackling it hurt and shocked them.

I’ve always been really close to my family, so it was really difficult for me. It took me about 10 years to dare to tackle religion issues in my writing again. But I believe, just as I have grown as a person, so has my family grown in their understanding.

You use a similar approach in your treatment of the characters portrayed in "Not Virgin Mary". You demonstrate a lot of empathy for figures with very strict, some would say, fundamentalist views. Instead of conveying some sort of moral judgement, is it your intention to expose the contradictions of certain rules and modes of behaviour?

Indirani: That’s exactly what I’m trying to do. If you ask my personal opinion on things such as niqab, or any other topic mentioned or related to stories in the book, I may agree or disagree. When I write fiction, I am not trying to be judgemental. The power of fiction lies in creating space for all the characters with all their various personality traits to present themselves fully. It doesn’t matter whether they are conservative, fundamentalist, gay, or polygamous. I believe each individual does something because, based on their values, they are convinced they are doing the right thing. The truth has many faces. Of course, this demands a lot of discipline, because I naturally have my own personal opinions.

You are a Muslim woman with a very open mind and inquiring personality. How has your relationship with Islam evolved over time?

Indirani: My relationship with Islam has been bittersweet since I was a kid. In a way, it is similar to the relationship I have with my mum. A mother-daughter relationship is always special. Of course you love each other, but at the same time, the process of growing together is not always easy. There are expectations, and if they are not met, a new process of acceptance has to happen. So, I think it makes for a very dynamic kind of relationship. Today I regard God as my partner in crime.

There is a Muslim saying which translates as: "God is closer to you than the vein in your neck". Can you imagine how close that is? So, if it’s true – and I believe it is – then how can you hide? I wore my hijab for a few years, because my mother didn’t want me to show my hair. But after a long process of looking for the truth, I just stopped covering up. I realised that I cannot hide from God anymore, anyhow, or anyway. God will love me no matter what. I don’t need to hide anything about myself ever again.

In your writing you draw a sharp distinction between a person's own understanding of faith and organised religion.

Indirani: Faith is a very personal thing. It’s very different to organised religion, which tends to expect people to be homogeneous. There are also a lot of conflicts of interests, with some groups exploiting religion for their political or economic interests. To my mind, everyone should have the right to define their own belief.

Water buffalo and oxen have been part of the work in Indonesian fields for centuries. But the draught animals are no strangers to sport either, as can be seen in two traditional ... END_OF_DOCUMENT_TOKEN_TO_BE_REPLACED

According to the latest Reuters tally, more than 2.54 million people are now reported to have been infected by the novel coronavirus globally and 177,004 have died. As Muslims ... END_OF_DOCUMENT_TOKEN_TO_BE_REPLACED

Around the Islamic world, lockdowns and curfews are being extended and religious ceremonies are being cancelled outright in the hope of slowing the spread of COVID-19. Here’s the ... END_OF_DOCUMENT_TOKEN_TO_BE_REPLACED

While some are beginning to protest the lockdown, others are unable to bury their loved ones in accordance with Islam. Here’s the latest from across the region END_OF_DOCUMENT_TOKEN_TO_BE_REPLACED

Coronavirus continues unabated. Iran remains a hub of infection, war-torn Syria has recorded its first case and Yemen is bracing itself for the worst. Here’s the latest from ... END_OF_DOCUMENT_TOKEN_TO_BE_REPLACED

As COVID-19 sweeps across the globe, it is forcing religions to adapt and take action to prevent infection. But experts warn against using the crisis to fuel conspiracy theories. ... END_OF_DOCUMENT_TOKEN_TO_BE_REPLACED
Author:
Naima Morelli
Date:
Mail:
Send via mail

END_OF_DOCUMENT_TOKEN_TO_BE_REPLACED
Social media
and networks
Subscribe to our
newsletter