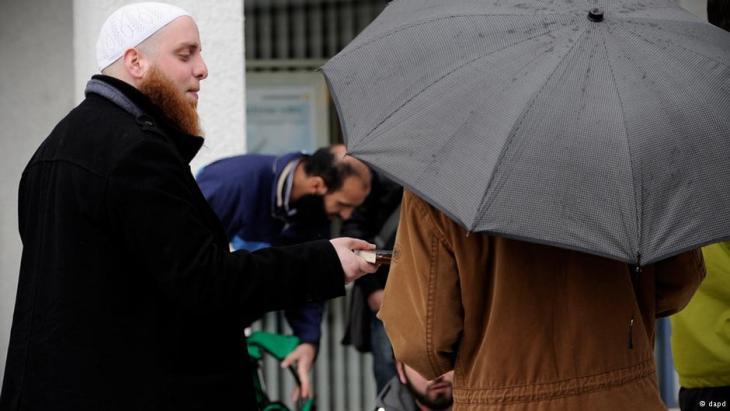 More than 300 people from Germany have gone to Syria to join the jihad. In this interview with Jannis Hagmann, Benno Köpfer of the German domestic intelligence service explains what radicalises young people, why not all Salafists agree with the ISIS caliphate and why he drinks the occasional tea with some of them

Mr Köpfer, Muslim extremists have declared a caliphate in Syria and Iraq. How have Salafists in Germany reacted to this development?

Benno Köpfer: Some Salafists are very critical of it and reject it, but there are also sympathisers from the militant jihadist scene. The plans that are being implemented in Iraq have been doing the rounds in jihadist circles for a good ten years. Those in Germany who portray themselves as militant and propagate jihad can now post on Facebook that they're not just all talk and that they really are founding an Islamic state.

The German domestic intelligence service is aware of 320 Salafists who have gone to Syria. The head of ISIS, Abu Bakr al-Baghdadi, has now called on Muslims all over the world to support his fighters. Are you anticipating that the number of jihad tourists will rise?

Köpfer: Broadly speaking, yes. A few more men and women will want to see it all at first hand. The fact that Caliph Ibrahim (Abu Bakr al-Baghdadi – ed.) is now personally addressing Muslims abroad makes the subject even more relevant for us. That being said, right from the word go, ISIS has been communicating in German and other European languages.

Glossy brochures show a war that is not only about crucifixions and beheadings, but also about things like consumer protection and vaccination campaigns. And in the Iraqi towns and cities where ISIS fighters are in control, they seem to be behaving relatively moderately. That lowers people's inhibitions to travel to these regions. 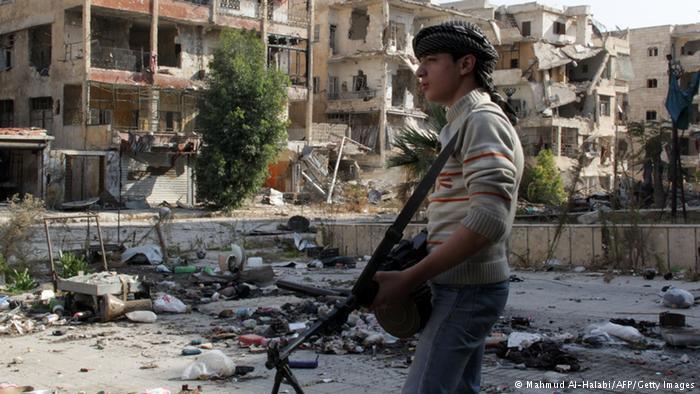 "The Islamic State consists partly of military men from the former Iraqi regime. They're far more professional than any young people from Europe. History is being written in Syria and Iraq, and they want to be part of it," says Benno Köpfer

For a European jihadist, is there a difference between carrying out a terrorist bombing and going to Syria?

Köpfer: Bombings, like the one in Madrid in 2004, are a different matter. Many young people's idealism at the moment is certainly understandable. They see civilian Muslim victims and a terrible regime in Syria and say, "I have to overthrow these people!" It is not known whether the 320 people who've officially gone over from Germany have all been involved in fighting. The Islamic State (formerly known as ISIS – ed.) consists partly of military men from the former Iraqi regime. They're far more professional than any young people from Europe. History is being written in Syria and Iraq, and they want to be part of it.

That being said, I find it hard to imagine that most of those who have travelled from Germany are anything but cannon fodder. The fighters are held in awe. If you look at Denis Cuspert (a former German rapper – ed.), there is a kind of fan cult. When he goes out in Raqqa, people try to take selfies with him.

The ideologists who were close to Bin Laden in the original al-Qaida directed militant jihadists' focus away from the "nearby enemy", their own regime, to the "distant enemy", the West. Are we seeing a reversal of that strategy?

Köpfer: In Syria at the moment, it's primarily about the nearby enemy. But the agenda of the Islamic State goes beyond Syria and Iraq. There are maps in circulation showing the caliphate reaching all the way to "Al-Andalus" on the Iberian Peninsula. They include the Balkans, Greece, Turkey and the Caucasus. So the distant enemy hasn't been entirely forgotten.

You would think that all Salafists would be delighted by such a prospect. But you mentioned critical voices to begin with.

Köpfer: Salafists aren't a monolithic entity. Many scholars in Saudi Arabia aren't shouting "Hurrah, the caliph is back!" And their students have an influence in Europe too. They're referred to as quietists or purists, because they are not politically active.

So-called mainstream Salafists, on the other hand, regard political activities as legitimate. There's a bridge to more militant forms here, a link between revolutionary and Salafi ideas. And then there are the actual terrorist jihadists who are prepared to use violence.

But even the so-called "Takfiris" will reject the Islamic State in its current form because it has no religious legitimation. Who is this al-Baghdadi? What makes him a caliph? There are a lot of questions from an Islamic theological standpoint. The punishments too – beheadings and so on – and the anti-Shia attacks are rejected in some Salafist circles. 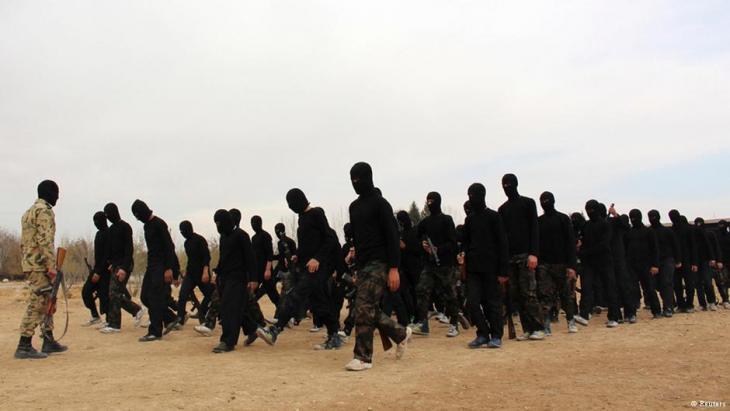 According to Köpfer, the so-called "Takfiris" will also reject the Islamic State in its current form because it has no religious legitimation

The service you work for estimates that there are 5,500 Salafists in Germany, but that only a fraction of them are prepared to use violence. At what point does Salafism become illegal?

Köpfer: Salafism is never actually illegal. In Germany you're allowed to be a Salafist unless you violate the constitution. That was the case with the "Millatu Ibrahim" and "DawaFFM" associations, which were banned. Militant activism will be persecuted, but standing in a marketplace and handing out promotional material isn't illegal. That was what courts decided when there was an attempt to ban events involving Pierre Vogel (a Salafist preacher – ed.). We have to adopt a more relaxed approach in such matters.

And it's not illegal to travel to Syria either, is it?

Köpfer: We have to take a careful look. What was the person doing there? Was he perhaps only in a refugee camp to do Islamic charity work? Or did he take part in training, can he produce explosives and has lost his inhibitions against killing? There are several criminal offences under German law that may apply in such cases. But not everyone returning from Syria is a threat.

After the ban on Millatu Ibrahim, Denis Cuspert called on Muslims to emigrate. Does state repression encourage emigration?

Köpfer: A defensive democracy has to hand out red cards; there's no way to work entirely without repression. We know from research that young, first-time offenders start thinking again when they see the consequences of their actions. On the other hand, however, there has to be an accepting, respectful interaction. We weigh up the ratio of repression and prevention every day anew. This dual role is sometimes too much for the state and the security authorities.

There was much talk of sleepers after 9/11. Will those returning from Syria provoke a similar panic?

Köpfer: The image of the sleeper never quite fitted. We avoided using the term from the very beginning. As I said, many elements in the process of radicalisation are absolutely legal. But the Syria returnees aren't just seen as a threat, they really are dangerous. If someone has gained the appropriate training and lost the inhibition to kill, then he or she constitutes a threat. 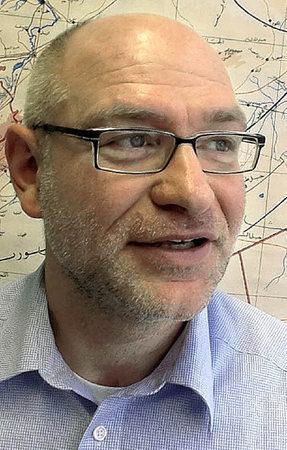 Why hasn't anything happened yet in Germany?

Köpfer: To some extent, we've just been lucky. The failed bombing of Bonn's main station in 2012 was a very close call. But on top of that, we don't have the kind of problems the French have in their banlieues, where there are really tough problem areas with all the youth crime and unemployment that entails. When you talk to people from the scene here, you realise many of them like living in Germany. That means they have more inhibitions.

Do you talk to people directly or do you have informers? How do you conduct your research?

Köpfer: Intelligence methods such as the use of informers are the smallest part of our work. Direct conversations are much more important. Even as a member of the domestic intelligence services, I can go up to people and say, "Hello, my name's Benno Köpfer, and I'd like to know ..."

We drink the occasional tea together. They don't tell me everything, of course, but they do want to show that it's not necessary to monitor them. Sometimes they point me in the direction of other people. They realise that I've been to Yemen and Syria and that they can really talk to me. It's not as tense and awkward as one might imagine.

Fariduddin Attar’s "The Conference of the Birds", one of the seminal works of Islamic mysticism, has recently been published in sumptuously illustrated German translation. It ... END_OF_DOCUMENT_TOKEN_TO_BE_REPLACED

Egyptian authorities have Mada Masr in their sights once again after critical reporting. But the editor of the country's last independent news source is adamant they will continue ... END_OF_DOCUMENT_TOKEN_TO_BE_REPLACED

Like Christianity, Europe's history is one of migration. Both have strong roots in the Orient and in cultures thousands of years old. Cultural historian Bernhard Braun invites us ... END_OF_DOCUMENT_TOKEN_TO_BE_REPLACED

Mohamed Abla is the first visual artist from Egypt to be awarded the Goethe-Institut’s Goethe Medal, Germany’s highest honour in the area of foreign cultural policy. Stefan ... END_OF_DOCUMENT_TOKEN_TO_BE_REPLACED

Bachtyar Ali sends the hero of his latest novel – "Mein Onkel den der Wind mitnahm" – literally flying. Jamshid is so thin after his years as a political prisoner that a gust of ... END_OF_DOCUMENT_TOKEN_TO_BE_REPLACED
Author:
Jannis Hagmann
Date:
Mail:
Send via mail

END_OF_DOCUMENT_TOKEN_TO_BE_REPLACED
Social media
and networks
Subscribe to our
newsletter