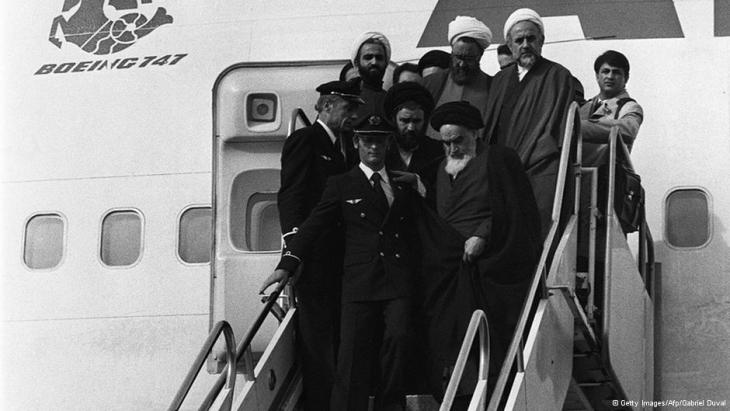 Thirty-five years ago, Ayatollah Khomeini returned to Iran from exile. Thomas Latschan spoke to the Iran expert Bahman Nirumand about Khomeini's role in the Islamic Revolution and his significance for modern-day Iran

Bahman Nirumand, it is now 35 years since revolutionary forces overthrew the Shah of Persia. You yourself had recently returned to Iran from Germany and experienced events first hand. How would you describe the revolutionary movement and the mood of the Iranian people at the beginning of the revolution?

Bahman Nirumand: The mood was incredibly euphoric. Everyone was filled with hope for a better life. The Islamic Revolution was essentially an anti-dictatorial revolution, and its motto was originally "Freedom and independence!" The call for an "Islamic Republic" only came along as a third demand in the final months. Everyone was so euphoric. I have never – not even in films – seen such scenes as those in Iran in the few weeks before and after the overthrow of the shah.

The resentment towards the shah and the ruling elite had built up over many years. What was the spark that set the powder keg alight in 1978/1979?

Nirumand: There are many theories about that. My theory is that it wasn't the poverty that was prevalent in large parts of the country; it was two other things that came together: firstly, Iran had become a financially important country as a result of its oil revenues. As a result, a large middle class had emerged, and that middle class was demanding a political say. That, in my opinion, was the actual engine of the revolution. 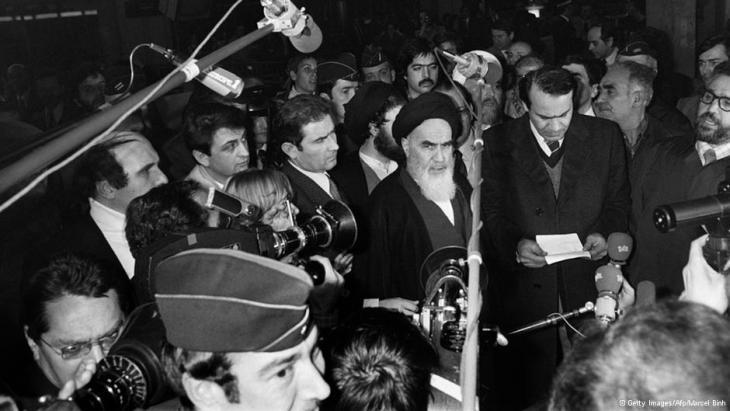 Symbolic figure of the Islamic Revolution: during his time in exile in Paris, Ayatollah Khomeini became a focus of global media attention, a situation that gave him the ideal platform from which to address his supporters in Iran

What role did Ayatollah Khomeini play in exile for the protest movement in Iran? And why was he in particular such a key figure?

Nirumand: There were a lot of coincidences involved in the Islamists being able to place themselves at the forefront of the movement. It seems to me that one important thing was that Khomeini was expelled from his Iraqi exile in Najaf – under pressure from the shah. He then relocated to Paris, where he suddenly found himself in the spotlight of the entire media and worldwide interest. From this position, he could address his messages to Iran's Muslims.

The second most important reason was that the Islamic community was well organised. Khomeini managed to make more than 100,000 clergymen in Iran into party cadre, the mosques into party headquarters and the faithful into his foot soldiers. That was how Khomeini became the undisputed leader of the revolution within a matter of months, and everyone believed his promises that Iran would soon be a paradise on earth.

When the shah was overthrown, were there any indications that the revolution would take the turn it did? After all, a liberal politician, Mehdi Bazargan, was made interim head of government.

Nirumand: That was a very clever move by Khomeini. Bazargan did have religious tendencies but these tendencies were liberal. He was part of the enlightened movement in Iran. Nevertheless, the direction in which the train was heading became clear even in the first few weeks. Even the first question put to the people in a referendum – "Islamic Republic: yes or no?" – was an attempt to push it through, legally but also in a very deceitful manner (a referendum on the new Islamic constitution for Iran was held only two months after Khomeini's return, on 30/31 March 1979 – ed.).

Voting "No" would mean you were in favour of retaining the regime that had been overthrown, i.e. the monarchy, and 90 per cent of Iranians were against that. But what did a "Yes" vote mean? No one knew what an "Islamic Republic" was supposed to be. Even those who proposed it – Khomeini and his followers – hadn't given any explanations as to what they meant by the term. People thought: "Yes, a republic is a good thing, that's what we want. And Islam? All right, we're a Muslim country." No one said back then that the goal was a total islamisation of the country. 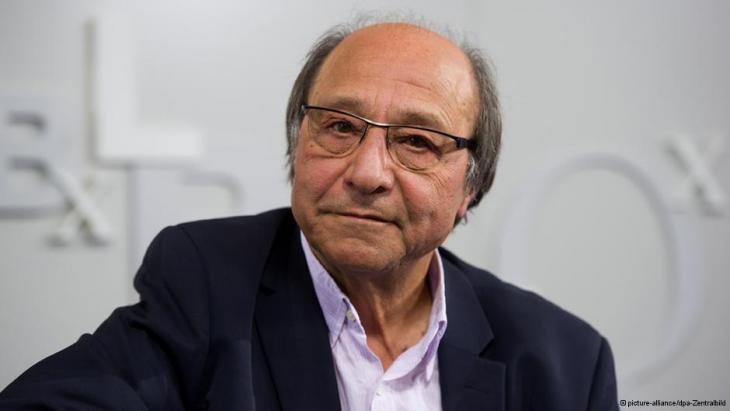 Bahman Nirumand is an Iranian-born writer, political analyst and the author of several books, including a political biography of Ayatollah Khomeini. He lives in Berlin but was in Tehran at the time of the Islamic Revolution

When did you realise that the revolution was tipping towards an Islamic state?

Nirumand: When the first attack was made on the press, against the newspaper "Ayandegan". It was a highly respected newspaper at the time; most of its journalists were liberal, left-wing and progressive. It was the most widely read newspaper in the country. It had begun to make democratic demands in an attempt to prevent Iran from developing into a completely Islamic country. Khomeini didn't yet dare to ban the newspaper; he merely said that he no longer read it. In response, the newspaper was published the next day with absolutely blank pages. It was its biggest ever print run. But the editorial offices were still raided all the same (it was closed down three months later – ed.).

Then there were attacks on bookshops and publishers. The intellectuals, the cultural institutions that were looking for a free society and not a constricted one like an Islamic state, were now being targeted.

After that, Khomeini rigorously exerted his claim to power. Why did the other opposition groups have so little to set against him?

Nirumand: The direction in which things were moving was now becoming increasingly apparent. Within the first year, developments had split the nation in two. At that stage, it was still not clear which side would gain the upper hand: the Left, the liberals and the democrats were also very strong.

The decision came with the Iran–Iraq War (1980–1988), when, encouraged by the West, Saddam Hussein attacked Iran. As Khomeini said, that was "a gift from heaven", because it meant that all opposition could be liquidated with reference to the external enemy, because hundreds of thousands could be sent to the front line, and because that largely wiped out unemployment, which was already a major problem at the time. Above all, however, the Islamists were able to impose the ideology of martyrdom, of dying for the fatherland. The war decided the direction in which Iran was going to develop. 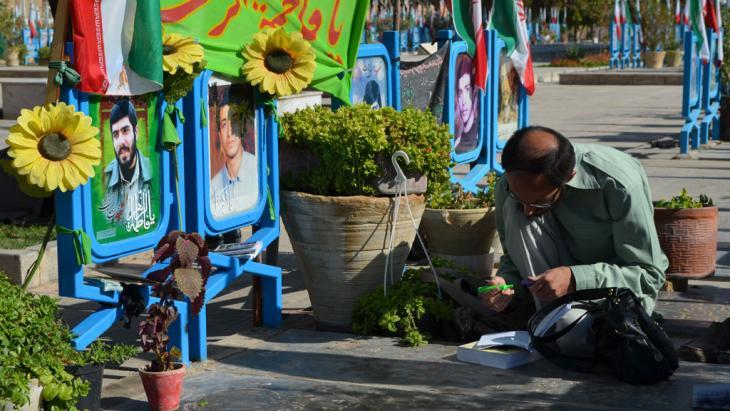 Do you think that the revolution changed Khomeini, that he adjusted his aims bit by bit? Or do you think he had his mind set on an Islamic Republic in its current form from the outset?

Nirumand: I think to begin with, Khomeini himself didn't believe that he would come to power. You can tell by his speeches in Paris. When he held his first speech in Iran, it already sounded very different. Firstly, he envisaged an Islamic community spanning the entire Islamic world. Secondly, he wanted to islamify all culture and life in Iran.

In actual fact, the Islamic Revolution was also a cultural revolution. The shah had attempted to westernise Iran. But that didn't mean freedom and democracy, only mass consumption and superficiality. The fact that Iran gave up its own culture for that didn't just anger the Islamists – everyone was against it.

That's why Khomeini found a breeding ground that was ripe for cultural change. People were ready for it. Khomeini's cultural struggle initially targeted the country's westernisation, but it then continued between the secular forces and the Islamists. That struggle continues to this day.

How strong is Khomeini's continuing effect on Iranian society today?

Nirumand: He still plays a very major role. He was, after all, the leader of a revolution that was to a great extent supported by the masses. In the beginning, 90 per cent of Iranians were behind Khomeini – including the Left – because they saw that there was no way to overthrow the shah without the Islamists. The overthrow of the monarchy is still chalked up as Khomeini's doing. That means he's still a respected figure. But even in the Islamic camp, there is more open debate about his ideas now. Not as direct criticism – no one would dare to do that – but many who express their opinions today are very distinct from Khomeini, even in the Islamic camp, for instance across the entire reform movement.

Journalist Michel Abdollahi was born in Tehran in 1981 and moved to Hamburg in 1986. His big breakthrough came with his television documentaries on social issues such as ... END_OF_DOCUMENT_TOKEN_TO_BE_REPLACED

Iran’s contemporary poets are less well known in Germany than the old Persian classics. Kurt Scharf has now translated 32 of them into German. Marian Brehmer dipped into the ... END_OF_DOCUMENT_TOKEN_TO_BE_REPLACED

A heated debate is raging in the Islamic world about whether the religious and political spheres in Islam are one and the same. Before this matter can be settled, the terms " ... END_OF_DOCUMENT_TOKEN_TO_BE_REPLACED

Just one day after the UN Secretariat omitted Saudi-led forces from a "list of shame", an airstrike killed four children. The UN is under pressure to acknowledge Saudi Arabia's ... END_OF_DOCUMENT_TOKEN_TO_BE_REPLACED

Over the centuries Hafez' legacy has exerted a unique influence on numerous poets in Europe, with many an Orientalist falling under his spell. In interview with Yasmin Khalifa, ... END_OF_DOCUMENT_TOKEN_TO_BE_REPLACED

War, poverty, cholera – and now coronavirus has taken hold in Yemen. The country could collapse, aid organisations fear. A Yemeni journalist talks about the situation in her ... END_OF_DOCUMENT_TOKEN_TO_BE_REPLACED
Author:
Thomas Latschan
Date:
Mail:
Send via mail

END_OF_DOCUMENT_TOKEN_TO_BE_REPLACED
Social media
and networks
Subscribe to our
newsletter