The renowned Iranian-American poet Kaveh Akbar writes in his poems about origin, religion – especially Islam, spirituality, the American dream and much more. Interview by Schayan Riaz

Your poem "The Palace" was recently published in The New Yorker magazine. In it you deal with the widespread war hysteria and the current conflict between the USA and Iran. How do you approach such a topic lyrically?

But as someone born in Iran, you would also be affected by it.

Akbar: Of course. I would be grief-stricken and furious and full of rage. But I think one of the things the poem grapples with is the idea that my outrage looks very comfortable from the vantage point of someone else’s fear. If someone is terrified, it seems pretty easy to just be outraged about it. So with my privilege it is incumbent upon me to leverage whatever capital I have into action, into consciousness, into direct financial support, in order to bridge the gulf between outrage and fear. 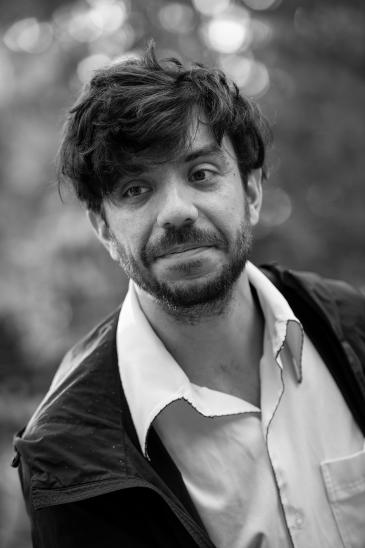 Kaveh Akbar was born in 1989 in Tehran and now lives in the USA. His poems have appeared in well-known media outlets such as The New Yorker, The New York Times, Poetry Magazine, The New Republic, Paris Review and many more. His most recent poem "The Palace" also featured prominently in the New Yorker

Would you say people are not doing enough? Are there more effective ways of protesting, for example, than merely attending a march?

Akbar: I would never criticise someone for that. I would rather somebody go to one march than none at all. People are suddenly realising how necessary it is to stop the gears of this machine, this late capitalist machine. A system that has given us ecological collapse, fascists in power all over the world and state-sanctioned genocide. So I go to the marches, I make the calls and I do the work that I feel is incumbent upon me. But what I also mean is, I get a paycheck, I have a house and I’m wearing shoes that cost more than they need to. No one has all the solutions and we shouldn’t beat ourselves up about that. Every person can do more. I think constant movement towards the solution is what makes us good.

Can poems be held up as an example, with the aim of changing the way we think about societal issues or the world at large?

Akbar: I wouldn’t want my neurosurgeon basing his work in the operating theatre on a poem he had read about the brain, or the person installing solar panels along the highway to base his work on a poem. But poems can act as a catalyst for new impulses. I have certainly been compelled into action on reading other people’s poems and hope my own poems are of practical use to others. Maybe a poem stokes the neurosurgeon’s curiosity about the brain. Maybe a poem incites a desire in the engineer for green engineering solutions. But elevating poems to such a status that they are supposed to do everything for us is unfair to the art form itself.

In the past, you have spoken about the parallels between reading poetry and praying. What did you mean by that?

Akbar: In our household, we spoke Farsi. Then when we came to America, we spoke English. But we used to pray in this magical third language, Arabic. We made these sounds come out of our mouths and didn’t know what they meant. It was like listening to Mozart or Debussy. When I was a tiny boy and memorised these prayers, I knew that if I said them earnestly and sincerely, there was emotional data being conveyed. Metaphysical and psychological and historical data stripped of all denotative meaning. I knew that if these sounds came out mellifluously, they would open up a channel between the divine and me. And that’s exactly what poetry does. You speak language mellifluously, you speak language urgently and it opens up a channel between you and the divine. My conception of that hasn’t changed since I was five years old.

This year, you wrote an essay about fasting for the entirety of Ramadan for the first time. What was your creative output like during that time and why did you want to share it with the world?

Akbar: The essay was the most complete thing that I wrote during that time and it wasn’t much of an essay. I didn’t write much else. I painted a little, but mostly I slept and read. I watched a lot of movies. I walked a lot. If you read the essay, you can see how I was trying to figure out what was happening to me. Why am I doing this, why am I making myself feel this way, what am I trying to get out of this? Does it mean anything? Does it matter if it doesn’t mean anything? I had no answer to any of these questions and writing the essay was a way for me to explore those ideas. And then it didn’t seem to hurt anything to give the essay to the world.

In your poem "Unburnable the Cold is Flooding our Lives" you write, "My hungry is different from their hungry" and "Intent arrives like a call to prayer and is easy to dismiss". Is poetry a way to explore varying degrees of religiosity, including your own faith?

Akbar: I must admit my poems are so tethered to my spiritual life and practice, that they are a way of illuminating a part of me that I can’t directly touch. For example, there’s a part inside your brain that works as a flashlight. If I tell you to close your eyes and feel the tip of your index finger, you can suddenly feel it with your brain, without touching anything. For me, poems are a way of removing that flashlight. You can’t reach your spiritual life or soul the same way you instinctively can your fingertip. There is so much I can do in a poem that I can’t do in real life. Something happens when I write that doesn’t come from me directly. Some may call it God or "the muse", or "getting in the groove"; I’m not interested in defining it. I just know that something happens that is not confined to me or my intelligence – that there’s something far more powerful than me.

Fariduddin Attar’s "The Conference of the Birds", one of the seminal works of Islamic mysticism, has recently been published in sumptuously illustrated German translation. It ... END_OF_DOCUMENT_TOKEN_TO_BE_REPLACED

In "Iran. Die Freiheit ist weiblich", journalist Golineh Atai describes the dogged resistance of courageous Iranian women against the Islamic Republic and the mullahs who have ... END_OF_DOCUMENT_TOKEN_TO_BE_REPLACED

The violent death of 22-year-old Mahsa Amini has achieved something the entire opposition has failed to do during the 43-year rule of the ayatollahs in Iran: almost the entire ... END_OF_DOCUMENT_TOKEN_TO_BE_REPLACED

Like Christianity, Europe's history is one of migration. Both have strong roots in the Orient and in cultures thousands of years old. Cultural historian Bernhard Braun invites us ... END_OF_DOCUMENT_TOKEN_TO_BE_REPLACED

A lot is happening in Syria’s Sweida Governorate – foreign intervention there is unprecedented both in terms of scale and number of actors – yet Damascus remains the dominant ... END_OF_DOCUMENT_TOKEN_TO_BE_REPLACED

Russia is leaving no stone unturned in its attempts to make the Islamic Republic an ally in the war against Ukraine. Fortunately for Vladimir Putin, the mullahs in Tehran are ... END_OF_DOCUMENT_TOKEN_TO_BE_REPLACED
Author:
Schayan Riaz
Date:
Mail:
Send via mail

END_OF_DOCUMENT_TOKEN_TO_BE_REPLACED
Social media
and networks
Subscribe to our
newsletter