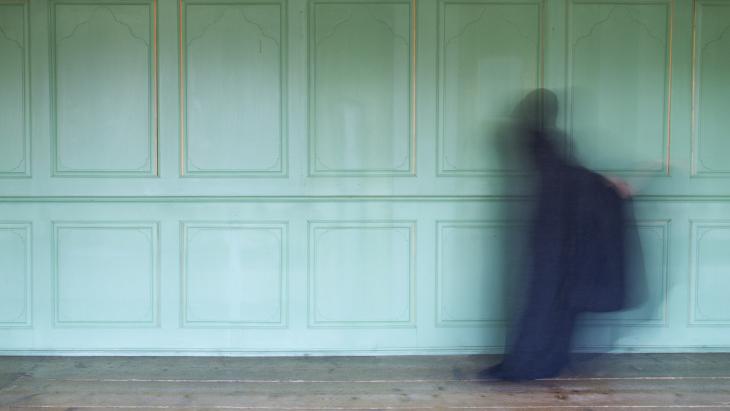 "Opposition to the religious patriarchal system is female"

As an artist, she translates experiences into images – for her political engagement, she was brought to trial. The Iranian contemporary artist Parastou Forouhar talks about idyllic places and war, suicide and opulence, and how women in Iran are fighting for equality. Interview by Siri Goegelmann

Ms. Forouhar, on 8 March – International Women’s Day – women take to the streets to fight for their rights. Does this day also play a role in Iran?

Forouhar: Yes, absolutely! Everything that has to do with demanding equality is present symbolically on this day. Women take advantage of this and have been organising meetings on International Women’s Day for years even though, time after time, participants are arrested. In addition to that, women have organised regular campaigns on 8 March. For example, two or three years ago women met in the metros, singing, congratulating each other and casting off their headscarves.

In your work "Domestic Suicide for All Seasons", you created 12 calendar pages. Each page shows a woman committing suicide in the midst of a beautiful, colourful, ornamental pattern. What were you looking to achieve with the combination?

Forouhar: Each of these images is full of patterns and beauty, similar to miniature paintings from the ancient pictorial language of my culture. I wanted to take this beauty and opulence, depicting these suicide scenes with in it. It is a contradictory concurrence: a world full of beauty, and a woman taking her own life. 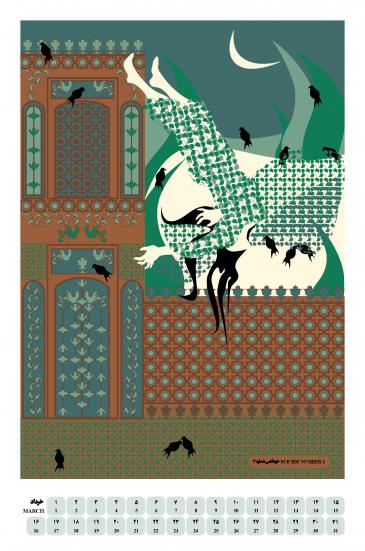 A world full of beauty, and a woman taking her own life: "Each of the images is full of patterns and beauty, similar to miniature paintings from the ancient pictorial language of my culture. I wanted to take this beauty and opulence… there’s a parallel between revealing and concealing. Looking at the image, you might be somewhat shocked that you find it beautiful in spite of everything," says Forouhar

It’s unclear whether this terrible incident is embedded in this aesthetic world or whether the incident is being kept hidden within the world. There’s a parallel between revealing and concealing. Looking at the image, you might be somewhat shocked that you find it beautiful in spite of everything.

Where did you get the idea to draw on suicide for your art?

Forouhar: The idea for the work arose as early as 1997. I come from an opposition family. My parents, who fought their whole lives for democracy and the rule of law, were murdered by the Iranian secret service in 1998. They were editors of opposition news bulletins that, at the time, they sent via fax. I was already living in Germany then and was just starting my artistic career. These news bulletins informed me of things that went against the official image of Iran. Again and again, I read about women who had taken their lives.

You have been living in Germany since 1991 and your work is internationally renowned. Have you also shown "Domestic Suicides for All Seasons" in Iran?

Forouhar: In 2016 I wanted to produce multiples of the calendar through a gallery in Iran. I think multiples are an exciting format, especially for Iran, because people can acquire art for little money. But before the work could be completed, the police marched into the printer’s and confiscated the print sheets.

The publisher gave me the few copies that had been printed before the attack, those that he managed to save in an adjoining room. Essentially, the action failed because of censorship.

Does this happen to you often?

Forouhar: Yes, unfortunately, I’m frequently prohibited from exhibiting my work. In 2017 I was even brought to trial because of one of my works. The charge was blasphemy, but essentially it was directed against my political activism. I was sentenced to five years on probation.

The same year you created the photo series "The Grass is Green, the Sky is Blue, and She is Black". A person is moving gracefully down the alleys of an idyllic place, through nature and the rooms of an old monastery. What’s the story behind this work?

Forouhar: I created the work during a residency in Stein am Rhein. The residency was really an experience because I suddenly found myself in this idyllic place. I lived in a little castle and saw this idyllic landscape out my window – green and very European.

At the same time, one of those gruesome phases of the Syrian war was happening. Terrifying images of children gasping for air during chemical attacks on civilians circulated in the news. The contrast between the reality outside my window and the reality happening in the region where I’m from was simply unbearable.

At the time, a few women from Stein am Rhein met every Wednesday with a group of refugees, mainly women and children. There was cake, and the only common ground was knitting and sewing. I went to these meetings every Wednesday, and each time, I had the feeling I couldn’t breathe.

Everyone was making an effort, and yet failure lay heavy in the air. It was like trying to hug someone and always reaching into empty space. The people just didn’t really connect to one another. Perhaps the ambivalence between this idyllic Swiss town and the people who were catapulted there from Syria was just too great. It was hard to bear the atmosphere of impossibility. 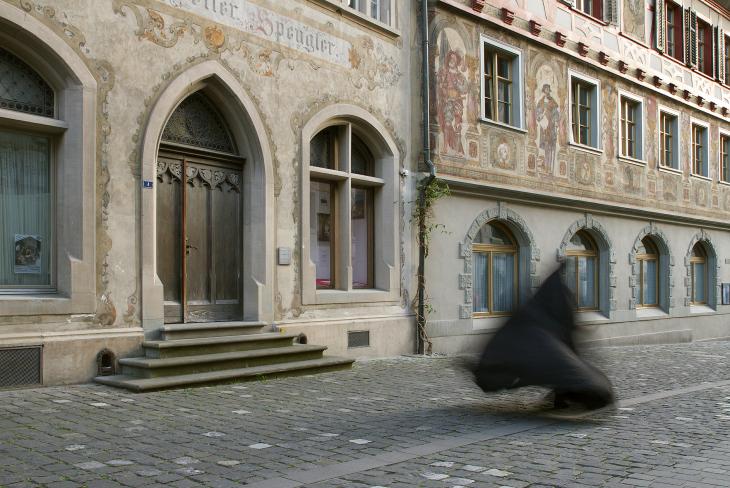 Born in Teheran in 1962, Parastou Forouhar is considered one of the most famous contemporary Iranian artists. In 2011 she contributed to the ifa exhibition "Political Patterns – Changing Ornament". She was awarded the Sophie von La Roche Prize from the city of Offenbach in 2012 for her contribution to the equality of women. Forouhar has been a professor of Fine Arts at the Kunsthochschule Mainz since 2019

Why is the person in the images draped in a chador?

Forouhar: The floral silk material of the chador is very beautiful and is particularly vibrant. It leaves a beautiful essence in the room, like when painting with watercolour. But the covering also encapsulates an element of hiding oneself, of refusal. The figure in this work is an absolutely foreign figure. Beyond the gestures and the ephemerality of her presence, you see nothing of her. And yet, she appropriates the space as she skips through the beautiful rooms of the monastery or darts down the alleys – like a shadow, a spirit, with feet that don’t touch the ground. It’s this kind of presence, just being in a room and not being overlooked, and occupying a space also as a feminist act.

Occupying a space, making yourself heard. What role do the protests of women in Iran play at the moment?

Forouhar:  I think that any progressive presence of women shakes the power of this system. It’s extremely important and inspiring – not just for women, but also for the whole society wishing to emancipate itself from the Islamic Republic’s machinery of religious patronisation and oppression. The oppression of women is also a pillar of the system. Yesterday I read that a leading religious cleric in Isfahan said that God is against women riding bicycles.

Just making such a statement! Fom a distance it’s laughable. But it shows how important it is for them to keep women under their control. That’s why, in my opinion, it’s obvious that any opposition to this religious patriarchal system is female. This is not a sociological conclusion, but rather my explanatory approach – a lovely image and a lovely thought.

In the autumn of 2021, Parastou Forouhar’s work will form part of the BLACK / WHITE exhibition in the Sulaymaniyah Museum in Iraq. The exhibition is curated by Gudrun Wallenboeck and sponsored by the ifa Exhibition Funding Programme. ifa (Institut für Auslandsbeziehungen) is Germany's oldest intermediary organisation for international cultural relations. It supports artistic and cultural exchange in exhibition, dialogue and conference programmes, and acts as a centre of excellence for international cultural relations.

Among Muslims, the image of women as "cossetted hijab-wearing princesses" is frequently invoked. But Muslim women have long wanted to be more. In her essay, Karoline Roscher- ... END_OF_DOCUMENT_TOKEN_TO_BE_REPLACED

The USA and NATO plan to withdraw from Afghanistan by September. The operation is risky, the outcome uncertain. Many Afghans fear civil war. The quake on the Hindu Kush will also ... END_OF_DOCUMENT_TOKEN_TO_BE_REPLACED

Even in times of war and pandemic, refugees are still being deported to Afghanistan. Several deportation flights have taken place in recent weeks alone. Since those affected often ... END_OF_DOCUMENT_TOKEN_TO_BE_REPLACED

On 7 March, Switzerland became the latest European country to vote in favour of a so-called "burka" ban. It was yet another feather in the cap of the right-wing populist Swiss ... END_OF_DOCUMENT_TOKEN_TO_BE_REPLACED

German Middle East analyst Guido Steinberg and television journalist Ulrich Tilgner have both published new books on the conflicts in the Middle East. Their analyses and their ... END_OF_DOCUMENT_TOKEN_TO_BE_REPLACED

END_OF_DOCUMENT_TOKEN_TO_BE_REPLACED
Social media
and networks
Subscribe to our
newsletter