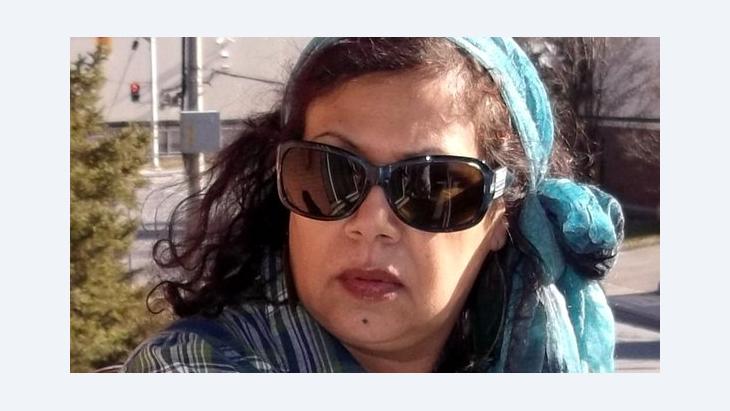 Iraqi author Hadiya Hussein has been away from Iraq for more than a dozen years, yet her fiction is still filled with its concerns. Her 2004 novel "Beyond Love", recently published in English translation, is full of exile, separation, and love. Hussein talked with Marcia Lynx Qualey about home, memory, and how living outside the country affects her writing

Was there a moment when you began to write, in reaction to something?

Hadiya Hussein: There was no particular thing or event that pushed me towards writing. However, my childhood environment gradually prepared me for it. I was raised in a family that loved singing and poetry. My father was colloquial poet, and most of my relatives were either poets or memorized poetry. We had a gramophone and many records from the most well-known Iraqi and Arab singers. Our house was located on Tigris River, one of the biggest rivers in Iraq, where my imagination was fed by the river's legends and its impact on the lives of the Iraqi people. My father was the one who encouraged me to read and brought me many books.

At the very beginning of my literary path, I thought I might become a major poet, especially after I won first prize among the schools in Baghdad. But later, my readings interests widened and varied, and the novel and story became my top priorities.

What is your relationship with Iraqi writers and readers?

Hussein: Since I left Iraq thirteen years ago, I have been in underground contact with some writer friends inside Iraq, as my name was blacklisted by the former regime. After the collapse in 2003, it became easier to communicate with other writers.

Does being away from the country where your work is read give you a sort of freedom? Do you imagine that you would write differently if you were in Iraq, or in Jordan, where you spent many years in exile?

Hussein: Although I left Iraq in 1999, I wasn't separated from it in my writing, particularly as I was writing my novels. Therefore, the places and characters in my seven novels were Iraqi. I write against the wars that distorted the beautiful features of my country. 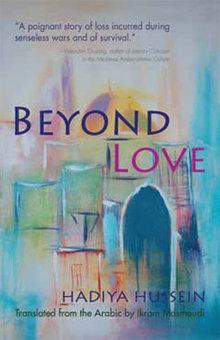 "A a portrait of a nation", according to Arab literature expert Roger Allen: Hadiya Hussein's "Beyond Love"

​​Indeed, I feel closer to my country when I'm away. It is like a work of art: It gets clearer the more we step away from it. Leaving Iraq granted me the freedom to express all I wanted to say while I was living inside, under constant suppression. As for Jordan, I never felt myself a stranger there. Jordan opened its heart to me and helped me overcome the pain and keep the distance to my country short. There, I was among people who shared the same language, the same history, and the same spirit. That's where I wrote most of my novels and collections of short stories and my cultural articles.

Being away from Iraq has its painful side and it also negatively impacted my writings. I didn't experience the last war and its consequences, the unrestrained murders. So this part is absent, or is not fundamental, in my writings. On the other side, being away has a positive impact, as I am free: I wrote about the past wars, which I experienced, the severe injustice and militarization of life, and the disappearance of youth into the regime's hidden prisons. These were crimes that went unrecognized by the world, or were recognized but not discussed. I wrote without fear of the regime's infamous repression, although it had agents in all neighboring countries.

How do you conceive of censorship, self-censorship?

Hussein: Censorship is found the world over, although in degrees. In Arab countries, it is a disaster, because the writer feels his texts may not reach readers because of a decision by a censor who usually lacks a literary background. This censor is a tool of the regime, aroused by some phrases here and there, that arbitrarily lead him to reject the text.

But the hardest is the self-censorship based on fear of a system that frightens people into remaining on the side of the rulers. Thus fear accretes inside the creator, limiting him, and in return the characters of the novel are suppressed. That's why the writer who rids himself of this censorship reaches the minds and hearts of the readers more quickly than those who fear the two censorships.

Creativity doesn't live under the umbrella of fear, but in the vast space of freedom. My last novel, titled To Fear, is about this kind of fear that has eaten us up since the early 1990's, after the uprising against the Iraqi regime reached from the far south to the far north, and led to the regime using its strongest repressive tools to end it. In this novel, I also addressed the fears of the Iraqi citizen, who has become even more fearful of a slip of the tongue than an actual, physical slip.

The relationship between "history" and "memory" seems to be a thread that interests you. To what extent do you do research, and when do you rely on your own memory and imagination?

Hussein: I'm more interested in oral history, such that I closely study the lives of those around me and those of my generation. Written history, on the other hand, is distorted because it is written by those in power. However, if I am in need to it, I carefully review all information I come across. And as for memory, I write my novels and stories from its never-ending resources. With time, personal memory becomes one with public memory, particularly where the nation's wounds are bigger and its ordeal deeper than mine. That's why I can't go without writing about my country's disasters, although I am away. 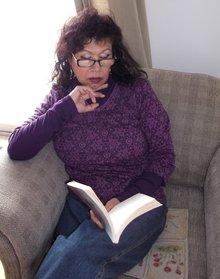 "I write against the wars that distorted the beautiful features of my country." - The Iraqi writer Hadiya Hussein

​​When it comes to a real incident, I do research and study. Then I may take a small part of that and build my novels around it. But fiction writing doesn't require perceiving the events as they were – the art and imagination must have their way. The novelist's mission is not like the historian's, so we can omit, add, or change the incident in our novels.

Does living in Canada change how you understand your audience, how you write and shape your fiction?

Hussein: As long as I write in Arabic, I am writing to Arab readers. Frankly, in this current stage, I don't think of the Canadian reader because I don't write in his language. Perhaps our relationship will be reinforced by the translation of my works or when I become fluent in English and write in English.

The language barrier is the controlling factor. I work hard to overcome this obstacle and I decided – after I finish my current novel – to make an effort to learn English and to read literary works in the original language. Don't forget that I arrived in Canada only recently, and my work has changed in that I'm using Canadian characters.

Do you think it changes your characters at all – or their relationship to the West –, you being in Canada?

Hussein: The characters in a creative work are something different from reality. If there is some change in a character's relationship to the West, then this is due to the context of the novel. My attitude towards US as a nation is different from my attitude toward the nation's politics. I respect the American people, but I have a different view of America's policy in third-world nations. For the sake of brevity, I'll focus on what happened in Iraq.

It is true that the US liberated the Iraqi people from the dictatorship, but look at the price the Iraqis are paying. It is a high price: thousands of murders and the country destroyed.

When the American army stepped into Iraq, they didn't protect the borders and left it prone to terrorists, who burned Iraqi institutions and stole its civilization, as for instance in the history museum and the Iraqi House of Manuscripts. All of this happened in front of the American soldiers. The state collapsed and the army was dissolved by the American military governor. The new government was based on a sectarian system, and the people are still suffering.

How do you see the near-future of Iraqi writing and publishing? Is it possible things might get better?

Hussein: Concerning the future of writing and publishing in Iraq, I'd like to say that Iraqi production is considerable, but there is no cultural institution to take care of it inside Iraq, where there is only one governmental publishing house. There are very few private houses, but most of these are prohibitive to writers because of the high costs required by the publisher. This is different from how things work in developed countries, where the author can earn his life by publishing his books. That's why I am not optimistic regarding the future of the publishing in Iraq, in light of this imbalanced equation. Unless things change, this is a difficult matter at least within the coming years.

The clashes in Baghdad between supporters of Muqtada al-Sadr and pro-Iranian militias show that an intra-Shia power struggle is in full swing. An analysis from Cairo by Karim El- ... END_OF_DOCUMENT_TOKEN_TO_BE_REPLACED

Bachtyar Ali sends the hero of his latest novel – "Mein Onkel den der Wind mitnahm" – literally flying. Jamshid is so thin after his years as a political prisoner that a gust of ... END_OF_DOCUMENT_TOKEN_TO_BE_REPLACED

In this essay, renowned Lebanese journalist and writer Hazem Saghieh asks whether the Arab Levant, which stretches from Iraq in the east to Egypt in the west, will remain an ... END_OF_DOCUMENT_TOKEN_TO_BE_REPLACED

Climate change is taking its toll on communities in Iraq. Younes Ajil turns on the tap in his home but nothing comes out. Villages in the south of the drought-hit country are ... END_OF_DOCUMENT_TOKEN_TO_BE_REPLACED

END_OF_DOCUMENT_TOKEN_TO_BE_REPLACED
Social media
and networks
Subscribe to our
newsletter