Born in Iraq, you emigrated to the United States in 1991. You write in Arabic, but your books are all translated into English. Do you see yourself as an Iraqi or as an American author?

Antoon: As an Iraqi author. My mother was American, I grew up in Iraq. For a long time, all my relatives said I was half-American, until I believed it myself. Still, it wasn’t easy to arrive in a country that had just bombed my homeland back into the pre-industrial age before slapping it with sanctions.

How does one write about violence without exploiting it?

Antoon: In Iraq, the destruction of the state and state institutions has pushed people towards a nationalist stance from which they mourn the past. Or they allow themselves to be split into camps. That was the way things were in 2003: at the time, you were either for Saddam or for the American invasion. A dual position was not allowed. So for me as a writer, the challenge is this: how does one portray Iraq in the course of its history without lapsing into sectarianism or nationalism? How does one do justice to the complexity of the situation of 2003, for example, without picking up the dichotomy of dictatorship and invasion? It is counterproductive to portray Iraq as nothing but a place of chaos and violence, because doing so simply replicates the idea that Iraq has no history, that things were always this way. 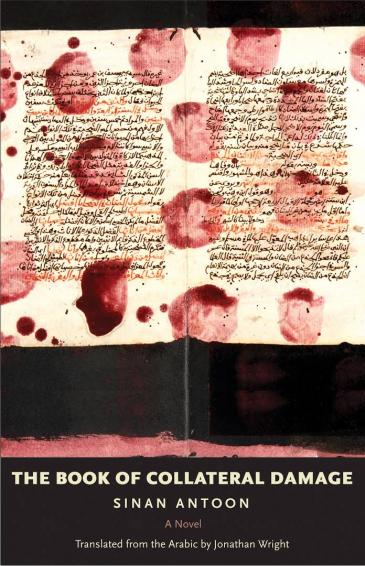 Sinan Antoon: "'The Book of Collateral Damage' is not an autobiographical book, although there might be some similarities. My sense of alienation in the U.S. isn’t just due to American policies on Iraq, it also has to do with 'whiteness' and the way in which American liberals ignore their complicity in the nation’s history of violence against Afro-Americans and native peoples"

That’s very true: when we talk about Iraq, then usually as a region ravaged by war – we rarely talk about its culture.

Antoon: And when we do, then about archaeology. I don’t want to generalise, but there’s a tendency to regard certain parts of the world as museums, with a once-magnificent culture that has somehow been frozen in time.

So when you talk about modern Iraqi culture, what are you referring to? To a milieu based in Iraq or in exile?

Antoon: Both of these. But I’d actually like to mention something else. Few people in the West are aware that 20th century Iraq was a vibrant, propitious society and I see myself as a product of this tradition. For example: modern Arabic poetry as a revolt against traditional literature began in the 1950s in Iraq. Two poets, a man and a woman, Badr Shakir al Sayyab and Nazik al Malaika, began to write in free verse form, breaking with the traditional form of Arabic poetry. This didn’t just come out of the blue, it arose from a nascent middle class, a good system of education and of course a rich past. The same goes for art. Yes, there were Assyrians and Sumerians, but why do we never talk about the 20th century? Why do people know so little about it? Who is benefitting from this?

And what’s your answer to that question?

Antoon: Not many people will like my response. I believe it is part of an orientalist narrative that regards civilisations as a linear continuum, in which the West is somehow always out at the front. It happens intuitively, not explicitly. And in the United States, this narrative also serves to make it clear that these old civilisations need to be protected. The paradox is: we bomb them, and we save them. Yet, as well as the horror under Saddam Hussein and the Gulf War of 1991, it was also the sanctions between 1990 and 2003 that destroyed the economic and social fabric of Iraq.

This is the subject of your latest publication. "The Book of Collateral Damage" is a kind of archive, a catalogue full of things that used to exist in Iraq; things that have now been lost.

Antoon: I imagine the terrible concept of collateral damage as a black hole swallowing everything up: houses, people, animals, trees. Everything that represents life. But the book also deals with the impossibility of archiving. I have tried, through the character of a crazy book seller, to explore the question of how to write the story of a war without excluding anything. But if you want to include everything destroyed in just the first minute of a war, then you’ll never get past that first minute.

In "The Book of Collateral Damage" there’s a character that resembles you. An academic who’s escaped Iraq and who’s struggling to find his place in New York …

Antoon: It’s not an autobiographical book, although there might be some similarities. My sense of alienation in the U.S. isn’t just due to American policies on Iraq, it also has to do with 'whiteness' and the way in which American liberals ignore their complicity in the nation’s history of violence against Afro-Americans and native peoples. All these damned liberals are always in favour of war, they learn nothing and view the state uncritically. Then there's the way they always say "we". Sometimes I think: if there’s one good thing about living in a dictatorship it’s that you learn there is no "we". In dictatorships people know that there’s a populace and a government, and these are not the same thing.

In Doha, Arabs from Morocco, Tunisia, Egypt and Algeria are gathering to celebrate the first ever FIFA World Cup to be held on Arab soil. The criticism from Europe? Over the top, ... END_OF_DOCUMENT_TOKEN_TO_BE_REPLACED

Canan Topcu came from Turkey to Germany as a child. In her essay, she describes how bothered she was by the racism she encountered in her country of origin when she travelled ... END_OF_DOCUMENT_TOKEN_TO_BE_REPLACED

All organisers use major sporting events like this year’s FIFA World Cup in Qatar primarily to advertise their country and promote a slick public image. This is not something we ... END_OF_DOCUMENT_TOKEN_TO_BE_REPLACED

Lamya Kaddor, MP for Germany’s Green Party, visited Qatar with a group of parliamentarians. In interview with Claudia Mende, she advocates a differentiated picture and urges that ... END_OF_DOCUMENT_TOKEN_TO_BE_REPLACED

COP27 in Sharm el-Sheikh is turning into a PR disaster for Egypt’s military regime. Instead of praise for the host, the news is full of solidarity for imprisoned activist Alaa ... END_OF_DOCUMENT_TOKEN_TO_BE_REPLACED
Author:
Lena Bopp
Date:
Mail:
Send via mail

END_OF_DOCUMENT_TOKEN_TO_BE_REPLACED
Social media
and networks
Subscribe to our
newsletter