Irene Khan, not only the first woman secretary-general of Amnesty International but also the first Asian and Muslim to hold that position, speaks to Ayse Karabat about the cultural relativity of human rights debates and their relation to power and politics 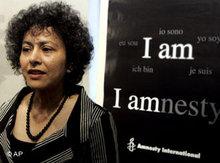 Irene Khan: "Change usually comes when people believe they are being treated fairly and equally and there is confidence on both sides"

​​You are the first woman, first Asian and first Muslim secretary-general of Amnesty International. How do your identities affect your position?

Irene Khan: Amnesty was created in 1961. I was appointed the secretary-general of Amnesty in 2001. Why did it take amnesty 40 years to appoint a woman? If you look at our membership, we have many women. I think organizations reflect society; and even within Amnesty there has been some reluctance to accept the leadership of women, and that's why it has taken so long. The existence of discrimination is a question of leadership: Whether you can confront and overcome it or whether you tolerate it. I think the leaders should not wait for public opinion to turn, but should influence the public opinion on these issues.

Today cultures are interacting more than ever in many countries in Europe, for example Germany is now multi-ethnic, multi-cultural. But what is integration from a human rights perspective, and how can discrimination be addressed and tackled?

Khan: I think it is a challenge between maintaining the diverse multicultural society on the one hand and, on the other hand, also accepting when you are coming to another society and the values and systems of that society. I think one has to find a balance. Both sides have to change and I think there has to be openness to change on both sides. Cultures are not static entities. So when Turkish people go to Germany, the German culture is changed by the presence of Turkish people.

But Turkish people, by going to Germany, also have to accept that some applications cannot be the same as in Turkey. So on both sides there needs to be openness and understanding. I think what is very exciting and interesting in today's world is the opportunities that we have for multiple identities. 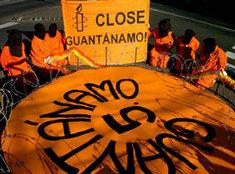 "Close Guantánamo!" Members of Amnesty International wearing Guantanamo-style orange inmate outfits stage a protest in Budapest, Hungary, January 2007, on the fifth anniversary of the opening of the detention facility in Cuba

​​ We need to recognize that people are not defined by a single identity, and the big issue is what is it that we have in common, not what divides us, and around what is common we can begin a dialogue. But there are things different about us too. It is enriches a society to learn from others and to change. Both sides have to change.

How can this dialogue and cultural exchange succeed?

Khan: I think the change usually comes when people believe they are being treated fairly and equally and there is confidence on both sides. If Turkish people feel discrimination in Germany – that they have been excluded – they will resist change. And if the Germans feel that Turkish people are in some way inferior, then of course there will be tension.

So I think, on both sides, creating the space for equality and equal dialogue helps actually to bring about change. You can't enforce many of the cultural changes. You have to allow them to emerge through discussion, dialogue and living together, and that's where freedom of expression, freedom of assembly and freedom of association are so important to create the space for interaction.

What about the debate over the cultural relativity of human rights; that the implementation of human rights can vary with culture? What is your stance on this? 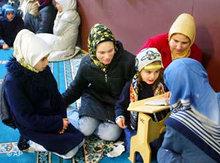 ​​I find in the context of women's rights in particular, it is very important that a lot of this debate take place inside the societies that are going to change. You cannot impose these debates from the outside, but you can support the debate, you can facilitate it, you can create the space for people who debate it. But they have to be convinced about the change themselves. Commitment has to come from inside. You cannot import human rights. It has to be home-grown.

These cultural relativity debates are mostly on women's rights, what is your opinion?

Khan: Gender violence is violence. To say it is a part of your culture, that you can beat your wife or that you can kill your daughter because she decides to marry someone that you didn't choose is totally unacceptable. It maybe part of your culture that you put your headscarf or choose not to put your headscarf on, but there has to be some internationally accepted standards against which you judge something as culturally acceptable or not acceptable.

You mentioned the headscarf issue. What is your position on this as a human rights defender?

Irene Khan has been secretary-general of Amnesty International, the world's largest human rights organization, since 2001 and is the seventh person to hold the position since Amnesty's foundation in 1961. Having studied law at the University of Manchester and Harvard Law School, specializing in public international law and human rights, Khan began her work as a human rights activist with the International Commission of Jurists in 1979. A year later she joined the United Nations High Commissioner for Refugees, where she worked in a variety of positions both at its headquarters in Geneva and in field operations. Khan has been the recipient of several academic awards, a Ford Foundation Fellowship and the Pilkington Woman of the Year Award in 2002.

END_OF_DOCUMENT_TOKEN_TO_BE_REPLACED
Social media
and networks
Subscribe to our
newsletter