Ishak Alaton is one of Turkey's most influential businesspeople of Jewish extraction. Hülya Sancak spoke to him in Istanbul about the current political situation in Turkey and minority rights for Jews, Kurds and Armenians in the country 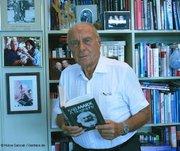 Ishak Alaton is a prominent Jewish businessman in Turkey. Born in Istanbul in 1927, he co-founded the Alarko Holding in 1954. He is currently the CEO of the group of companies

​​Under what circumstances can Turkey become a full member of the EU?

Alaton:We have candidate status under the Copenhagen criteria. In my opinion, though, we won't gain entry to the EU over the coming five to ten years. We still need a revolution in people's minds. The first thing we have to realise is that all people are born equal. We need to solve the Kurdish problem and make peace with the Kurds.

A large proportion of Europe's population is against Turkey joining the EU, and the politicians are swaying in the same direction – despite the beginning of negotiations. Has Europe already lost all credibility in Turkey?

Alaton: There are different opinions in Europe. Europe is not a homogenous structure. There is the Sarkozy and Merkel phenomenon: they have prejudices against Turkey and say the country isn't part of Europe. But alongside them there are also other voices supporting Turkey. I'm thinking of Spain and Sweden, for example, which provide a great deal of support for Turkey. But Turkey is also striving to come closer to Europe on the mental and intellectual level.

All this is a work in progress, and it takes time. There is no reason to distance ourselves from Europe and head in another direction. We're following Atatürk's example and coming closer to the West. We are a part of the West and we will integrate, I'm convinced of that.

People of Turkish origin living in Germany feel discriminated against and disadvantaged, even if they have German nationality. Is the situation similar for minorities living in Turkey?

Spain is one of the country's that actively supports Turkey's accession to the EU. The picture shows Spain's PM Zapatero, left, and his Turkish counterpart, Erdogan, in Istanbul at the 2006 Meeting for the Alliance of Civilisations

​​But I would like to emphasise one thing: in the history of the Turkish republic there have been many incidences of discrimination on the part of the regime and the bureaucracy. The word "we" meant the Sunni Muslims, the "others" were and are the Alevis, Kurds, Jews and the non-Muslims. This has kept alive a form of discrimination and hostility that doesn't exist in everyday life.

What is the background to this development?

Alaton: There is an interesting reason behind it, to do with financial assets. In Turkey, non-Muslims like Armenians, Greeks and Jews had significant wealth. People were envious of these riches, and laws were passed on the bureaucracy level. For example in 1974: a new law laid out the nationalisation of the entire real estate and monetary assets of non-Muslim foundations. The regime acted as if the assets had been nationalised, but large portions were then sold on again by the state. Great wealth forcibly changed hands – that was unjust.

Is the AKP more tolerant of minorities than other parties?

Alaton: Yes. We haven't experienced discrimination at the hands of the AKP government, but equal treatment. To be honest, I think there is no hostility to non-Muslims or Jews within the AKP whatsoever.

Do you think the AKP has a secret agenda?

Alaton: I know certain people are constantly repeating that accusation, to maintain suspicion of the AKP. The AKP has many enemies. But I find that attitude obsessive and paranoid.

Have you ever felt disadvantaged in Turkey due to your minority status?

Alaton: Very rarely. But it has never been a hurdle in my life. Belonging to a different religion, being Jewish has never been a problem. Society didn't regard me as "different". I'm seen and understood as a respectable and respected person in Turkey and by Turkish society. I enjoy it. I'm very happy about that.

Are there any truths that Turkey ought to be confronted with, such as the unresolved issue of the Armenians?

Alaton: Of course, that's very important. The country's attitude to the Armenian issue is changing for the positive very quickly. People have started thinking about the issue, and that is also breaking down the prejudices. Nowadays everyone knows what happened in 1915.

It's important for people to talk about it and admit that there's a shameful blot on the country's history. The degree of this shame – whether it was genocide or not – is another story, as Hrant Dink always pointed out. The first step is confronting history. It's ridiculous to deny it ever happened. We have to be able to discuss it and talk about it, and – if necessary – we have to apologise.

An apology is unlikely to be enough; perhaps that's why the state is trying to avoid a discussion? There is always the threat of demands for compensation…

Alaton: That's all nonsense. The claims that people have a right to land or compensation payments are no more than lies. They can't demand either land or money. The whole thing is just an apology: "Yes, it happened and we are sorry, we apologise." We've been carrying this burden for eighty years, and instead we could simply apologise. Why is that so hard?

I say to all Armenians, your suffering is my suffering. I believe that apologising is not a sign of weakness. That's why I apologise.

What do you have to say to the Europeans about the importance of Turkey?

Alaton: Turkey needs Europe too much. But Europe needs Turkey too, because Turkey is part of Europe. So many foreigners live in Turkey and millions of Turks live in Europe. We're already living together side by side. That's why we have to get to know and understand each other better. We have to create various levels of dialogue.

Jews in Turkey
A Quiet yet Fragile Happiness
More Jews live in Turkey than in any other Muslim country in the world. They are struggling to regain the normality they lost in the bomb attacks of 2003 and hope that their native country will accede to the EU. Tobias Asmuth reports from Istanbul

END_OF_DOCUMENT_TOKEN_TO_BE_REPLACED
Social media
and networks
Subscribe to our
newsletter