An Ancient Game of Architectural "Tit for Tat"

Jonathan M. Bloom, who lectures in the history of Islamic art and architecture at the Boston College of Arts and Sciences, considers the Swiss decision to prohibit the construction of minarets to be a slap in the face of the Muslim community in Switzerland. Eren Güvercin asked him about the origin and history of the minaret 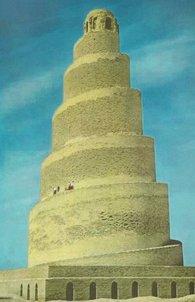 The minaret, a distinctive symbol of Islam. Pictured: the Great Mosque of Samarra, a 9th century mosque located in the Iraqi city of Samarra

​​Minarets have become a distinctive symbol of Islam. But what is the origin of the minaret? Where did it come from?

Jonathan M. Bloom: The earliest (i.e. seventh-century) mosques did not have minarets. However, some – but not all – mosques had them by the ninth century, so they appear to have been "invented" in the late eighth or early ninth century. There have been many theories about the origins of the minaret – that they came from church towers, from watch towers, from lighthouses, from signal towers, from victory columns, etc. – but none of them is true. My research has shown that the earliest minarets had nothing to do with the call to prayer and so they were probably designed to be exactly what they are today, a symbol of the presence of a mosque and therefore a symbol of Islam. Only later did these towers acquire the secondary meaning of being the place from which the call to prayer is given.

So is the minaret a political symbol or a form of Islamic architecture?

Bloom: The minaret – along with the dome – is one of the most characteristic forms of Islamic architecture, and the sound of the adhan, the call to prayer, is as typical of Cairo, Istanbul or Riyadh as the sound of bells is of Rome. In West and East alike, minarets have become such a distinctive symbol of Islam that political cartoonists use them as shorthand to indicate a Middle Eastern or Islamic setting; similarly, authors and publishers use the word "minaret" to refer to the Muslim world or Islam itself. 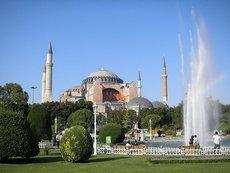 From church to mosque: After the Ottoman sultan Fatih Mehmet conquered Constantinople in 1453, one of his first acts was to order a minaret added to the Hagia Sophia

​​Are the minarets still potent symbols of Islam?

Bloom: Whether or not minarets are actually used to call the faithful to prayer, they remain potent symbols of Islam, and have sometimes been targeted accordingly. During the horrendous civil war in Kosovo, for example, Serbian forces regularly placed explosives inside minarets, not only destroying the towers but ensuring that they would collapse onto and damage the adjacent mosques. With this destruction, Serbian forces wanted to destroy the most visible symbols of the presence of Islam in the landscape. Such clashes between competing visual cultures are unfortunately not only recent news, although modern weapons and explosives tend to make the results more dramatic. After the Ottoman sultan Fatih Mehmet conquered the Byzantine capital of Constantinople in May 1453, one of his first acts was to order a wooden minaret added to the 900-year-old church of Hagia Sophia to signal its conversion to a mosque. The temporary wooden minaret was soon rebuilt in stone and three others added for good measure. As Mehmet and his successors built other mosques in their new capital, Istanbul's skyline came to be punctuated by dozens of slender, arrow-like minarets that gave the Ottoman capital a distinctive aspect and signalled to all that it was no longer the capital of Christian Byzantium but the new capital of an Islamic empire. 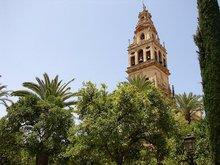 Architectonical "babushka" principle: tourists visiting the Mezquita in Córdoba can still climb the remains of the old minaret, intact inside the bell tower

Meanwhile, at the western end of the Mediterranean, as Christians wrested the Iberian Peninsula back from Muslims in the late Middle Ages, the victors transformed the great stone or brick minarets of Andalusian congregational mosques into church bell towers. The magnificent 10th-century minaret in Córdoba, once the pride of the Muslims' city, was encased in more stonework to give it a "Christian" look, and topped it with a belfry and a set of bells. Tourists can still climb the remains of the old minaret, intact inside the bell tower. From the perspective of the history of architecture, these episodes can be seen as rounds in an ancient game of architectural "tit for tat." Some 500 years earlier, Christians in ninth-century Córdoba had accused the Muslims of pulling down the "pinnacles" – that is, the bell towers – of their churches and "extolling their prophet" from their "towers and foggy heights". The Córdoba theologian Eulogius histrionically recounted how his grandfather had had to clap his hands over his ears to shield himself from the muezzin's cry.

Are there examples of mosques without minarets in the Islamic tradition?

Bloom: In many parts of the Muslim world – Malaysia, Kashmir and East Africa, for example – tower minarets were virtually unknown before modern times. In the 20th century, however, the expansion of visual communication and travel has homogenized regional architectural styles into an international "Islamic" norm of domes and soaring towers.

Fighting over the right to claim the skyline: mosque with minaret in Geneva, Switzerland

​​Nevertheless, one expert, Dr. Mohamad Tajuddin bin Mohamad Rasdi of the Universiti Teknologi Malaysia, recently stated that modern architects and their clients who build monumental mosques with fancy minarets, domes and muqarnas (a type of corbel used as a decorative device, the ed.) ignore the teachings of the Prophet. Other Muslims may disagree with Dr. Rasdi's interpretation of Islamic tradition, but there can be no doubt that while the beautiful adhan clearly dates back to the time of the Prophet, the minaret is certainly a later invention. When Islam was revealed in the early seventh century, Jews called the faithful to prayer with the shofar (ram's horn) and Christians used a bell or a wooden gong or clacker. Indeed, the sound of a bell wafting in the breeze from a distant monastery is a frequent image in pre-Islamic and early Islamic poetry. 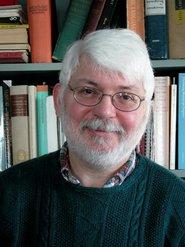 ​​In this context, we can well understand how 'Abd Allah ibn Zayd, one of the Prophet's companions, dreamt that he saw someone calling the Muslims to prayer from the roof of the mosque. After he told the Prophet about his dream, Muhammad recognized it as a vision from God and instructed Bilal, an Abyssinian freedman and early convert to Islam, "Rise, Bilal, and summon all to prayer!" Bilal, who was known for his beautiful voice, did so, thereby becoming the first muezzin. According to Islamic tradition, Bilal and his successors normally gave the call to prayer from a high or public place, such as the doorway or roof of a mosque, an elevated neighbouring structure or even the city wall, but never from a tall tower. Indeed, it is said that 'Ali ibn Abi Talib, the Prophet's cousin, son-in-law and fourth caliph, ordered a tall mi'dhana (a place from which the call to prayer was given, the ed.) torn down, because its height enabled the muezzin to see into the homes around the mosque. The call to prayer, 'Ali believed, should not be given from any place higher than the roof of the mosque.

Switzerland recently voted in favour of a ban on minarets because the majority of Swiss citizens see the minarets a symbol of "Islamicization".

Bloom: It is ironic that one of the first scholars to study the origin and history of the minaret was the Swiss Arabist, Max van Berchem, who wrote over a century ago. While minarets are technically not necessary parts of a mosque, they are widely viewed as desirable; prohibiting the construction of minarets is a slap in the face of the Muslim community in Switzerland. Can you imagine if the Swiss decided to prohibit the construction of bell towers on churches?

Is this resentment towards minarets a new phenomenon?

Bloom: No, it goes back to the Middle Ages in Spain, where Muslims and Christians fought over the right to claim the skyline. More recently there was uproar about the construction of a minaret in Oxford, because it might be taller than the fabled spires of the city's churches, as well as in Frederick, Maryland (USA), for the same reason.

Qantara.deDebate on the Swiss Minaret BanThe Hypocrisy of Islam's IndignationIn view of the precarious situation of religious minorities in Islamic countries, the uproar in the Islamic world over the Swiss referendum banning the construction of minarets is exaggerated and hypocritical, says author and media researcher Khaled Hroub Tariq Ramadan on the Swiss 'Minaret Ban'"Islam Is a European Religion"Populists in Switzerland fail to realize that Islam is by now a European religion and that Muslim citizens are largely integrated, says Tariq Ramadan in his commentary. However, part of the blame lies with Muslims, too, claims the Swiss Muslim scholar Mosque Construction and DialogueEven the Minaret Is AdmiredIn his essay Alen Jasarevic, architect of a mosque built in the town of Penzberg in Upper Bavaria, pays tribute to Islamic architecture. He hopes that the mosque in Penzberg will provide a shining example for other cities and communities

END_OF_DOCUMENT_TOKEN_TO_BE_REPLACED
Social media
and networks
Subscribe to our
newsletter