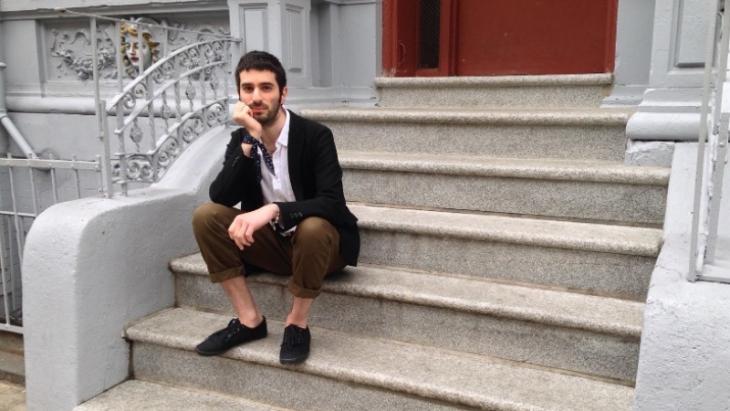 Joobin Bekhrad is the founder and editor of "Reorient", a well-known magazine for Middle Eastern arts and culture. Melanie Christina Mohr spoke to the author about art in Iran, rock ʹnʹ roll and his first novella

Mr Bekhrad, you were born in Iran and have spent the majority of your life in Toronto. If we had done this interview in Tehran, where would we have met?

Joobin Bekhrad: When Iʹm in Tehran, I often go to one of the many gardens. They are scattered all over the city. Itʹs a very green city, anyone whoʹs been will tell you that. And most of these gardens belonged to the aristocracy of the Qajar dynasty. The houses themselves are now little museums and the gardens surrounding them have been turned into cafes. They serve tea and snacks and coffee. Itʹs where a lot of artists and intellectuals hang out. Tehran is a very loud city and sometimes it really drives you crazy, but in these gardens you are in a sort of oasis, which is really cool. I expect thatʹs where we would have met.

Bekhrad: Iranian – thatʹs the only correct term. Persia is just a province. Itʹs like Italy and Rome. We wouldnʹt describe Italy as Rome – I mean, Rome is a part of Italy and Italy is the name of the country. I only use the term Persian when Iʹm talking about the language. We can refer to Omar Khayyam as a Persian poet because he wrote his poems in Persian. Or we can say of Cyrus the Great that he was a Persian ruler – but the term is often used incorrectly.

Some people, for instance, claim that the prophet Zarathustra was a Persian prophet. But he was actually an ancient Iranian and so not necessarily Persian. We call his language Avestan – itʹs an ancient Iranian language like Ancient Persian, but itʹs not Persian. A lot of Iranians refer to themselves as Persian out of shame - for the simple reason that Iran is associated with the Islamic Republic and Khomeini and everything that happened after 1979. But I personally would never describe myself as a Persian (even if, ethnically speaking, I am Persian); Iʹm proud to be Iranian. A Greek wouldnʹt suddenly start calling himself a Spartan just because something had happened in Greece. 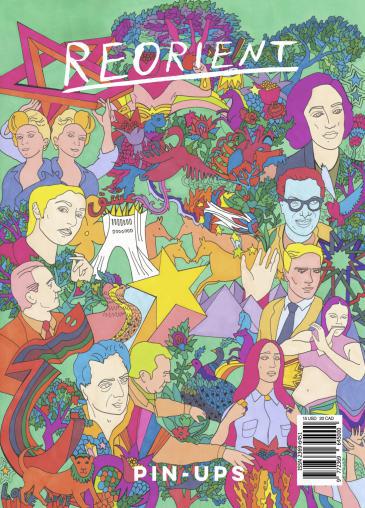 Rock ʹnʹ roll forever: founded by Robin Bekhrad in 2012, online magazine "Reorient – Middle Eastern Arts and Culture Magazine" showcases Middle Eastern artists and musicians who seek to distance themselves from the cliches associated with the region. "From the beginning the intention was to present another side of Middle Eastern countries and their cultures," says Bekhrad

You founded your magazine Reorient in 2012. How did it all start and whatʹs the aim of the magazine?

Bekhrad: The magazine combines my two passions: my love for Iran – although it covers the entire region and the areas that border it – and my love of writing. At first I produced most of the articles myself – not essays, as such, but short articles and interviews. And then other contributors started pitching in and the magazine started going in its own direction, finding its own voice, developing its own character. From the beginning the intention was to present another side of Middle Eastern countries and their cultures.

Of course, there were already people writing about similar topics, but I wasnʹt aware of any publication that blended these two approaches. In my opinion, the art of the region was always written about in a very academic, analytical way. But for me, Western pop culture – and in particular rock ʹnʹ roll – had shaped the way I viewed things. And so as an author I think itʹs important to make those connections – to start off in ancient Iran and end up with the Rolling Stones.

The art of the Middle East is often conflated with "Islamic art". Could you unpack this term a bit for us? Is it accurate, in your view?

Bekhrad: Itʹs actually a term that is misused and in many cases itʹs completely irrelevant and inappropriate. Say weʹre talking about Koran manuscripts – in which Persian or Turkish calligraphy also play a role – that canʹt all be subsumed under the heading of Islamic art. And itʹs not something we do with other cultures or religions: we donʹt call Andy Warhol a "Christian artist", do we? The problem is that Islam is kind of treated like a country. Take Iran: Persian miniatures are described as Islamic miniatures or examples of Islamic art. And thatʹs not true. I went to the Pergamon Museum in Berlin last year. There were artefacts from Iranʹs pre-Islamic period displayed in the area for Islamic art. Thatʹs very telling.

So why has it become so natural to misuse this term?

Bekhrad: Institutions in the West do it because itʹs easy. You donʹt have to think – you say Islamic art and people immediately think of the Middle East and Arabs. It is much easier than saying Iranian or Andalusian art, or even art from central Asia. The term Islamic art gives museums in the Persian Gulf, for example, the opportunity to bring together all these artefacts from Iran, North Africa, Spain – all corners of the globe, really – and fill their museums with them.

What value and what impact do you think art has within Iranian society?

Bekhrad: If you know Iranian culture, youʹll know we pretty much live and breathe art. Iranian artists use visual art to address issues, like artists everywhere. Poets like Khayyam, Hafez, Ferdowsi – these people were incredibly critical of their surroundings; they pushed for change and explored Iranian identity.

Contemporary Iranian artists – whether young or old – keep this flame alive and continue this centuries-old tradition. Iranian artists are capable of expressing themselves despite all the restrictions, especially when it comes to sensitive topics. A lot of songs are sung in the traditional vein. They are composed by these modern artists, though, they are singing the poems of Rumi, Khayyam, Hafez and others. They use them as a mouthpiece to address current issues. 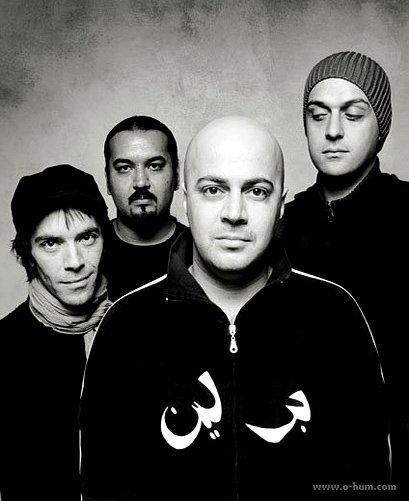 Relying on the rich lyrical tradition of their ancestors: rock bands such as Tehran-based O-Hum incorporate verses by the Iranian poet Hafiz into their songs, expressing their frustration with the political and social conventions of the Islamic Republic in the process. These days, the musical scope of Iranian protest songs is wide – from underground rock, hip hop, hardcore, blues and reggae through traditional music to mainstream pop

You donʹt have to verbalise your own protest; you can just channel Hafez. I find it really interesting to see that these poems are still relevant today – above and beyond the fact that theyʹre very beautiful – although they were composed a long time ago in a completely different context.

You can’t box Iranians in. We have been subject to Western sanctions for God knows how long. If that had happened to another country, in Europe for example, it would probably have collapsed after a while. But Iran has been standing on its own two feet since the revolution, for almost 40 years. After the revolution, everyone thought the film industry would go under, how can people go on making films there with all these restrictions? Nonetheless, we had people like Abbas Kiarostami and other luminaries. We know how to get our message across while keeping our heads on our shoulders.

Your first novella was published in 2016. What is Coming Down Again about?

Bekhrad: Coming Down Again was my first work of fiction. The story is set in Tehran. Itʹs about a teenager who is bored out of his mind one summer. He lives with his parents, of course and he really doesnʹt know what to do with himself – except that he loves his guitar and rock ʹnʹ roll. So he sits in front of the TV all day, waiting for his favourite groups to come on. His dream is to go to London, start a band and jam with his heroes.

The novel is written as a diary – everything is in the first person; there is no plot, no sequence of events. It is not a traditional story, not a traditional work of fiction, it is more atmospheric. The reason for that is that I wanted more than anything to capture that sense of boredom, unease, hopelessness and being lovesick. Itʹs also a love-letter to Tehran, declaring my love-hate relationship with the city. I love it more than others, but there are also things that really bother me. So itʹs more about describing a mood or an emotion than telling a sort of linear story. Iʹve always felt more drawn to that.

When I look at all the books on my shelves, I canʹt remember what some of them were really about – a few details are still there, but what actually happens in them has faded away. Then there are other books that had no plot that have stuck with me. They made a deep impression on me, captured a particular mood and that I can still remember. And quite simply, thatʹs what I wanted to do.

Joobin Behkrad is founder and publisher of "Reorient", an online magazine for contemporary Middle Eastern art. He has also translated Omar Khayyamʹs "Rubaiyat" – a volume of poetry, as well as a collection of stories and essays. In 2015 he was awarded the International Award for Art Criticism by the Royal College of Art in London.

Home
Print
Newsletter
More on this topic
"Reorient" – Middle Eastern Arts and Culture MagazineMusic and power in Iran: An instrument of propaganda and controlProtest songs in Iran: Tired of the kiss of the whip
Related Topics
Art, History of the Near and Middle East, Iranian music, Islam and the West, Islamic art, Islamic Revolution of Iran, Literature, Media dialogue, Musical worlds, Tehran
All Topics

EU parliamentarian Dietmar Koester criticises the Union's failure to speak up when faced with human rights abuses committed by its Middle Eastern allies, while pointing out that ... END_OF_DOCUMENT_TOKEN_TO_BE_REPLACED

U.S. President Biden has announced he will be excluding Saudi Crown Prince Mohammed bin Salman from future talks between Washington and Saudi Arabia. Is this just lip service that ... END_OF_DOCUMENT_TOKEN_TO_BE_REPLACED

The foreign policy direction favoured by Washington's new incumbent is putting a strain on relations with Turkey. The two nations look set to clash over a whole host of issues, ... END_OF_DOCUMENT_TOKEN_TO_BE_REPLACED

How can we truly appreciate the richness of cultures not our own? In her recent book "What is Islamic art? Between religion and perception", art historian Wendy Shaw explains the ... END_OF_DOCUMENT_TOKEN_TO_BE_REPLACED

In his controversial book published in 2020, French author Pascal Bruckner describes anti-Muslim sentiment as a fiction, claiming that the term "Islamophobia" is being used to ... END_OF_DOCUMENT_TOKEN_TO_BE_REPLACED

Several media reports in recent weeks have focused on the potential threat presented by Islamist groups in Germany. The discourse is fraught with generalisations, both sides ... END_OF_DOCUMENT_TOKEN_TO_BE_REPLACED
Author:
Melanie Christina Mohr
Date:
Mail:
Send via mail

END_OF_DOCUMENT_TOKEN_TO_BE_REPLACED
Social media
and networks
Subscribe to our
newsletter