"The Ayatollahs Want To Be Bombed"

Kader Abdolah's novel "The House of the Mosque" describes the impact of Islamic fundamentalism on the daily life of a tradition-conscious family. Ilja Braun spoke with the author about the novel, the situation in Iran and his status as an exile writer 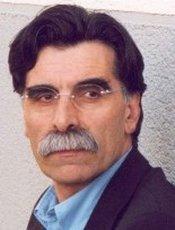 Kader Abdolah: "The Ayatollahs would like to go down in history as anti-American heroes"

​​You came to the Netherlands from Iran in 1988 as a political refugee, having already written a number of books in Persian. What was it like for you to start writing in Dutch?

Kader Abdolah: Arduous, incredibly arduous. I had to search for each single word. I worked like a jeweler: I picked up word after word, looked at it, sniffed at it and finally wrote it down. It was almost a craftsman-like activity, and it cost me a lot of energy. Especially with my first book, which I worked on for five years.

And did that change your books a great deal? Are the ones written in Dutch very different from your earlier ones?

Abdolah: When I came here 17 years ago I came as a Persian. But 17 years of struggling with the Dutch language have made me into a different person. Now I write my books with the mentality of a Dutchman. I look at my own culture from a distance of five, six or seven thousand kilometers. And because today I am writing for my Dutch, Belgian, European readers, I see it with completely different eyes than I did 17 years ago.

Where exactly does this difference lie?

Abdolah: For example, I wrote my last book, "The House of the Mosque" very specifically for my Dutch, Belgian, German and American readers, since it would not even have been necessary for an Iranian audience. I take my readers by the hand and let them peek behind the curtain. And because I've lived with the Dutch for 17 years, I know exactly what they know already and what they don't know yet, what they are curious about, what places I have to take them to.

In a sense you are bearing witness about your homeland?

Abdolah: Yes, exactly, it's a kind of testimony. In the Netherlands Kader Abdolah is someone people trust, so I say: don't you want to come with me? I'll take you along to my culture. Islam, the Koran, Iran and the Middle East – these are all issues that really interest people in Europe right now. People are curious about the Koran, the Islamic religion and old cultures. And I say: fine, just come along with me, I'll show it all to you.

But your book is also about the impact of the political on the private. You describe the life of a family that has lived for decades in a house by the mosque. During Khomeini's revolution it comes into conflict with the fundamentalists, even though it has always honored the Koran.

Abdolah: That's the thing about the Koran. When I read the Koran, I read it as a beautiful old poetic book that tells us about the past and about religion. The Koran is just as precious to me as the Bible; both of them are among the most wonderful books in the world. That's my opinion, anyway. But when the present president of Iran gets his hands on this book, he reads it completely differently. He misuses it to justify violence.

The Iranian Ayatollahs, the Imams, take a 1400-year-old book and read it as a law book, something they try to use to set policy and govern the country. And that goes terribly wrong! A country becomes a living hell when you try to govern it with the Koran! The outcome is what you can see in Iran today.

Normal people keep the Koran in their living room and use it occasionally as a guideline for their relations with their children and their neighbors, but no more than that. After all, people here still read the Bible, but they don't regard it as law.

In this book you return to the time of the Shah and his overthrow by Khomeini's revolution. Khomeini was originally supported by the political leftists, but then brutally disappointed their expectations.

Abdolah: The Shah was nothing but an American puppet, which may be why Khomeini was able to chase him out of the country so easily. But for a very long time freedom was unknown in Iran. We spent nearly 3000 years in the shadow of a reign of terror. There was no freedom of opinion and no experience with free elections. Anyway, our only choice was between the Shah and Khomeini. We didn't want the Shah, and there was no other alternative. There was only one leader, and that was Khomeini.

After a relatively long liberal phase starting with Khomeini's death, the country is led by a fundamentalist again. Is that a dangerous situation?

Abdolah: Bush wants to bomb, and I think the Ayatollahs want to be bombed. They'd like to go down in history as anti-American heroes. Of course I don't want them to get away with that, which is why I hope that Bush won't bomb Iran. Instead the attempt should be made to talk with them. Otherwise the clergy will have all the Iranians backing them in a struggle against America.

Kader Abdolah was born in Iran in 1952, studied physics in Teheran and fled the country as a political refugee in 1988. Today he lives in Amsterdam, writing under a pseudonym composed of the names of two murdered friends. "Het huis van de moskee" ("The House of the Mosque", not yet translated into English) catapulted Abdolah onto the Dutch bestseller lists.

Islam and Europe
Concertgebouw and More Couscous
Dutch and Moroccans need to show more curiosity, says Abdelkader Benali, Moroccan-born Dutch author. In this essay, Benali discusses the mutual lack of knowledge and its effect on the relationship between the Dutch and the Moroccans

Portrait Mahi Binebine
Portrait of the Artist as a Painter and a Writer
In his latest novel "Welcome to Paradise", Moroccan author and painter Mahi Binebine tells a dark tale of illegal aliens, waiting on the beach of Tanger to set sails for Europe. A portrait by Katrin Schneider

END_OF_DOCUMENT_TOKEN_TO_BE_REPLACED
Social media
and networks
Subscribe to our
newsletter