Interview with Karl-Heinz Ohlig
Muhammad as a Christological Honorific Title

In his book "The Hidden Origins of Islam: New Research into Its Early History," the theologian Karl-Heinz Ohlig has come to the conclusion that Islam was not originally conceived as an independent religion. Alfred Hackensberger has talked with the author 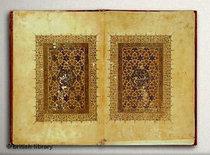 According to Karl-Heinz Ohlig, "the term muhammad was originally a Christological honorific title"

​​Your book bears the title "The Hidden Origins." What is hidden about the origins of Islam?

Karl-Heinz Ohlig: All the information we posses on the origins of Islam is taken from later texts – "biographies" that were written in the 9th and 10th centuries. One of these texts, the Annals of at-Tabari (10th century), is also the source of further histories. As such, we lack any corroborating contemporary texts for the first two centuries.

Can these later documents still be regarded as accurate? From a scholarly point of view, are they not something akin to falsifications?

Ohlig: To categorize these texts, or similarly the books of Moses or the Romulus and Remus tale, as falsifications would be entirely wrong, as one has to take into consideration this specific literary genre. Religious-political foundation myths are not history texts and nor were they meant to be.

You advocate the thesis that Islam was not conceived as an independent religion. What proof do you have for this claim?

Ohlig: According to the evidence of Christian literature under Arab rule from the 7th and 8th centuries, as well as from Arab coinage and inscriptions from this period, such as that on the Dome of the Rock in Jerusalem, the new rulers adhered to a Syrian-Persian form of Christianity that rejected the decisions of the Council of Nicaea. Instead, it regarded Jesus as the messenger, the prophet, the servant of God, but not the physical son of God, who is a strictly unitary being not "adjoined" to any person. The fathers of the Church, for instance, regarded John of Damascus (d. around 750) as a heretic, because his Greek understanding of Christianity did not correspond to their views. There is no mention of a new, independent religion of the Arabs before the 9th century.

Does this mean that Islam was only made into an independent religion at a later date?

Ohlig: This formulation sounds somewhat arbitrary or like a conscious decision. It is much more the case that religions often arise in that a new assessment is made of the inherited religious conceptions of a tradition. These are then interpreted differently, solidified, and systematized in a specific manner.

You have also engaged in historical-critical research with respect to the Prophet Mohammed. What can be said about his person?

Ohlig: It has been established that the earliest coinage with the motto MHMT appeared in eastern Mesopotamia around 660, made their way westward, and there bilingual coins were stamped with MHMT in the center and muhammad in Arabic script at the edge. These coins bear a Christian iconography, i.e. always with crosses, so that the name muhammad is clearly to be understood as a predicate of Jesus, as in the Sanctus of the mass ("praise be to he that comes...").

​​Here, muhammad means "revered" and "praiseworthy" or "He who is revered" and "He who is praised." This also corresponds to the inscribed text on the Dome of the Rock, where the title muhammad refers to the Messiah, Jesus, the Son of Mary, and the servant of God. It also fits in with the polemics of John of Damascus against statements he considered heretical.

Later, it seems as if this Christological predicate lost its reference, so that it appears in the Koran as a frequently mentioned, nameless prophet, which could then be historicized into the form of an Arab prophet. The earliest source of this historicization is to be found in writings of John of Damascus, who speaks of the pseudo-prophet Mamed. Only later could the wealth of stories of this Mohammed fill out the historical deficit.

So what you are saying is that the term muhammad could possibly be referring to Christ?

Ohlig: It is entirely possible – even when previously historically improvable – that an important preacher was present at the beginning or at another point in the history of the Koran movement. However, according to the evidence of Arab coins and the inscription in the Dome of the Rock, it must be assumed that the term muhammad, the revered or the praiseworthy, was originally a Christological honorific title.

Why is it that these links haven't previously been made?

Ohlig: Such inquiries are forbidden in Muslim theology, which hasn't yet passed through its Enlightenment. Western Islamic studies remains preoccupied with philology without employing the established methods of historical scholarship. Similarly, there is little religious-historical or Christian theological investigation into the extremely varied cultural traditions of the Middle East. As such, the roots and motives of these traditions are not recognized.

In your book "Early Islam," you write that you do not wish to harm this religion. Many Muslims will see the exact opposite in your work.

Ohlig: Since the 18th century, many Christians, even to this day, regard the Enlightenment as an attack and an attempt to destroy their religion. In reality, however, it has allowed Christianity to survive in the modern world and also be applicable to the lives of modern man. This is a phase that Islam still has to go through, but it is unavoidable if it doesn't want to exist in the future only in ghetto-like, closed communities.

Karl-Heinz Ohlig is professor of Religious Studies and the History of Christianity at the University of the Saarland, Germany.

Comments for this article: Muhammad as a Christological Honorific Title

The translation from the German is inaccurate. The German original reads: "Deswegen ordnet sie der Kirchenvater Johannes von Damaskus (gestorben um 750) unter die christlichen Häretiker ein, weil sie seinem griechischen Verständnis von Christentum nicht entsprachen.", which is the very different from what the English version says ("The fathers of the Church, for instance, regarded John of Damascus (d. around 750) as a heretic, because his Greek understanding of Christianity did not correspond to their views.") The correct translation would be: "That is why the Church Father John of Damascus (d. around 750) classified them as Christian heretics, because they did not correspond to their Greek understanding of Christianity".

Karl-Heinz Ohlig mentioned that 'muhammad' on the Dome of the Rock came from the Sanctus, but meant, no doubt, that it comes from the Benedictus. It is possible that some anonymous Arab, working from an original Syriac-Aramaic text, translated 'barik' or 'tubwayhun' as 'muhammad'. Nevertheless, 'praise' is normally given to God in liturgy. This is a very appealing solution to the origin of the name 'Muhammad' and may actually be correct. More archeology is needed.

END_OF_DOCUMENT_TOKEN_TO_BE_REPLACED
Social media
and networks
Subscribe to our
newsletter