On a serious note: I have always tried to be clear that my critique was of specific journalists or articles, not an overall critique of Western journalism. I think specifically over the past few years, since the beginning of the Arab uprisings, a new generation of correspondents and journalists has emerged that is doing a great job. They speak the language and they provide more depth. Theyʹre not necessarily always given the opportunity, but standards are improving. Fortunately for me, however, there is still enough cliched Orientalist coverage for me to lampoon. 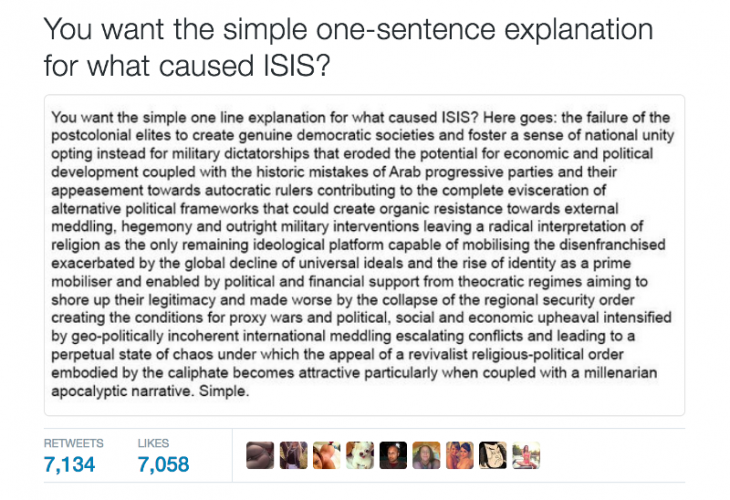 A Twitter turnover to envy Trump: with his alter ego Karl reMarks, Sharro has published more than 90,000 tweets since 2009. In 2016 his video "The Simple One-Sentence Explanation for What Caused Isis" went viral – here, the accompanying tweet

The “Occidentalist” theme of some of your tweets – a sort of reverse mirror image of the Orientalist approach – taps into a rich seam of humour. Were you jesting when you said in your LSE talk that you were tired of Occidentalist humour?

Sharro: I was specifically talking about a particular strand of it which is lazy and complacent. It has become formulaic on Twitter to use this format without any creativity or innovation. For me it remains a rich source of satire: One day I would like to do a travel show about the West, an Occidentalist spoof of the BBC series "Civilisations", if you like, to expand the genre. My friends have already been treated to my ad-libbed versions of the show. Of course, the format itself depends on the writing and the ideas; itʹs not inherently good or bad.

Your Twitter spat with the Lebanese-American author and scholar Nassim Nicholas Taleb is legendary. What explains the spat and your references to "neo-Assyrian trolls"?

Sharro: I think this was the result of our disagreement about his theory that Lebanese people donʹt speak Arabic, but a dialect of Aramaic. I waded into the discussion with less than delicate satire and things escalated between us. A group of his adherents are Assyrian nationalists: they take exception to the fact that as a Syriac I would also identify as an Arab.

For me itʹs not a choice of either/or. The people of the Levant have been mixing for centuries – ethnic identities overlap with linguistic identities and we get more layers of identity as a result. The Neo-Assyrian trolls, as I call them, donʹt believe that, believe instead in a distinct Assyrian identity that has a historic continuity with an ancient Assyrian identity, about which I am highly sceptical.

The events of the past few years – the rise of Islamic State and its oppression of Christians among its many victims, for instance – have inevitably provoked a response, which might explain why this identity project is gaining momentum today, but I donʹt think itʹs the right response to such savagery. My aim is to push people away from identity rather than becoming entrenched; for me that includes stepping back from the politicisation of the Muslim identity, which I think is a counterproductive social development.

Today's in-fighting over the composition of the country's next cabinet is part of a larger battle for a new political settlement. The financial crisis poses a mortal danger to the ... END_OF_DOCUMENT_TOKEN_TO_BE_REPLACED

The upheavals of the past year in the MENA region are arguably as momentous as those of the Arab Spring in 2011. Yet perhaps the biggest difference is that our interest seems to ... END_OF_DOCUMENT_TOKEN_TO_BE_REPLACED

Beirut usually sparkles and dazzles at Christmas time. This year, marked by major protests, however, everything has been turned on its head: there is a distinct lack of Christmas ... END_OF_DOCUMENT_TOKEN_TO_BE_REPLACED

In the heart of Beirut's manicured downtown, something is stirring in a bullet-pocked concrete shell of a building known as "the Egg": the visually unappealing Egg has advanced to ... END_OF_DOCUMENT_TOKEN_TO_BE_REPLACED