Interview with Lebanese director Rabih Mroué
"First, they all have to go. And all means all"

The Lebanese director Rabih Mroué explains why a tax on WhatsApp led to an outbreak of mass protests in his country. And also why the government has until now refrained from using force. Rabih Mroue talked to Till Briegleb

For weeks now, millions of people in Lebanon have been protesting against the government. Rabih Mroué, a prominent Lebanese theatre director and performer, has been exploring the traumas of the Middle East in his work for the past twenty years. His theatrical works combine drama, video, and, most recently, dance in an attempt to reconstruct the historical events surrounding war and violence. Mroue has worked at the Munchner Kammerspiele. His installations and video works have been shown at the Documenta 12 and Centre Pompidou. On the occasion of the premiere of his new piece "You should have seen me dancing waltz" at the Kampnagel Theatre in Hamburg, Mroue analyses the situation in his homeland.

The starting point for the popular protests in Lebanon was the announcement of a tax on the WhatsApp online messaging service. What is behind this?

Rabih Mroué: For years, the people in Lebanon have seen how their country has continued to drift towards the abyss. Everything has disintegrated – politically and economically. Then the government came out with a budget that levelled further hardships on the population: new taxes on fuel and cigarettes, and an increase in VAT. The WhatsApp tax was just the last straw. The Lebanese could never have imagined that government corruption, small-mindedness and irresponsibility would assume such grotesque proportions. This is why people spontaneously took to the streets on 17 October. Suddenly, we were all there. And no one wanted to turn back until the system changed.

What are people demanding?

Mroué: The main slogan is "All means all". Politicians in Lebanon are corrupt and they all have to resign. We then need a transitional government made up of specialists, an immediate end to corruption, the return of all looted funds and early elections. These elections must be free from the confessional quota system that since the civil war has allocated all government posts according to religious sects. Parliament must reflect the views of the citizens. 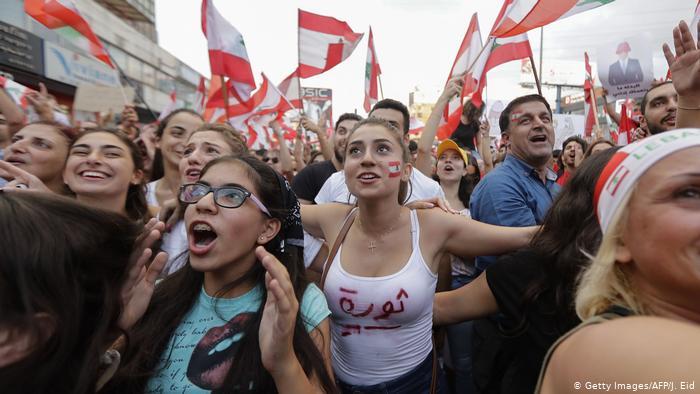 Transcending political, ethnic and sectarian rifts: "we all had the feeling that this was the moment when the Lebanese civil war was finally over. At last, here were all of the religious sects united. There are no political or religious symbols, and no leaders. The only symbol is the Lebanese flag, which stands for everyone," asserts Mroué

Seen via social media, the protest has the appearance of an enormous rave. There are women with megaphones and DJs blast out sound to the crowd. Is there something to this impression?

Mroué: The reaction of 17 October was a surprise for the Lebanese themselves – we were able to do something. Suddenly, hope returned. This is why our great anger is combined with great joy. We all had the feeling that this was the moment when the Lebanese civil war was finally over. At last, here were all of the religious sects united. There are no political or religious symbols, and no leaders. The only symbol is the Lebanese flag, which stands for everyone.

Has the civil war lost its deterrent effect?

Mroué: The young people, those who are mainly carrying out this revolution, know nothing of these wounds anymore. Perhaps what has shocked the political class most of all is that this generation no longer cares about these old rivalries. Instead, they are concerned about their future and can’t envisage it in this state. This allows them to fight together. And whatever the politicians continue to say, they are only mocked. The political class in Lebanon has completely lost whatever trust they may have once enjoyed.

In contrast to the brutal methods employed by the security forces in Iraq against protesters, no violence has been used in Lebanon. Why?

DANCE ON ENSEMBLE / RABIH MROUÉ: "You should have seen me dancing Waltz" from DIEHL+RITTER on Vimeo.

Mroué: Of course, they wanted to violently suppress the revolution. Initially they planned to deploy the security forces, then the Lebanese army. But both institutions refused, primarily for political reasons. The Commander General of the armed forces would like to become president someday. That is why he won’t shoot at citizens who are later supposed to vote for him. But should the revolution grow in size and they all begin to feel personally threatened, then maybe they will employ force after all. The Shia Hezbollah and the Shia Amal movement have already mobilised their thugs to spread fear. But to both their and our surprise, the response was that even more people turned out on the streets. On one day alone, there were two and a half million people. That is more than half the entire population. Violence simply won’t work.

The Hariri government resigned in late October. What happens next?

Mroué: The political class is attempting to stop the revolution by various means. At present – and this is very dangerous – they are trying to make everyday life for the population even more difficult. The politicians claim that there is no more fuel. The banks have closed. Hospitals have declared that they have no more medicines. And, of course, they have placed all the blame on the protesters, although the politicians themselves have brought about this state of affairs. Following the resignation of Saad Hariri, they approached representatives of the protest and offered them cabinet posts in order to split the movement. But the people are quite aware what these games are intended to achieve. The explanation is clear: we have no representatives, and even if we did, they wouldn’t negotiate with you. First, you all have to go. All means all.

Is this a class struggle?

Mroué: It is a revolution against a political caste, which together in alliance with the banks has plundered the country. Yet, even many rich people have joined the demonstration, as we are dealing with the collapse of the entire infrastructure. The upheavals are not only taking place in the capital city, but all over the whole country. The majority Sunni city of Tripoli in the north is the jewel of this revolution, while the Shia dominated south proved to be the greatest surprise. There, the Hezbollah has quite brutally attempted to prevent any other voice but their own from representing the region. Despite this, people the people in the south have been bravely demonstrating. This is encouraging.

Can things turn out better this time than they did during the Arab Spring?

Mroué: I am of the opinion that the Arab Spring is far from over. The revolution will return. This is currently what is going on in Iraq. The government there has killed hundreds of demonstrators and wounded thousands. But the resistance won’t give up. Even in Egypt, things can’t continue like this forever. Although General Sisi throws anyone who speaks freely into jail, this will come back to haunt him.

What role can performers, theatre people and film directors play in this revolution?

Mroué: It awaits to be seen what our role will turn out to be. At this moment in time, we should remain modest. Our voices should blend in with other voices and not stand out.

Your new production with the Dance On Ensemble, which is now being staged at the Kampnagel Theatre in Hamburg, revolves around the connection between violence in the media and the human body. What exactly is it about?

Mroué: "You should have seen me dancing waltz" involves the confrontation of two different media – dance as an abstract medium and current news media. I thereby attempt to raise the question of how far it is possible to push dance into the political realm. Sometimes this results in interaction, other times in complicity. And sometimes nothing happens between text and dance. It is a game of impulse and counter-impulse. There will also be small flashes from Lebanon.

Will the changes in Lebanon influence your work?

Mroué: I have long wished that I could care less about Lebanon. I felt numb. So I recently developed a piece with Lina Majdalanie and Mazen Kerbaj entitled "Borborygmus", which translates as stomach rumbling. It is a very pessimistic work. We called it "a requiem for the living ". Then, on 17 October, the blood returned to my body. And the same thing happened to all Lebanese. I will still show the work, because I like it, but I am no longer happy with its content. This hope has changed me.

Interview conducted by Till Briegleb 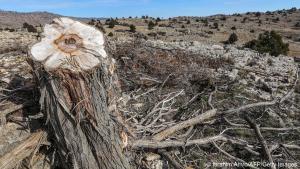 Braving the bitter cold, Lebanese villagers have been patrolling a mountainside in the country's north, trying to protect trees from loggers who roll in under the cover of ... END_OF_DOCUMENT_TOKEN_TO_BE_REPLACED

Food prices doubled, salaries halved, banks restricting withdrawals: Egyptians now have the same problems as the Lebanese. But if things get worse here, the fallout will be far ... END_OF_DOCUMENT_TOKEN_TO_BE_REPLACED

Lebanon was long viewed as the Switzerland of the Middle East. Until relatively recently, billions were deposited in its banks. Gulf states were among the foremost investors in ... END_OF_DOCUMENT_TOKEN_TO_BE_REPLACED

November 2022 sees the Arab world firmly in the spotlight with the COP27 in Egypt and the FIFA World Cup in Qatar. Public trust in MENA governments is weak, thanks to their ... END_OF_DOCUMENT_TOKEN_TO_BE_REPLACED

"You are not my guide... I am the compass. Iranian women have spoken, freed themselves, and unleashed a revolution despite smelling death. They have cut their braids in anger; ... END_OF_DOCUMENT_TOKEN_TO_BE_REPLACED
Author:
Till Briegleb
Date:
Mail:
Send via mail

END_OF_DOCUMENT_TOKEN_TO_BE_REPLACED
Social media
and networks
Subscribe to our
newsletter