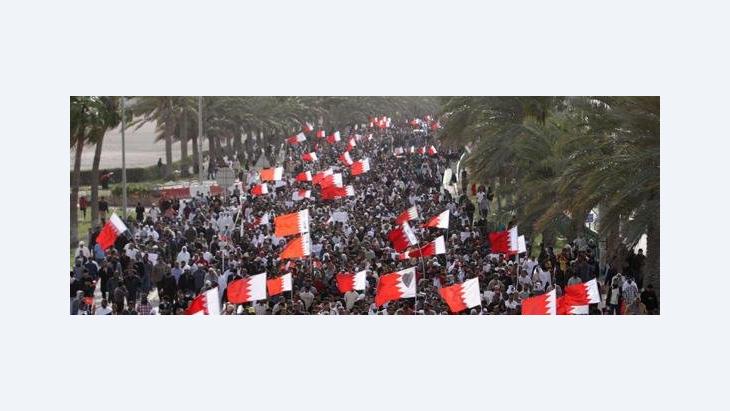 Vying for Supremacy in the Gulf

﻿Relations between Iran and its Arab neighbours have reached an all time low following the military intervention by the Arab Gulf states in Bahrain. But, warns Lebanese political scientist Khattar Abou Diab, it is unlikely that tensions can be contained at the diplomatic level should any further escalation occur. He talks here to Tarek Anegay

The Arab Gulf states were united in their condemnation of "flagrant and unacceptable Iranian interference" in their internal affairs. What sort of consequences might this condemnation have for future relations between the Gulf states and Iran?

Khattar Abou Diab: Following the unrest in Bahrain and the intervention by some of the Gulf states operating within the Gulf Cooperation Council security pact, the Gulf states have begun to take a much tougher line against Iran. The Cooperation Council's Peninsula Shield Force went into the small island state in support of the ruling family and against an opposition which was reputed to be strongly supported by Iran.

This escalation has also been exacerbated by Kuwait's announcement that it had smashed an Iranian spy ring that had been operating in its territory, a move that was followed by a round of diplomatic expulsions on both sides. All of these factors have contributed to an increase in tension in the region. Added to this for good measure were statements made by Iranian President Mahmoud Ahmadinejad, warning Saudi Arabia against continuing their occupation of Bahrain. It all adds up to a level of escalation not seen in the Gulf since the Iran-Iraq War. 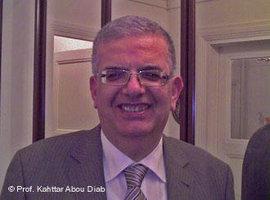 According to Khattar Abou Diab, the Gulf states' intervention in Bahrain is probably the most important historical initiative in the region since independence was gained from Great Britain in the 1970s

​​Do you think that a further escalation is likely in this strategically important region?

Khattar Abou Diab: Iran tried to put a stop to the escalation, which progressed from verbal exchange to expulsion of diplomats, through diplomatic discussions between the foreign ministers. It seems, however, that the Gulf states are afraid of an increase of Iranian influence. In other words, the struggle to win the favour of the Shiite minorities in the Gulf states has begun – with the exception of Bahrain, where there is a Shiite majority. The Gulf states' primary concern is to prevent any shift in their loyalties towards Tehran on the part of these minorities.

I do not believe however that this escalation is in the interests of either side, especially if Iran stops its efforts to "export revolution". Although the policy of exporting revolution is one that has had clear successes in Iraq and Lebanon, it has been a different story in the Gulf region, which is home to the world's largest oil reserves and where many American troops are stationed. All these factors are intertwined and have an influence on one another.

How will relations between Iran and the Arab Gulf states develop? What do you expect to happen in the near future?

Khattar Abou Diab: Up till now, certain Gulf states have tended to provide a kind of link between Iran and the other Gulf states: Kuwait, Qatar and Oman in particular. Oman, however, is currently going through an internal crisis of its own; Qatar, which has recently emerged as a new regional power in the Arab world, has been distancing itself to an ever greater degree from Tehran, while Kuwait's relations with Tehran have slumped to an all time low. All of this means that the overall situation has clearly become more critical.

Do you think that it might come to a breaking off of relations between the Gulf states and Iran? And what effect would such a development have on the region? 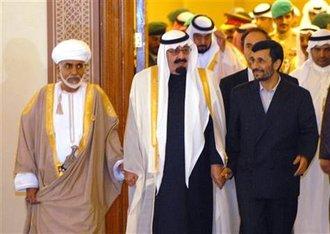 "The struggle to win the favour of the Shiite minorities in the Gulf states has begun." Pictured from left: Oman's Sultan Qaboos, Saudi's King Abdullah and Mahmoud Ahmadinejad

​​Khattar Abou Diab: There is no doubt that domestic policy problems, which are inseparable from the political context of the region, also play a significant role in relations between the Gulf states and Iran. But I believe that neither side wants direct confrontation at the present time. It is much more a case of each side trying to establish limits, drawing the lines, which the other must not cross. Iran is trying to warn the Arab Gulf states that they should not support any US attack on Iran. Iran, in turn, also wants to show that it can apply pressure within the Gulf states themselves.

Could the Gulf states intervene in Bahrain without this resulting in a crisis in relations with Iran?

Khattar Abou Diab: Were there no hostility to the Islamic Republic, the Gulf states would not have resorted to their so-called preventive action for the protection of the ruling family in Bahrain. This is a very significant step to have taken, because the Gulf states made their move without either international or American approval. It is probably the most important historical initiative in the region since independence was gained from Great Britain in the 1970s. I believe that the Arab Gulf states are now more confident of their ability to effectively resist Iranian plans in the region. As you know, relations with Iran reached a crisis point formerly when Iran occupied the islands of the United Arab Emirates.

Thus far, the Gulf states have explored every possible diplomatic avenue in order to avoid any escalation of the situation with Iran. By opting to go into Bahrain and adopting a robust diplomatic stance, the Gulf states are trying to show Iran that there are lines of demarcation that it must not cross.

The entire situation ultimately depends on the behaviour of Tehran and on how Iran's leadership interprets this development. It is unlikely, should further escalation come, that it will be possible to contain tensions at the diplomatic level.

Khattar Abou Diab is a political analyst and adviser and Professor of Political Science at the Sorbonne (Paris III). He is an authority on the Middle East and Islam as well as a regular contributor to the journals "Cahiers de l'Orient" and "Arabies". He was also a contributor to "The Columbia World Dictionary of Islamism", edited by Olivier Roy, Antoine Sfeir, and John King, and editor of its French edition "Dictionnaire Mondial De L'islamisme".

Home
Print
Newsletter
More on this topic
Unrest in Bahrain: ''We are all Bahrainis; Not Sunnis, Not Shiites!''Saudi Arabia and the Protests in the Arab World: A Colossus with Feet of ClaySultan Qaboos bin Said: Omans Renaissance Man
Related Topics
Arab Spring, Arabellion, Democracy and civil society, Human rights
All Topics

Yazz Ahmed is one of the most exciting personalities on the lively London jazz scene. Her complex musical suites combine the traditions of her Bahraini roots and jazz ... END_OF_DOCUMENT_TOKEN_TO_BE_REPLACED

Substantial numbers of schoolchildren in the Gulf are losing their ability to communicate in Arabic. The development may well herald the onset of language loss in the region. By ... END_OF_DOCUMENT_TOKEN_TO_BE_REPLACED

You can’t change regional geography, notes the political analyst Khaled Hroub. Iran and the Arabs will always be neighbours, but we can change and re-shape history and politics. ... END_OF_DOCUMENT_TOKEN_TO_BE_REPLACED

The crisis between Saudi Arabia, UAE, Bahrain and Egypt on the one hand and Qatar on the other appears to be approaching tipping point. The possibility of Doha's departure from ... END_OF_DOCUMENT_TOKEN_TO_BE_REPLACED

A little-noticed subtext to furious protests across the Middle East and North Africa against US President Donald J. Trump's recognition of Jerusalem as the capital of Israel is ... END_OF_DOCUMENT_TOKEN_TO_BE_REPLACED

In the race to buy influence, garner soft power and win over hearts and minds, those involved in the three-month old Gulf crisis are hell-bent on raising the stakes. Commentary by ... END_OF_DOCUMENT_TOKEN_TO_BE_REPLACED
Author:
Tarek Anegay
Date:
Mail:
Send via mail