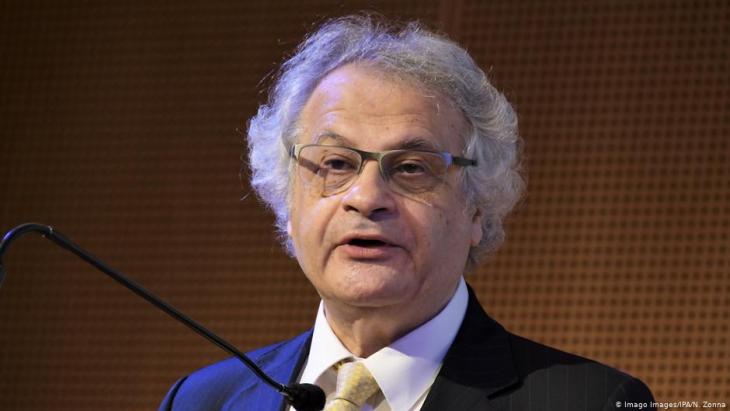 Decades of oil exports have completely destabilised culture and politics in the Middle East. Speaking with Lena Bopp, the renowned writer Amin Maalouf says that the distorted political discourse in the Arab world is now impacting on the West

Mr Maalouf, in your latest essay, you write about the United States under President Trump, Brexit, climate change and conflicts in the Arab world. You consider these different subjects to be pieces of the same puzzle, which you call the sinking of civilisations, the title of your latest book (Le naufrage des civilisations). What is the link between all these things?

Amin Maalouf: For several years, I have wanted to sit down and review and decode certain events. Some of my book is based on personal insight, on my childhood in Lebanon, where I gained first-hand experience of the region's problems. I had the impression that what happened in Arab countries contributed to unhealthy developments in the rest of the world.

In your book, you are far more prosaic and use much stronger imagery. You write: "From my native home, darkness spread out around the world."

Maalouf: As I was writing, I regularly stopped to ask myself whether I was generalising my personal experience. But it does seem to me that there are elements in the current development of the world that have originated in Arab countries.

What are these elements?

Maalouf: Rising populism, for example. People are much more susceptive to danger. Then there is the unease people feel about immigration. There is a clear link between the turbulence in the Arab world and the need to protect oneself – which is in part justified and in part exploited by certain political forces.

What role does oil play in all of this?

Maalouf: In the Arab world, petrodollars gave certain traditional societies influence and took it away from others. Saudi Arabia has gained more influence than any other, while Egypt, which did not have any oil, but played an important intellectual and political role, saw its significance dwindle. The instability that the petrodollars brought to many countries in the region – such as Iraq – had an impact on the rest of the world. What's more, the oil crisis of the 1970s was a decisive factor in the development of a new mentality in the West, which found expression in another economic policy, Thatcherism.

You write of a "suicidal hopelessness" that emerged in the Arab world after its defeat at the hands of Israel in the Six-Day War in 1967. Why did the Arab world never recover from this defeat? You also mention other countries that got back on their feet after major defeats, such as Germany after World War II or South Korea after the Korean War.

Maalouf: Pan-Arabism, which was seen as the most promising ideology during the presidency of Nasser in Egypt and raised expectations and motivated people, was utterly swept away by this defeat. Nasser died shortly after the war; there was nobody to fill his shoes. Instead, the door was opened for a form of nationalism that had a strong religious component. However, the radical Islamism that spread out from the oil-producing states caused tension and divisions within Arab societies. This was clearly illustrated by the Arab Spring.

In many countries, there was a real effort to democratise political institutions and modernise societies. However, the strong Islamist component to protests prevented this effort from really taking shape. In addition, the terrorist attacks perpetrated by several Islamist movements really damaged the image of Arabs in the world, which pushed them into unprecedented isolation. The Arabs are not only in conflict with the West, but also with other major countries that used to count among Nasser's allies, such as India, China and Russia. 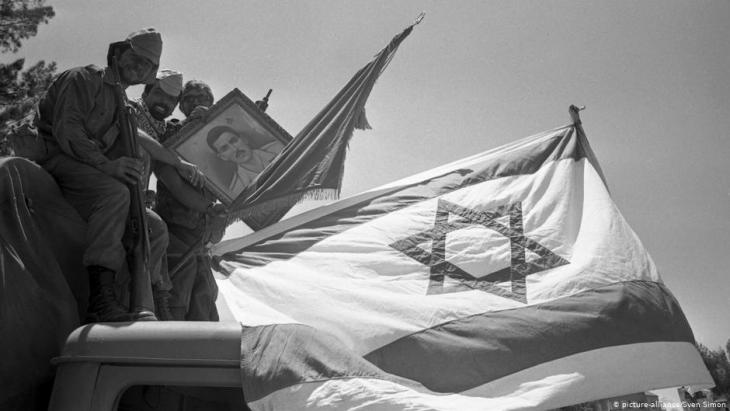 The Six-Day War, a political turning point for the Arab world: "pan-Arabism, which was seen as the most promising ideology during the presidency of Nasser in Egypt and raised expectations and motivated people, was utterly swept away by this defeat. Nasser died shortly after the war; there was nobody to fill his shoes. Instead, the door was opened for a form of nationalism that had a strong religious component," comments Amin Maalouf

You see radicalisation as an attempt by people to outdo each other, one which you even describe as being characteristic of political life in the Arab world.

Maalouf: I think that the political discourse has been distorted; it is not possible to have a reasonable discussion about options. There are certain key words, and as soon as people hear them, they are paralysed with a fear of being marginalised or being seen as a traitor. No one ever asks: in which direction do we want to go? What do we want to create? The discussion is being paralysed by slogans that are enforced with the help of demagogic outbidding and smother rational debate.

Yet in the autobiographically tinted passages of your book, you describe your early years in Lebanon, where you experienced a form of co-existence between the religious denominations that could have served as a model not only for Arab countries, but also the entire world. Are you not attaching a significance to the Levant that it never had and could never have had? And did this co-existence ideal really ever exist? Looking at the Levant as it is today, it seems so unlikely.

Maalouf: There was certainly never any one moment where things went wondrously well. But I grew up in Ras Beirut, not far from the American University of Beirut, in an environment where people from different communities and foreign countries lived. There were many professors and students. There was a certain level of knowledge. And there was a form of co-existence that I have never since found anywhere else. I think that there were exemplary elements.

How could these elements have had an impact elsewhere?

Maalouf: There are so few robust models! If Lebanon had been able to develop a functioning system, it would certainly have helped to pull the region up instead of it being dragged down, as was the case. What's more, this isn't just any old region of the world. It is the cradle of the three monotheistic world religions and it's a kind of showcase. If there had been true co-existence in this region, with its history and its troubles, it would have radiated out to other regions.

You saw how things in Lebanon fell apart. You were there when a bus was attacked in 1975, when Christians attacked Palestinians, the event that is generally considered the start of the civil war. 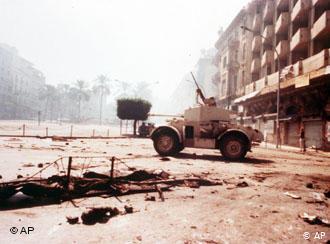 April 1975 marked the beginning of the Lebanese civil war between Muslims and Christian militias. It lasted 15 years and cost the lives of more than 150,000 people. Little remains of the splendour of the country once praised as the "Switzerland of the Middle East ". And Lebanon has not really achieved a lasting peace since. Time and again the country has fallen prey to internal conflicts or external interference

Maalouf: After my wife and I got married, we rented a flat in Ain El-Remmaneh, less than 50 metres from the place where the attack took place. One morning – it was 13 April 1975 – we heard people shouting on the street. Even though I couldn't understand what they were saying, it was clear that they were fighting with each other. Then the shooting started. That probably gave me a more profound impression of what would happen. I very quickly realised that something dreadful was in the offing.

You have lived in France for more than 40 years now. Have you ever considered going back?

Maalouf: There have been one or two moments when it seemed plausible to me, but they quickly passed. When I left, I knew that I would be leaving for a long time. If anyone had said to me when I was young that I would emigrate, I would have thought it impossible.

You have won many literary awards in France and have also been a member of the Académie Française for a few years now. Traditionally, these institutions publicly reject candidates two or three times before finally making them members. Did that happen to you too? Why would anyone put themselves through that?

Maalouf: When I came to France, I started out working as a journalist – just as I had in Lebanon. However, it had always been my dream to write and once I started writing, I knew that I wanted to make it my life. And if you are in France and are a writer then it is only logical that you want to win the Prix Goncourt and become a member of the Académie Française. So that was what I set out to do.

The last time I spoke to a member of the academy – which was about ten years ago – I was told that work on the dictionary was progressing and that they had reached the letter "R" ...

Maalouf: They were still there when I joined. That was 2012. We haven't really made much progress. This morning, for example, we were working on the letter "T". But there are two groups. One has already made good progress and is at "W", so I expect that we will have made it to the end of the alphabet in about three or four years. And then we'll start all over again.

Alaa Abd el-Fattah, arguably Egypt’s most prominent democracy activist, has just been handed another lengthy prison sentence. Despite this, a book of his writing has recently been ... END_OF_DOCUMENT_TOKEN_TO_BE_REPLACED

People in Arab countries have been talking more openly about sex and sexuality for some time now, especially on social media. And for the first time ever, they have the vocabulary ... END_OF_DOCUMENT_TOKEN_TO_BE_REPLACED

A prominent rights group in Egypt, the Arabic Network for Human Rights, is ending operations just as the country braces for a controversial NGO law. Is this the beginning of the ... END_OF_DOCUMENT_TOKEN_TO_BE_REPLACED

Moncef Marzouki was Tunisia's first democratically elected president after the fall of dictator Ben Ali. Today he is the most prominent critic of increasingly counter- ... END_OF_DOCUMENT_TOKEN_TO_BE_REPLACED

Asef Bayat, professor of Sociology at the University of Illinois, Urbana-Champaign, has been studying revolutions and how they affect people since 1979. In his recent book, " ... END_OF_DOCUMENT_TOKEN_TO_BE_REPLACED

Every year in December, the team at Qantara.de takes a look back at the articles that proved most popular with our readers. This year is no different. Here is a run-down of the ... END_OF_DOCUMENT_TOKEN_TO_BE_REPLACED
Author:
Lena Bopp
Date:
Mail:
Send via mail

END_OF_DOCUMENT_TOKEN_TO_BE_REPLACED
Social media
and networks
Subscribe to our
newsletter