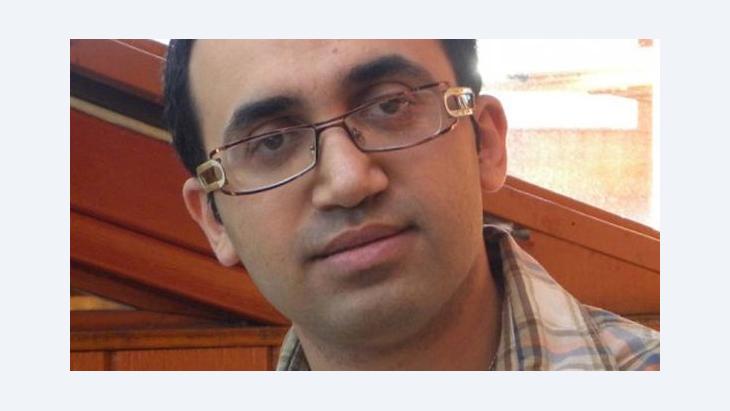 ﻿Arsham Parsi is an Iranian LGBT human rights activist who lives in exile in Canada. In this interview with Ceyda Nurtsch, he speaks about the situation for lesbians, gays, bisexuals and transsexuals (LGBTs) in Iran and his work to support LGBT refugees who flee the country for the West and explains why he is so optimistic about it all

You started your fight for the rights of Iranian LGBTs with a secret chat room more than ten years ago. Today you live in exile in Canada. How has the situation of Iranian LGBTs changed since then?

Still, today, many people speak about Iranian LGBTs. I remember ten years ago when I googled "Iranian gay", there were just three pages. Right now there are more than two million pages. This is a big victory for us.

It is good that what started as a virtual chat room is now real. This year, around September, we would like to make it even bigger: a cultural festival in Toronto. We started from nothing and we have come very far.

﻿…which is due mainly to the fact that you are outside Iran and you speak on behalf of LGBTs inside Iran. How has the situation changed within the country?

Parsi: I remember ten/eleven years ago when I was in Iran, being a gay guy was very, very hard, and families couldn't accept it. Right now I am in contact with lots of parents who know about the sexual orientation of their children. My favourite call came from an Iranian mother: a friend of her son had told her that her son was homosexual. She asked how she should react in order not to offend him. She wanted to understand him. She could have started a big fight and the son could have killed himself. But instead she wanted to educate herself; this is the biggest step. 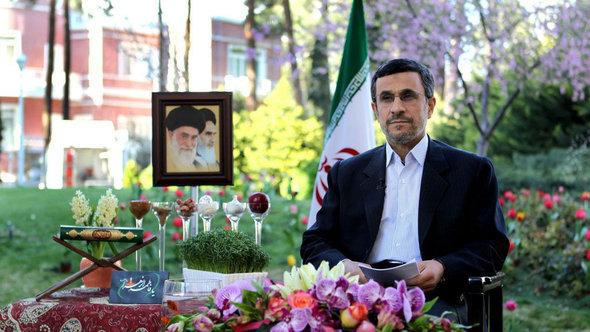 Although Iranian president Mahmoud Ahmadinejad famously stated in 2007 that there are no homosexuals in Iran, Arsham Parsi says that the situation for LGBTs in Iran has not worsened since he was elected: "During the presidency of Khatami or Rafsanjani, the situation was just as bad."

The reason why our non-profit organisation, Iranian Railroad for Queer Refugees (IRQR), is in Toronto right now is that we couldn't register in Tehran. It was my dream to register in Turkey, which would have meant that Iranians could easily come and we could provide support in person. But in Turkey, LGBTs have their own problems and there was basically no room for us. We are an organisation in exile, but our target country is Iran. The refugees we are dealing with are urgent cases. We believe that through our work and the events that we participate in, Iranians will go back home and talk about homosexuality or give gay family members some information.

There is the impression that the situation has gotten even worse under Ahmadinejad whose claim "there are no homosexuals in Iran" made big news in 2007.

Parsi: This what everyone around the world knows about the subject of LGBT in Iran, but the situation before Ahmadinejad was just the same. He was not the first one to deny that there are homosexuals in Iran. During the presidency of Khatami or Rafsanjani, the situation was just as bad. Our organisation started in 2004; it was around the time that Ahmadinejad became president. In fact, since Ahmadinejad has been president, our organisation has begun publishing information. Before, no one talked about this subject.

But the situation is still very difficult. Male homosexuals are still executed if they are caught for the first time. According to the Islamic criminal court, if two guys get caught "French kissing", they are sentenced to 66 lashes. If two same-sex people sleep under the same sheet without clothes – regardless of whether they have sex or not: 99 lashes. Why do they have to go into people's beds and make rules for them? 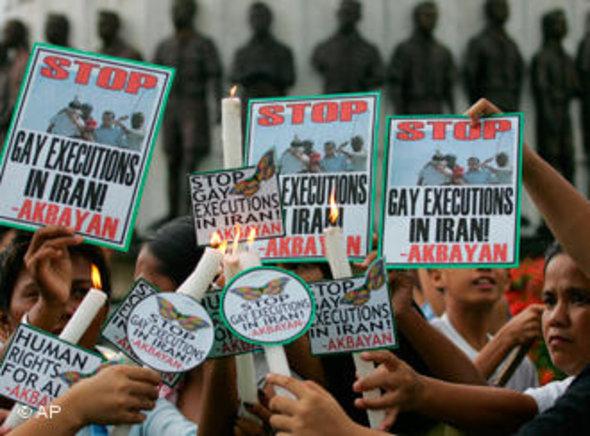 Iranian youngsters Mahmoud Asgari and Ayaz Marhoni were publicly hanged in the city of Mashad in northeast Iran on 19 July 2005, triggering protests around the world (seen here is a demonstration in Manila). The two were officially charged with having raped a 13-year-old boy, but according to international gay rights organisations, the two were executed for having been homosexual

Did the Green Movement change anything for LGBTs?

Parsi: I wasn't sure if the Green Movement could bring any change for homosexuals. I didn't expect them to give us lots of freedom. In all Iranian elections, we have never had the choice between a good guy and a bad guy; we had a choice between a bad guy and a worse guy. Mousavi was better than Ahmadinejad, but he wasn't a good guy.

Twenty-five years ago, when they killed lots of members of the opposition, Mousavi was prime minister; his hands are kind of bloody as well. He, like Karroubi, was a fundamentalist. Both said several times that they believed in Iran's constitution and in Ayatollah Khomeini. The Green Movement was very interesting because the government – and even Mousavi – didn't expect it to happen. They said, "Oh my God, what happened? I cannot go back: I have to go with them."

I think Mousavi was very weak; otherwise he would have stood up. He had the support of millions of people; he could have changed the government. He could have been another Khomeini, but he didn't want to.

The execution of two homosexuals in Mashad in July 2005 was everywhere in the media. Since then, Iran seems to have been a bit more restrained in its execution of gay men.

Parsi: The Iranian government has become more conservative since then – and smarter. They arrest people, they sentence them – for example, to one hundred lashes – but they don't mention that the person is homosexual. They say it is because of drinking alcohol, doing something that is a threat to national security or immoral behaviour. But then again: what is immoral behaviour?

Sometimes they mention lavad, which is male-to-male rape. The Iranian Ministry of Justice makes up incredible stories like: this guy raped that guy when the two were 12 years old. This is why finding exact numbers is very difficult. We don't know exactly how many people have been executed. We cannot find out exactly how many people have been sentenced to death, but the fact is that this law is applied. The number of people is not important. Even if only one person had been executed, we want to know why. 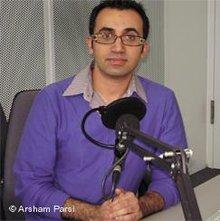 Through his work with and in a variety of LGBT associations and organisations, Arsham Parsi is fighting for greater awareness and for the rights of gays and lesbians in Iran

​​﻿The media has a special effect on Iran, because they are dealing with serious cases there and the government does not want to have more drama. Iran has an image problem because it wants to play the godfather to all Muslim countries. The Iranian government has always been eager to have a good image, especially during Khomeini's time; they wanted to create the image of a democratic government that stands against Western ideas. Khamenei, the supreme leader, always spoke of the enemy.

Homosexuality is something that, in their view, comes from the West and does not, therefore, exist in Iran.

When it comes to the nuclear programme, there are meetings in Vienna, Bagdad and Moscow, where the Iranian government tries to clean up its image. The European governments may not see that for what it is, but we Iranians do.

Parsi: The priority of all governments is, of course, to protect their own interests. This is why the US is engaged in Iraq or in Afghanistan. The problem is that we expected more support from the European governments and the US.

We especially expected more from Europe, because it is geographically closer, because we have more things in common, and because we are culturally much closer. We expected more support, not only for the queer movement, but also for the women's movement and more recently the Green Movement. Hillary Clinton once said: "We wanted to support the Green Movement, but they never asked us."

When it comes to human rights, you shouldn't wait to be asked. I think they have to make it really clear that if the Iranian government doesn't respect the human rights laws that it has signed at the United Nations, they are not allowed to talk to them. I generally think there should be a change within the UN body and in international lobbying.

Do you feel under-represented by international organisations?

Parsi: Ahmed Shahid, who was selected as the UN special reporter on Iran, published two reports on the violation on human rights in Iran. In these reports he mentioned the Green Movement, women and student rights, but he didn't mention anything about homosexuals – and this after we had submitted 100 pages of information to his office in Geneva. I don't know why, but I hope they will be published in a third report. 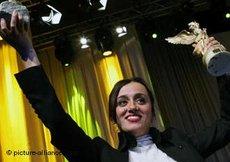 Iranian-born US director Tanaz Eshaghian won the "Teddy Award" at the Berlin International Film Festival in 2008 for her film "Be Like Others" about transsexuals in Iran. Although homosexuality is illegal in the Islamic Republic, gender realignment surgery is permitted

​​Amnesty International also publishes an annual report where homosexuality is mentioned, but only in two paragraphs. There are many organisations that don't consider homosexual rights a priority, but our organisation, IRQR, offers a lot of information.

We receive an average of five refugees every month: there has to be a reason why they flee Iran. This should be documented.

Still, you sound fairly optimistic about the situation of LGBTs in Iran.

Parsi: I am. I am very, very optimistic because I believe in people power. We have an expression in Farsi that you can do whatever you want if you just decide to. I have decided to bring change to Iran and decriminalise homosexuality. It will happen, because homosexual rights, queer rights, are human rights and I'll get my rights back. Rights are never given; we have to fight for them. And I am fighting.

Arsham Parsi is the founder of the Toronto-based Iranian Railroad for Queer Refugees (IRQR) and the clandestine chat room "Celebration of Voice", whose members meet once a year. He also represents Iran in the International Lesbian and Gay Association (ILGA) and the International Lesbian and Gay Cultural Network (ILGCN). He is also a member of the Advisory Committee of the Hirschfeld Eddy Foundation. Parsi has faced death threats and excommunication.

Drawing on the history of Tehran's Shahr-e No red light district, Nasrin Bassiri describes how prostitution functioned in Iran before the Islamic Revolution. The neighbourhood ... END_OF_DOCUMENT_TOKEN_TO_BE_REPLACED

International relations are shifting across the Middle East as regional powers adapt to America's retrenchment and China's growing influence. Although the region could become the ... END_OF_DOCUMENT_TOKEN_TO_BE_REPLACED

Tea is a mainstay of popular culture across the Middle East, from Morocco to Qatar. Tucked away in Tehran's Grand Bazaar is arguably the world's tiniest tea shop. The owner's ... END_OF_DOCUMENT_TOKEN_TO_BE_REPLACED

No other Western poet was arguably so well-versed in the Koran or so fascinated by Islam as Germany's national hero, Goethe. In a new publication that examines all Goethe's ... END_OF_DOCUMENT_TOKEN_TO_BE_REPLACED

A deluge of books, movies, series and cover stories: ever since the events of 9/11, the West has seemed almost manically preoccupied with Islam. Yet this has rarely led to deeper ... END_OF_DOCUMENT_TOKEN_TO_BE_REPLACED
Author:
Ceyda Nurtsch
Date:
Mail:
Send via mail

END_OF_DOCUMENT_TOKEN_TO_BE_REPLACED
Social media
and networks
Subscribe to our
newsletter