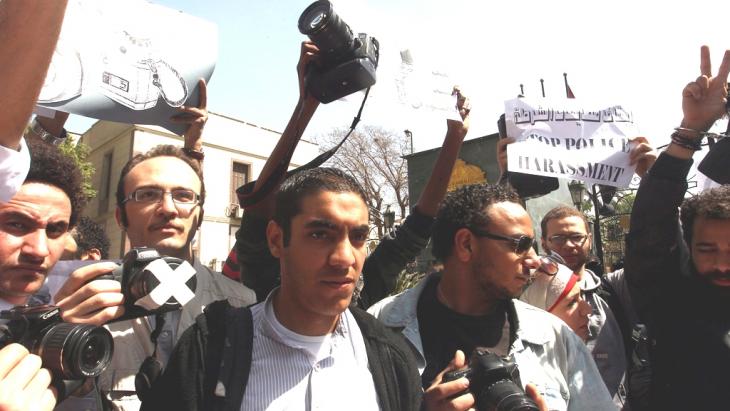 After being dismissed from the newspaper Egypt Independent, editor-in-chief Lina Attalah founded the alternative news website Mada Masr. Egyptian media are in "a very precarious condition", she says – and calls for a new kind of critical journalism. Interview by Jannis Hagmann

Two days before the ouster of President Mohamed Morsi on July 3, the Egyptian newspaper Al-Ahram's headline read, "Morsi: Quit or be forced to quit". Was that a sign of a new freedom of expression in Egypt?

Lina Attalah: No, as a state-run newspaper Al-Ahram has always been controlled by institutions of power. If Al-Ahram had not known from sources within the military and other institutions like the security apparatus that Morsi was going to go, they would never have chosen such a headline. The military has always controlled the media, particularly after the ouster of Hosni Mubarak in 2011.

So Morsi and his Muslim Brotherhood did not succeed in controlling the state-owned media?

Lina Attalah: Exactly. In Egypt, it is the parliament's Shoura Council that appoints the chief editors of state-run newspapers. The Council was predominantly made up of Muslim Brothers and other Islamists. 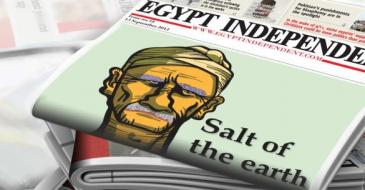 Lina Attalah: "The shutdown of Egypt Independent showed the very precarious condition the Egyptian media are currently in"

They did appoint a number of editors with allegiances to the Muslim Brotherhood. But these were just cosmetic changes that didn't reach the core of these institutions. At Al-Ahram, the new editor-in-chief did not really affect the overall working of the newspaper. Particularly Al-Ahram is a bureaucratic institution.

Do the media's allegiances only result in biased coverage or do newspapers and TV channels actually forge the news?

Lina Attalah: There is a lot of forgery. It targets certain contentious groups like the April 6 Youth Movement. Some media try to tarnish its image because it does not back the military in full force. But the main problem is that not just the state-run media, but also privately-run media have turned themselves into PR machines of the military.

I'll give you an example: We know that on the Sinai Peninsula there are attacks against security and military targets and a military operation against the attackers. But the only information we have about what's actually happening, is the military communiqués. The main local reporter who used to have first hand access to the story has been arrested and is facing a military trial.

You founded the news website Mada Masr. Lately, you reported that six soldiers had been killed by suicide bombers in Sinai. If you don't trust the official communiqués, where do you get information like that from?

Lina Attalah: In this particular case, we got the news from the state-run news agency. But we verified it with a couple of citizen journalists we know on the ground and one local reporter who has – so far – not been arrested. We are one of the few media organizations that went to Sinai during the last month to demystify the image of terrorism in Sinai. 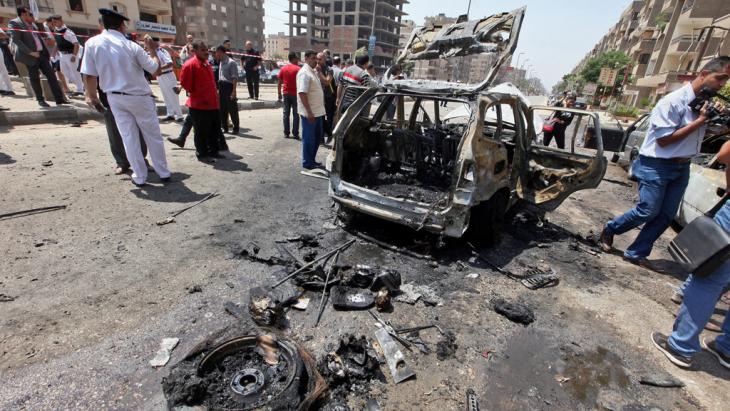 "Terrorism is a narrative that the security apparatus likes to use to stifle critical discourse about social and political rights." - Pictured: Security officials inspect the scene of a bomb blast targeting Egyptian Interior Minister Mohammed Ibrahim near his home in Nasr City, Cairo, on 5 September 2013

We came back with a story that said: Yes, there is a terrorism problem in Sinai, but it is not as big as the military says. I think if Mada Masr attracted more attention, we would have gotten into trouble.

Earlier this month a car bomb hit Cairo. Do you believe in the official account, according to which Islamists tried to kill the Minister of Interior Mohamed Ibrahim?

Lina Attalah: To be honest, I don't know. We tried to verify everything but it was hard. In the last ten years, terrorism in Egypt has been a relatively failed endeavour. During the 1990s, the security state managed to a great extent to uproot terrorism in Egypt. Today, there's an exaggeration about the threat of terrorism in the country. It's a narrative that the security apparatus likes to use to stifle critical discourse about social and political rights.

In June, you lost your job as editor-in-chief of the English language newspaper Egypt Independent. Why was it shut down?

Lina Attalah: For financial reasons. But every financial decision has its political aspects. Egypt Independent was much more progressive in its reporting than the Arabic edition called Al-Masry Al-Youm. Being independent from the interests of the senior editorial team and the businessmen behind Al-Masry Al-Youm made it an easy casualty.

But why would they have an interest in shutting down the more critical English edition?

Lina Attalah: When Al-Masry al-Youm started 2004, it was also very critical and an important part of the contentious politics in Egypt back then. But when the Muslim Brotherhood came to power last year, it contaminated the space of contentious politics. Newspapers like Al-Masry Al-Youm started becoming very anti-Muslim Brotherhood and very supportive of the old regime. But Egypt Independent was not interested in these power dynamics, but only in reporting the truth. These are the political reasons that are not talked about. 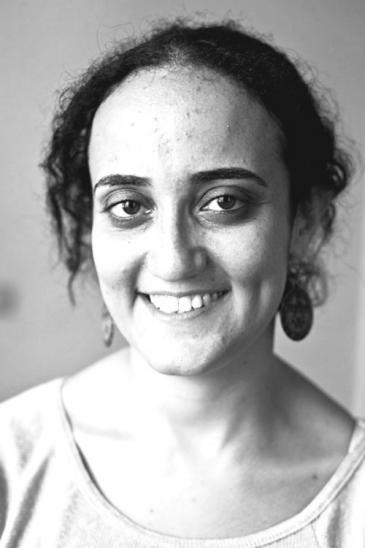 Lina Atallah studied journalism at the American University in Cairo. Before joining Al-Masry Al-Youm, she wrote for Reuters, Cairo Times, the Daily Star, and the Christian Science Monitor, among others

You wrote about it in Egypt Independent's final edition.

Lina Attalah: We wanted to produce a final edition about media in Egypt in general because the shutdown of the newspaper showed the very precarious condition the Egyptian media are currently in. The last edition was about the media acting like PR machines for certain institutions of power.

But Al-Masry Al-Youm was stupid. They hacked our system, saw the content and asked the printing press not to print the paper. We ended up publishing it online only. But as usually, when you censor something, it goes viral. I think the final edition of Egypt Independent was the most read ever.

You then started Mada Masr. How many staff do you have?

Lina Attalah: There are currently twenty-five professionals working for us. They all come from Egypt Independent. We are publishing in English and are now starting an Arabic website, too. One of the liberating thoughts when we stepped out of Egypt Independent was that we could do our own Arabic reporting now. We always felt that what we were writing was not necessarily directed to foreigners.

What is the business model behind Mada Masr and how do you guarantee its independence?

The main idea is to combine traditional aspects of income generating activities like advertisement and paid online content with a less traditional model: If you are an NGO for example, and you have a report to edit, Mada Masr will do it for you. If you are a research organization and want to produce a paper about human trafficking, you can commission Mada Masr to do the research. But the main idea is to create a fund with 50 to 100 investors. It's a shareholding structure, but there will be no anchor investor with a dominating share. That's important.

Alaa Abd el-Fattah, arguably Egypt’s most prominent democracy activist, has just been handed another lengthy prison sentence. Despite this, a book of his writing has recently been ... END_OF_DOCUMENT_TOKEN_TO_BE_REPLACED

People in Arab countries have been talking more openly about sex and sexuality for some time now, especially on social media. And for the first time ever, they have the vocabulary ... END_OF_DOCUMENT_TOKEN_TO_BE_REPLACED

A prominent rights group in Egypt, the Arabic Network for Human Rights, is ending operations just as the country braces for a controversial NGO law. Is this the beginning of the ... END_OF_DOCUMENT_TOKEN_TO_BE_REPLACED

Moncef Marzouki was Tunisia's first democratically elected president after the fall of dictator Ben Ali. Today he is the most prominent critic of increasingly counter- ... END_OF_DOCUMENT_TOKEN_TO_BE_REPLACED

Asef Bayat, professor of Sociology at the University of Illinois, Urbana-Champaign, has been studying revolutions and how they affect people since 1979. In his recent book, " ... END_OF_DOCUMENT_TOKEN_TO_BE_REPLACED

Every year in December, the team at Qantara.de takes a look back at the articles that proved most popular with our readers. This year is no different. Here is a run-down of the ... END_OF_DOCUMENT_TOKEN_TO_BE_REPLACED
Author:
Jannis Hagmann
Date:
Mail:
Send via mail

END_OF_DOCUMENT_TOKEN_TO_BE_REPLACED
Social media
and networks
Subscribe to our
newsletter