Hijacker – The Life of Leila Khaled

The Palestinian-Swedish writer Lina Makboul provides a portrayal of the former Palestinian militant Leila Khaled in her film "Hijacker." The film addresses the distinction between terrorism and the struggle for freedom. By Petra Tabeling 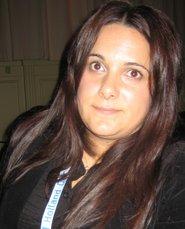 Lina Makboul made a film about Leila Khaled, who hijacked a plane, then underwent six plastic surgery operations on her face just so to be able to hijack the next plane

​​The documentary film "Hijacker – The Life of Leila Khaled" had its premiere at this year's international documentary film festival in Amsterdam. It documents the life of the PFLP activist Leila Khaled, who achieved notoriety with two airplane hijackings in 1969 and 1970. Today, Leila Khaled lives with her husband and two children in the Jordanian capital Amman.

Ms. Makboul, how did you come up with the idea of making a documentary film about Leila Khaled?

Lina Makboul: I am of Palestinian descent. I was born in Sweden and my parents were originally from the West Bank. During my childhood, Leila Khaled was my role model, my idol. My parents told me stories about her. Later, as an adult, I read a book about terrorism, which claimed that she was dead, and so I decided to look into the matter. My relatives informed me that this wasn't true and that she even appears regularly on television. I wanted to know what became of her. Today, Leila Khaled lives with her husband and two children in the Jordanian capital Amman.

How did you succeed in winning over Leila Khaled for your project?

Lina Makboul: I have many friends and relatives in Palestine and, after making a few calls, I managed to get her telephone number. It wasn't very difficult at all. Initially, she was extremely skeptical and also made inquiries about me. After a couple of preliminary talks, she finally agreed to the film project. Actually, she hardly ever speaks with Western journalists, as they always want to portray her as "the terrorist," as a diabolical woman. I think that my Palestinian background was the decisive factor in her decision to talk with me.

How influential is Leila Khaled today? Has the former militant activist given up on the political struggle for a free Palestine?

Lina Makboul: No, not at all. She remains well known, especially in Lebanon. She is a member of the Palestinian National Council, representing the Popular Front for the Liberation of Palestine (PFLP). She is frequently invited to other countries to talk about the Middle East conflict and on the situation of women in the occupied territories. She even criticized Arafat as corrupt and undemocratic on Al-Jazeerah. This was a very courageous move for a woman.

Why did you feel you absolutely had to meet with your one-time "idol"? 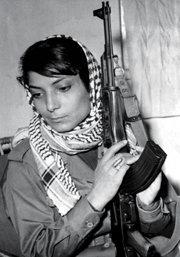 1970s photograph of Leila Khaled. Lina Makboul says she struggled hard to remain unbiased and impartial when shooting this film

​​Just think about it for a moment. Here is a 24-year-old woman, who, armed with a submachine gun and hand grenades, boards an airplane and hijacks it. Then she undergoes six plastic surgery operations on her face just so she will be able to hijack the next plane. I absolutely wanted to meet this woman and ask what motivated her. I have been confronted with the Israeli-Palestinian conflict since my childhood, and every summer I visited my relatives on the West Bank.

The issue of my Palestinian heritage has been a central one for me in Sweden, moving me to reflection time and time again. I have the feeling that Khaled's hijackings, which although did not result in the deaths of any passengers, have cast a bad light on many Palestinian people. At least that is the impression I get when I tell people in Sweden that I am of Palestinian descent. This is quickly equated with concepts such as terrorism. I absolutely had to pose this question to Leila Khaled.

Yet, we don't get an answer to the question of whether or not she damaged the image of Palestinians, because you couldn't bring it upon yourself to ask her. Only at the very end of the film do you ask her your key question, but the viewer doesn't hear the answer.

Lina Makboul: After a very long pause, Leila Khaled simply answered "no." Nothing else. However, I wasn't surprised. The viewers are left to decide for themselves if what she did was right or not.

You didn't only ask Leila Khaled to justify her deeds, which she doesn't regret to this day, but also questioned her former hostages.

Lina Makboul: Yes, I thought it was important to show all opinions on the hijacking events of 35 years ago from a current-day perspective. This is why I didn't only talk to the hijacker, but also to her victims. I was actually quite surprised, though, with the answer given by the American pilot. He said that he could understand her actions. I didn't expect this response, especially not from an American.

Are you aware that your heritage could prompt some to quickly accuse you of making an anti-Israeli film and force you to take a stand?

Lina Makboul: I have worked for eight years as a journalist in Sweden and my experience is that it makes no difference what you write about the Israeli-Palestinian conflict – the accusation is always there. When I made the film, only one thing was clear. I am of Palestinian descent and this is my way of making a film. I think that people's reactions to certain scenes in the documentary will reflect this.

There are such scenes, such as when the Israeli flag is raised during a commentary on Israeli state terrorism...

Lina Makboul: Yes, that was intentional. I think that, historically speaking, the Israeli state with its connection to the paramilitary "Stern gang" has acted in a terrorist manner. I also wanted to show that the losers are defined as terrorists, because the victors always write history.

Do you sympathize with Leila Khaled then?

Lina Makboul: I sympathize neither with the PFLP nor with Leila Khaled. According to international law, one has the right to defend oneself against occupation. From this point of view, they had the right to do what they did. I don't believe that Nelson Mandela was a terrorist, although that is how he was portrayed by the white regime of the time.

Might your film be a source of renewed provocation when it is shown in Israel and in the Palestinian territories?

Lina Makboul: I hope that "Hijacker – The Life of Leila Khaled" will also be shown there. And I am also aware that both sides, Palestinians as well as Israelis, will be provoked. When I showed the film to Palestinian friends in Sweden, many of them didn't like it. They thought that I portrayed Leila Khaled in a bad light.

The film isn't intended, however, to completely agree with any position, neither that of the Palestinians nor the Israelis. And it also isn't intended for that group of people either, but rather for viewers who are not all that well informed on the Israeli-Palestinian conflict. It is meant to arouse reflection.

Interview Hany Abu-Assad
Shooting "Paradise Now" amid Israeli Rockets
The film "Paradise Now" by Hany Abu-Assad, which was shown in competition at this year's Berlin Film Festival, is the first feature film to take on the theme of suicide bombers. Igal Avidan interviewed the Palestinian filmmaker.

END_OF_DOCUMENT_TOKEN_TO_BE_REPLACED
Social media
and networks
Subscribe to our
newsletter