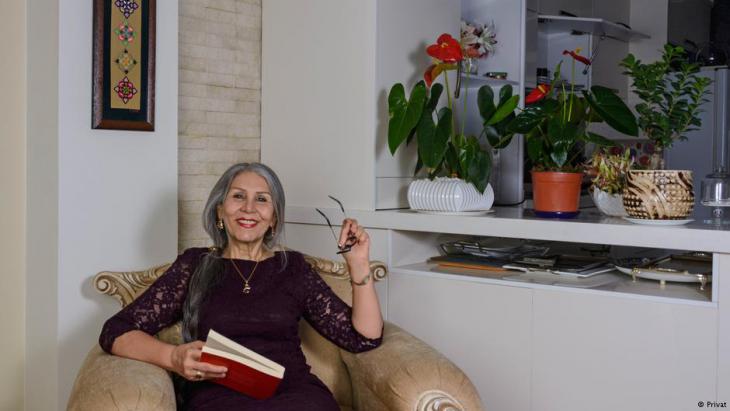 Mahvash Sabet, a leading representative of the Baha'i religion, spent almost ten years in Iranian prisons because of her faith. She was released in September. Sabet turned her experiences during her confinement into poems, which she managed to smuggle out of prison. Interview by Keyvandokht Ghahari

Ms Sabet, can you describe the day of your release for us?

Mahvash Sabet: My family and I were expecting my release on 19 September. On 18 September, however, I was informed that I was being released. The prison staff didn't even allow me to use the telephone. They just brought me to the exit and that was that. I told them I would get someone to film me and would tell the whole world they had just let me out on the street after ten years in prison with no money, no belongings, and that I didn't know anything and wasn't able to do anything. They couldn't have cared less. When I got outside, I was angry rather than happy. Outside the prison gate, some people were gathered, waiting for the release of their relatives. I asked if someone would make a call for me. One of them phoned my husband.

Where did you serve your ten-year sentence?

Sabet: In various places. The first 82 days were spent in the prison at Mashhad. I was then transferred to block 209 of Evin prison in Tehran, where I spent two-and-a-half years in solitary confinement and was interrogated over and over again. Finally I was put on trial, convicted, and sent to Rajai Shahr prison in Karaj. I was there for ten months. Then they closed the women's section and we were sent to Qarchak prison. Two weeks later I was back in Evin to serve out the rest of my sentence.

How did you spend your days during the years in prison?

Sabet: I wasn't really aware of very much during the days I spent in solitary confinement in the security block. It was a hard time, but I was able to escape into my thoughts, my inner world. I had a lot of time to pray. I saw it as a kind of struggle between what was right, that which I carried in my heart, and the misconceptions in the minds of those who were keeping me locked up. My conviction that we had not done anything wrong was unshakeable; during the interrogations in court and elsewhere, I was certain that our innocence would be established. We were accused of many things, but at no point did I take the allegations seriously. I knew it was impossible to make any kind of legitimate case against me. I could not believe that anyone could receive a twenty-year sentence when there was no evidence against them. 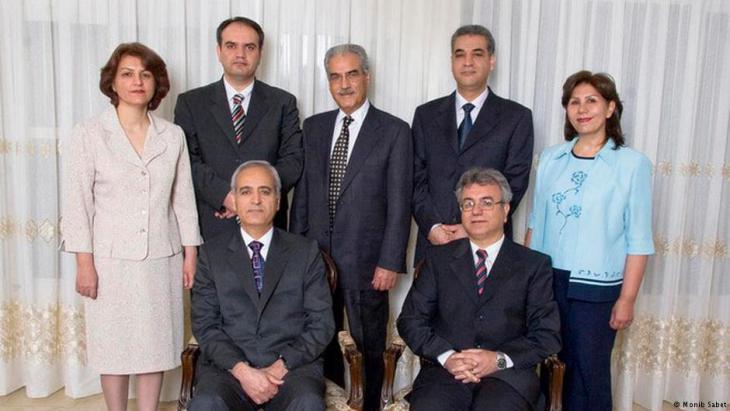 The seven members of the Baha'i leadership imprisoned by the authorities in Iran. On 14 May 2008, Fariba Kamalabadi, Jamaloddin Khanjani, Afif Naeimi, Saeid Rezaie, Behrouz Tavakkoli and Vahid Tizfahm were arrested. Mahvash Sabet had already been remanded in custody several months previously. The five men are still in prison

Were you ill-treated or tortured?

Sabet: I don't want to talk about that at the present time.

You were in a block with other political and social activists. How did you get along with your fellow prisoners?

Sabet: In the wing that housed political and religious prisoners, the prisoners sought a peaceful co-existence. We had created a kind of microcosm of a free country there, where everyone lived according to their faith without fear of discrimination, exclusion or insult. No one gave any heed to whether others were politically active or not.

The Middle East is plagued by electronic armies working at the behest of one regime or another. Long used by those in power as a weapon in the fight against activists and ... END_OF_DOCUMENT_TOKEN_TO_BE_REPLACED

On Friday, Iranians head to the polls to elect a new president. What's at stake in this presidential election? Sanam Shantyaei explains. END_OF_DOCUMENT_TOKEN_TO_BE_REPLACED

For centuries, the great classical Persian author Hafez has inspired German writers. Translations, adaptions and homages have been created in his wake, and the process continues ... END_OF_DOCUMENT_TOKEN_TO_BE_REPLACED

In the run up to Iran’s presidential election, Supreme Leader Ayatollah Ali Khamenei has sought to entrench his power. Alex Vatanka asks whether a sharp slump in voter turnout ... END_OF_DOCUMENT_TOKEN_TO_BE_REPLACED

Turkey's parliamentary and presidential elections are scheduled for June 2023. But they are already casting a shadow. While the opposition is calling for early elections, ... END_OF_DOCUMENT_TOKEN_TO_BE_REPLACED
Author:
Keyvandokht Ghahari
Date:
Mail:
Send via mail

END_OF_DOCUMENT_TOKEN_TO_BE_REPLACED
Social media
and networks
Subscribe to our
newsletter