Were you, as a Baha'i, treated any differently to the other prisoners?

Sabet: Some things happened in Rajai Shahr prison that showed that the authorities were trying to terrorise us psychologically, or to get the other prisoners to gang up on us. But the prisoners didn't go along with it. On one occasion, I was put into the block for serious offenders, along with Fariba Kamalabadi, who was also arrested for belonging to the Baha'i faith. The situation there was especially difficult as no one was permitted to talk to us or even acknowledge our presence. I even heard – though I can't confirm whether it is true or not – that one of the inmates awaiting execution had been ordered to kill us. Apparently she was told that she would be hanged anyway, but that killing us would allow her to die with honour.

Things soon changed for the better, however, because we had done nothing wrong and we supported the other inmates, empathised with them or gave them advice. We had very similar experiences in Evin prison too: it is the custom for the inmates there to choose a spokeswoman, the so-called "block lawyer". Her job is to deal with internal matters and establish lines of communication with the prison staff. The first time a Baha'i woman was elected block lawyer, the prison authorities refused to play along. All the inmates in the block went to see the deputy governor of the prison and were able to persuade him that we would not accept the conditions outside being transferred inside the prison, because inside, everyone is equal. The authorities accepted our point of view. It opened the door for other Baha'i women in the block to be elected later. 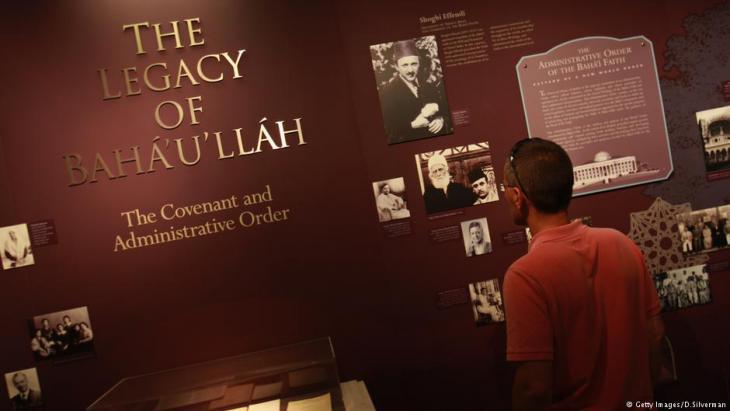 According to the website of the worldwide Baha'i community, Baha'is believe that the crucial need facing humanity is to find a unifying vision of the future of society and of the nature and purpose of life. Pictured here: a visitor to an exhibition in Haifa about the founder of the Baha'i religion, Baha'u'llah

The Irish writer Michael Longley described your poems as "epic poems that want to soar". Do you agree? And what are your poems about?

Sabet: My poems are love poems. Despite the fact that they were written under very difficult circumstances in prison, they are about love: the love I tried to help grow in my heart for people all over the world, for my surroundings and for those who may not necessarily have been kind to me. I wanted to hold on to my memories forever – the memories of imprisonment, from the perspective of a woman. There may be many people who would like to know how a 21st-century woman managed to survive for ten years in such a tiny corner of the world? To know what she thought about every day, how she coped with problems in prison and about her moments of happiness?

I wrote about love, about pain and suffering, and about my inner struggle. I never once though of weapons or overthrow. Nor did I ever try to deviate anyone from their path, but rather to find strength in my spiritual and mental strength. If these are the characteristics of epic poetry, then yes, my poetry is epic.

That my poems should want to soar after all this seems normal to me. When one has been behind bars for years, one yearns to fly, to break free of the chains for ever. I longed to leave the narrowness, the pessimism and the misunderstandings behind me, to make people see that I had done nothing wrong, that I was a human being just like them and that I had been accused of the most dreadful things because of my most honourable actions.

How has your life been since your release?

Sabet: It has been difficult to adjust to life on the outside; emotionally I am still very much attached to the friends I had in prison. I got used to time passing slowly there. Out here it passes so quickly. I have the feeling that I'm getting virtually nothing done. That is something I find very difficult.

After my release, I didn't even recognise the bank notes, never mind the streets of Tehran. And then there were the many visitors, the children, who had grown up in the meantime, or the babies that I was meeting for the first time. Many people passed away while I was in prison. It is like living in a strange, foreign world.

The USA and NATO plan to withdraw from Afghanistan by September. The operation is risky, the outcome uncertain. Many Afghans fear civil war. The quake on the Hindu Kush will also ... END_OF_DOCUMENT_TOKEN_TO_BE_REPLACED

The Prophet Muhammad never executed anyone for apostasy, nor encouraged his followers to do so. Nor is criminalising sacrilege based on Islam’s main sacred text, the Koran. In ... END_OF_DOCUMENT_TOKEN_TO_BE_REPLACED

Surging coronavirus cases in many parts of the world have overshadowed the start of this year's Muslim holy month of Ramadan, with festivities once again curtailed by contagion ... END_OF_DOCUMENT_TOKEN_TO_BE_REPLACED

German Middle East analyst Guido Steinberg and television journalist Ulrich Tilgner have both published new books on the conflicts in the Middle East. Their analyses and their ... END_OF_DOCUMENT_TOKEN_TO_BE_REPLACED

On 27 March, Iran and China signed a 25-year accord intended to foster "strategic co-operation". Despite ongoing uncertainty over the deal's actual scope, content and chances of ... END_OF_DOCUMENT_TOKEN_TO_BE_REPLACED

Researchers agree that climate change alone cannot be blamed for the outbreak of war in Syria in 2011. However, neither can it be ignored as a reason this once blossoming country ... END_OF_DOCUMENT_TOKEN_TO_BE_REPLACED
Author:
Keyvandokht Ghahari
Date:
Mail:
Send via mail

END_OF_DOCUMENT_TOKEN_TO_BE_REPLACED
Social media
and networks
Subscribe to our
newsletter