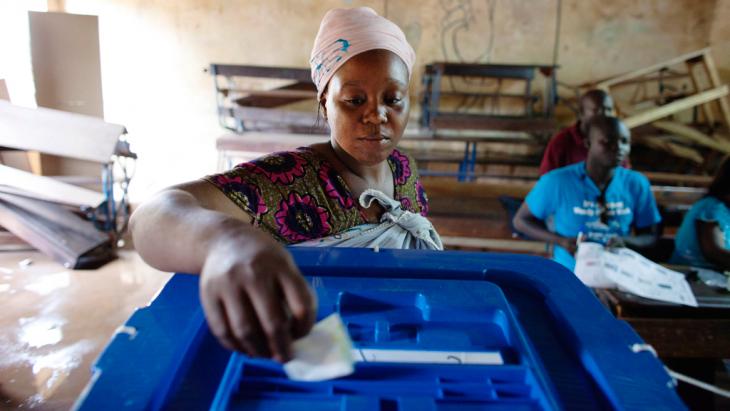 According to West Africa expert Marie Rodet, although the conflict in Mali has not yet been fully resolved, the situation there has improved, and there are other countries in the region that are a greater cause for concern. Jonas Berninger spoke to her about the reasons for the French intervention and Mali's future

Early in 2012, a Tuareg organisation known as the MNLA (National Movement for the Liberation of Azawad) and various terrorist groups launched an offensive against the Malian army in the north of the country. Because of his alleged inability to put an end to this attack, President Amadou Touré was ousted by the military under the command of Captain Amadou Sanogo. Less than a year later, the United Nations sent French and African troops to stop the rebels' advance. The second round of the presidential elections was held on 11 August. Ibrahim Boubacar Keita, a former prime minister, will be the next head of state in Mali.

Although the two rounds of the Malian presidential election have passed without major incidents, the country's future remains uncertain. How would you assess the current situation in Mali?

Marie Rodet: Many people are pinning their hopes on the next president, which, of course, puts a lot of pressure on him. It remains to be seen whether he will be able to live up to all these hopes and expectations, especially while there is still the ongoing issue in the North, which is far from being solved. The relations with the Tuareg insurgents in Kidal in the north of the country, who have already said that they will ask for autonomy, are tense. They have used this transitional situation between the two rounds of the election to put pressure on the next president so that he responds to their claims for autonomy.

Additionally, there is a huge economic and social crisis; thousands and thousands of Malian refugees are still living in neighbouring countries under very difficult conditions. One of the next major problems that the new government will face will be to reorganise their repatriation and ensure that these people can live in safety and security. 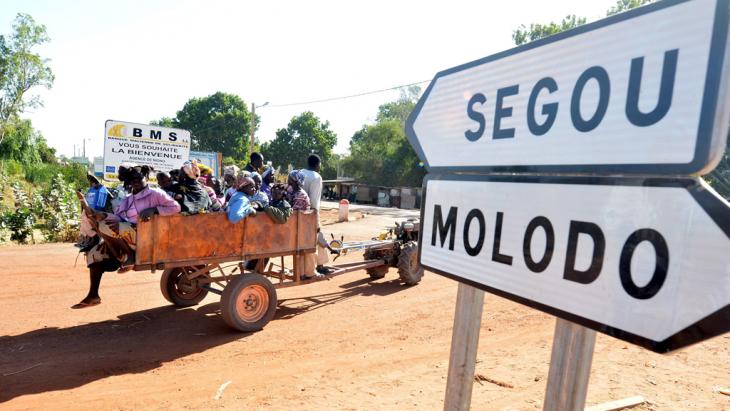 Refugees arriving at an army checkpoint near Niono, central Mali: according to UNHCR, 200,000 Malian refugees are currently living in neighbouring countries, while another 204,000 people are internally displaced. This is causing a range of economic, social and humanitarian problems.

Ibrahim Boubacar Keita, also known as "IBK", has won the elections. How will he deal with the situation in the north of Mali?

Rodet: IBK is known for being quite tough in negotiations with the Tuareg. We suspect that he might be more reluctant than Soumaila Cissé to deal calmly with the Tuareg "independentalists", i.e. the insurgents fighting for independence. However, the future president does not have much room to manoeuvre; he will be under a lot of pressure from international donors, from the US, France and the African Union.

Some people have claimed that France's military intervention in January was not only about driving back the Tuareg and organisations like Ansar Dine in the North but also about securing uranium deposits in Niger, for example. What, in your opinion, were the reasons for the French military deployment?

Rodet: It is hard to be sure. France was ready to intervene at some point. In January this year, the situation escalated very quickly and this prompted an immediate intervention. The Islamists reached villages that are very close to important strategic points in Mali. The problem was that nobody was ready or willing to intervene. As far as I know, it really was the various politicians of West Africa who called President Hollande and said to him "You have to do something now, because it is getting worse and worse".

There was obviously a sort of modus vivendi between the leaders of the coup in Bamako – Captain Sanogo and his troops – and between the Islamists in the North. Sanogo let them advance as long as they did not reach Bamako. When France intervened, Sanogo was apparently planning another coup against Dioncounda Traoré, so in the end, he was the last one to call Hollande for help. The French just stopped the progression of the Islamists towards the South before it was too late. 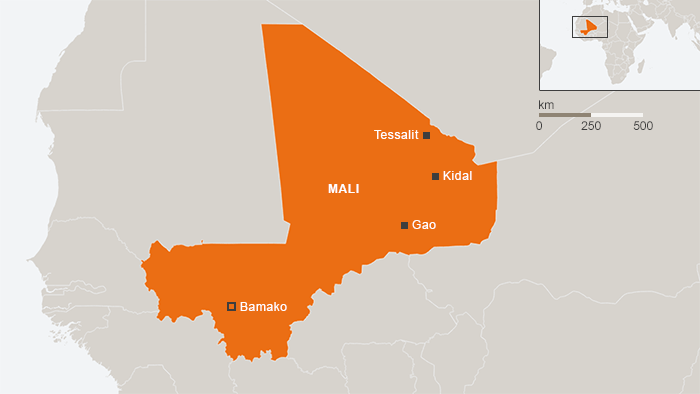 Kidal in eastern Mali is the stronghold of the insurgents. From there, the militant groups MNLA, Ansar Dine and the "Movement for Oneness and Jihad in West Africa" (an offshoot of al-Qaeda in the Islamic Maghreb) launched an attack on the South in January 2012. Having been driven out of the region a year later by African and French troops, they are now most likely to be hiding in Southern Libya and Niger.

There are still several thousand French soldiers in the country. What do you think France is going to do next?

Rodet: The French say that they will leave Mali gradually. But I believe that they will stay in the background as part of the MINUSMA troops (the United Nations Multidimensional Integrated Stabilization Mission in Mali – ed.), even if they are not officially at the forefront. They will stay since they are better equipped than the others; they have already intervened and from now on, they will have a strong presence in northern Mali. They are going to keep an eye on the North because there are concerns about the French hostages but also about the situation, which is currently volatile and could escalate at any time.

The Islamists have been defeated, but not all of them have been killed or have disappeared: they are hiding somewhere, either in northern Niger, southern Tunisia, or – what is much more likely – in the south of Libya, which is completely out of control at the moment.

You have mentioned a number of countries. In what respect has this conflict influenced the surrounding countries and how do you think they are going to react in the future?

Rodet: Well, it is hard to say because these Islamist groups disappear, reappear and adapt very quickly. They are extremely flexible. However, what is certain is that the whole situation is pushing neighbouring countries towards greater militarisation. Niger, for example, is asking for international support to reinforce its army. That is what is actually happening in Mali at the moment with all this training for the Malian army offered by the European Union and the Americans. This is very important because these armies were very weak and need both training and equipment.

But the big question is what will happen next in Libya. It was the main reason for the destabilisation of Mali, but it is still not under control, especially in the South. No real state control exists there; instead, there is a lot of trafficking, and armed groups control the region. Libya is a new time bomb.

At the same time, we do not know what is going to happen either in Tunisia or in Egypt in terms of political change; the whole region is potentially explosive. There are lots of reasons to be deeply concerned, but I believe that the situation in Mali has been made quite secure; the conflict is not completely solved, but compared to what could happen next in other countries, such as Libya, the stakes are rather low in Mali. That is not to say that what is going on in Mali is not important, but I believe that there is much more to be concerned about in other countries. 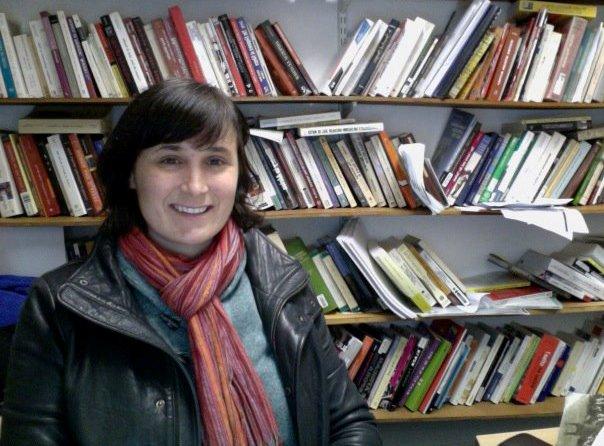 "There are lots of reasons to be deeply concerned, but I believe for Mali the situation has been made quite secure," says Marie Rodet, adding that "there is much more to be concerned about in other countries" e.g. Libya and Tunisia.

That is an interesting assessment. But surely the Tuareg are going to continue to challenge Malian state authority and to try to establish a state of their own.

Rodet: I think it only depends on how much pressure big international players like the US and France put on the Malian government to accept or to reject plans for independence and autonomy. Of course, all regions in Mali have been deprived – a lot of Malians feel disenfranchised – but if the Tuareg become autonomous, all regions in Mali will be in a position to claim autonomy in the same way. The new president will probably push the process of decentralisation, which has already been well advanced in the past 20 years. The next government will have to examine how far the autonomy of the northern region can be rearticulated within the broader decentralisation process.

Do the Tuareg leaders' demands really reflect those of the majority of their fellow people?

Rodet: The Tuaregs – even if they do have some legitimate claims to some extent – only represent a very, very tiny portion of the population of Mali and even the MNLA, which is currently the leading Tuareg rebel group, does not reflect what the majority of the Tuareg really think and wish. Considering what happened recently, I believe that people just want peace at the moment. And I am not sure that the MNLA would be able to maintain a steady position on full autonomy at a time when people just want peace.

Marie Rodet is a lecturer in the history department of SOAS, University of London. She specialises in slavery and gender issues in francophone West Africa, especially Mali.

Home
Print
Newsletter
More on this topic
Consequences of the Military Intervention in Mali: A Tinderbox SituationInterview with Ahmed Rashid on Mali: ''Worse than Afghanistan''Ansar Dine's religious leader Chérif Ousmane Haidara: ''This is not Sharia, but banditry''
Related Topics
Islam in Africa, Islamism | Political Islam, Jihadism | Jihadists
All Topics

The book "The Invention of the Maghreb: between Africa and the Middle East" prompts us to review basic terminology. This includes terms that we use almost every day as if they are ... END_OF_DOCUMENT_TOKEN_TO_BE_REPLACED

Asmaa al-Atawna's debut novel "Missing Picture" has been published in German translation (Keine Luft zum Atmen – Mein Weg in die Freiheit). In it, she describes life in Gaza from ... END_OF_DOCUMENT_TOKEN_TO_BE_REPLACED

Lebanon was long viewed as the Switzerland of the Middle East. Until relatively recently, billions were deposited in its banks. Gulf states were among the foremost investors in ... END_OF_DOCUMENT_TOKEN_TO_BE_REPLACED

To celebrate the bicentenary of the deciphering of the Rosetta Stone, the British Museum is running an exhibition entitled "Hieroglyphs: unlocking ancient Egypt" until February ... END_OF_DOCUMENT_TOKEN_TO_BE_REPLACED

Since Russia invaded Ukraine, Europe has been trying to find alternatives to Russian gas, inevitably zeroing in on the Arab Gulf states. In his commentary, Yemeni politician ... END_OF_DOCUMENT_TOKEN_TO_BE_REPLACED

Nouara may be 65, but she is ready to join thousands of others who burn their ID and pay traffickers for the chance of a new life in Europe. Zineb Bettayeb reports END_OF_DOCUMENT_TOKEN_TO_BE_REPLACED
Author:
Jonas Berninger
Date:
Mail:
Send via mail

END_OF_DOCUMENT_TOKEN_TO_BE_REPLACED
Social media
and networks
Subscribe to our
newsletter