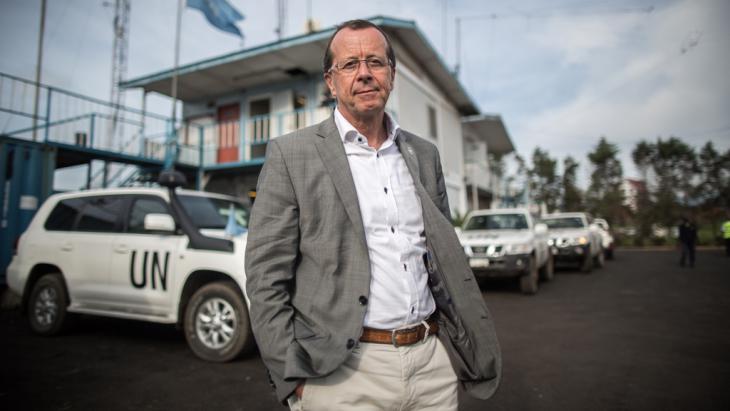 "Libya must not become the Syria of tomorrow"

In view of the advance of IS in Libya, the UN's Special Representative on Libya, Martin Kobler, warns of the need for swift action: the Libyan state must reinstate its monopoly on the use of force to enable it to take appropriate counter measures. Karim El-Gawhary spoke to the German diplomat

Mr Kobler, how would you describe the situation in Libya in one sentence?

Martin Kobler: The situation is chaotic, in some places anarchic, the "Islamic State" is expanding even further. And there's a security and political vacuum that must be overcome.

There is currently a list for a unity government, but once again the political process appears to be  faltering...

Kobler: There is a good chance that the government could come into being. It's vital that such a government is based in Libya and that it doesn't become a government in exile. This is of course dependent on many factors, in particular the security situation in Tripoli. It is essential to agree on a security treaty that temporarily guarantees the security committee of the Presidential Council. The committee is currently conducting negotiations with the militias, which we are intensively involved in. The expansion of "Islamic State" in Libya is top of the agenda. Another key issue is the humanitarian situation, which is absolutely disastrous. This government must deliver results; after all, people expect political leaders to do something to improve their living situation.

Those sceptical of the Libyan peace process fear that in the end, instead of dealing with two governments – as is the case today – we may soon be dealing with three. Do you share this fear?

Two main power bases currently exist in Libya, which are in turn made up of smaller interwoven centres of power. Why should these multiple actors be willing today to cede their power to a new unity government?

Kobler: The longest journey begins with a single step. It is the power bases, large and small, that perpetuate the chaos within the country. And yet, the real power of those claiming to represent a main power base, such as in Tripoli for example, doesn't reach very far. One key factor are the city representatives who were elected; a second are the clans in the east of Libya. We're paying particularly close attention to these groups and encouraging them to support the government. No one is interested in a weak government. In view of the expansion of Islamic State and the humanitarian situation, the nation needs robust government. 1.4 million people are still dependent on food aid and 2.4 million are reliant on other humanitarian aid. 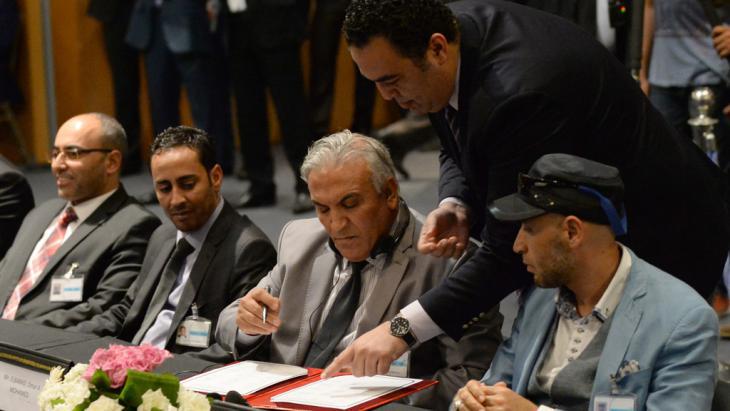 The steep road to peace: in December 2015, representatives of the two rival leaderships in Libya signed a UN-negotiated treaty seeking a way out of the crisis. But there is dissatisfaction with the agreement, particularly among the chairmen of both parliaments and other deputies. Nevertheless at the signing ceremony in Skhirat, the UN's Libya negotiator Martin Kobler spoke of an "historic day for Libya"

Why is a "humanitarian ceasefire" so important for the eastern Libyan city of Benghazi in particular?

Kobler: Parts of Benghazi have been reduced to rubble. Fighting there continues unabated. Tuition can no longer take place in around two thirds of the city's schools. Children have already lost an academic year. Foreign workers have now left the country, while hospitals are closed or can only provide a bare minimum of treatment. The situation there is a complete disaster – hence the focus on a humanitarian ceasefire.

There is much talk in the media about how far "Islamic State" could spread in Libya. There has even been speculation that the IS leadership could move from Syria and Iraq to Libya, if the military situation should become too difficult there for the jihadists.

Kobler: We're following this development very closely. Between January 2015 and January 2016, IS greatly increased its presence in Libya. The jihadists are currently trying to gain control of the oil terminals at Ras Lanuf. Of course it would be catastrophic, if the little oil that Libya still produces were to fall into the hands of IS. We're observing clear IS expansion to the east. But there have also been terror attacks in the west in recent weeks. Of greatest concern is the jihadist expansion to the south, one that is advancing by the day. The strategic goal is probably a co-operation with extremist groups such as Boko Haram and terror groups in Chad and Niger. The Libyans must prevent this from happening. 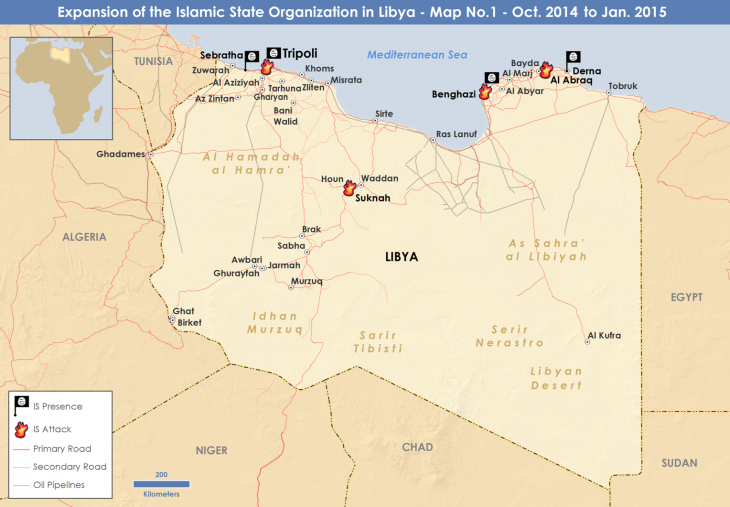 Five years after the first protests against the dictator Muammar al-Gaddafi, who was later toppled and killed, Libya is a "failed state". It is a nation where everything comes in twos: two governments – in the east of the country in Tobruk and in the west, in Tripoli. Two parliaments, two oil ministries. And as they lock horns, the third sees its advantage: "Islamic State" jihadists are exploiting the political vacuum in this North African nation and seizing more territory

Kobler: In principle, there is no shortage of weapons in the country. Statistically, there are three weapons to every Libyan. But at the point when a government is formed, a security structure must be created to fight IS effectively. Yet this is something the Libyans must do themselves; they must equip themselves in the battle against IS. And to do this, the new Libyan army will of course need modern weapons. I understand the demands for the lifting of the weapons embargo, but the application must come from a government that has the required legitimacy and that doesn't just represent a part of the country.

It's important to pursue the fight against IS. While the Libyans get embroiled in numerous disputes, most recently with the new government, IS is profiting from these conflicts. The jihadists aren't haggling over commas in treaties – they just take land, occupy oil fields and launch attempts to occupy the oil terminals in Ras Lanuf and on the Sirte Gulf in a bid to control the oil trade. Here, the fragmentation of the political landscape in Libya is encountering the military unity of IS. The political process must therefore succeed more quickly than it to date and must not be overtaken by the military process.

If there is too much pressure from outside the country, there are fears that the political process initiated by the unity government could fail. Does the government not need more time to establish something solid and sustainable in Libya?

Kobler: It will fail if nothing happens and if IS is able to expand unchecked into a political and military vacuum. That's why there is no alternative to the Libyans reaching agreement amongst themselves. Foreigners cannot do that for them. We can support them in this process and talk to them, but the political will must come from them. They must also aim for a consensus in which everyone fights IS together – and in this respect, the future doesn't look so black to me. 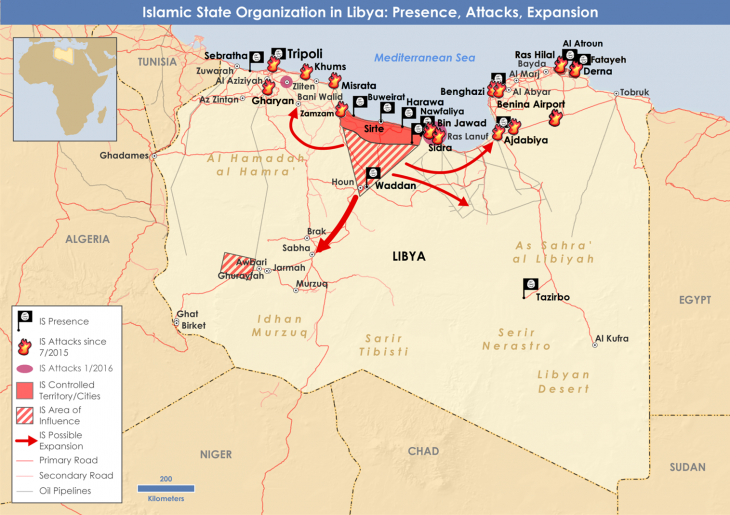 The jihadist advance: after setbacks in the formation of a government of national unity for Libya, UN special envoy Martin Kobler warns against an expansion of the "Islamic State" jihadist militia in the North African country. A lack of unity among national actors would promote the military expansion of the Islamists, says Kobler. He says the IS militia is already advancing to the south, which is especially dangerous for neighbouring countries Niger and Chad

When you worked as a UN negotiator in the Congo, you commanded 20,000 peacekeepers. Was your mission there comparatively easier to organise? What lessons from Congo have you been able to apply to Libya?

Kobler: In Congo there are also state-free zones where the government has absolutely no power and the rebels control particular areas. But IS is much more organised and dangerous than the many rebel groups that exist in Congo. But the principle is the same: the state needs to restore its monopoly on the use of force. This is however much more difficult in Libya. There are no international peacekeeping troops deployed there. That would also be absurd and would not bring any kind of solution. It is much more a case of the Libyans being put in the position to conduct this fight against the jihadists themselves.

Kobler: Let′s not put the cart before the horse. First and foremost a government is needed that pools its own forces and organises its security structure as well as the fight against IS itself. And if this government later decides that it needs foreign assistance, why not? Essentially this is about containing IS. Libya is just a few nautical miles from Malta. There is of course a justifiable European interest in not allowing IS to come over. And European interests that Libya won't become the Syria of tomorrow are equally strong.

The German diplomat and UN negotiator Martin Kobler (62) was ambassador to Egypt and Iraq. In December, he marked his first major success in efforts to secure a solution to the conflict in Libya, when elements of the conflicting parties signed an agreement to form a Libyan national unity government in the Moroccan resort of Skhirat. He spoke of an "historic day for Libya", but conceded that the agreement was only the "start of a long road for Libya".

Unauthorised immigration to Europe went down at the peak of the pandemic. As EU countries re-open, migrant flows are back up. What does it mean for the EU – and for migrants? By ... END_OF_DOCUMENT_TOKEN_TO_BE_REPLACED

The children of Libya's brutal and erratic former dictator Muammar Gaddafi are becoming more popular as the country's elections, scheduled for 24 December, approach. Some fear ... END_OF_DOCUMENT_TOKEN_TO_BE_REPLACED

Two refugees detained in Egypt are facing deportation to Eritrea. The expulsion of the Eritreans, who have been incarcerated in Cairo for more than eight years, has been halted ... END_OF_DOCUMENT_TOKEN_TO_BE_REPLACED

Germany's foreign policy is explicitly values-based. But what happens, Ralf Bosen asks, when democracy, the rule of law and human rights collide with the logic of trade and ... END_OF_DOCUMENT_TOKEN_TO_BE_REPLACED

A new survey by Arab Barometer adds numbers to the narrative that COVID has led to a harsher reality for women in the Middle East and North Africa. By Jennifer Holleis and Razan ... END_OF_DOCUMENT_TOKEN_TO_BE_REPLACED

The Libya Conference will be held in Berlin on 23 June. Much has been achieved since the last Libya Conference in Berlin in January 2020. The ceasefire is holding, there is a ... END_OF_DOCUMENT_TOKEN_TO_BE_REPLACED
Author:
Karim El-Gawhary
Date:
Mail:
Send via mail

END_OF_DOCUMENT_TOKEN_TO_BE_REPLACED
Social media
and networks
Subscribe to our
newsletter