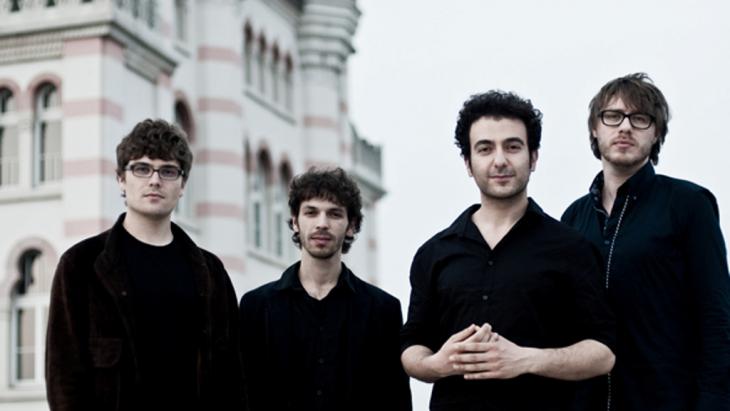 Masaa's blend of free-spirited instrumental quartet and outstanding male voice makes their sound arguably the most accomplished fusion of Jazz and Arab tonal colouring currently to be found in Germany. On their third album ″Outspoken″ the four musicians demonstrate their mature mastery of their craft. Stefan Franzen talked to singer Rabih Lahoud

Rabih Lahoud, your third album is titled "Outspoken". That might suggest that things were not so explicitly articulated on the earlier albums...

Rabih Lahoud: The title "Outspoken" expresses the fact that we have moved on, evolved as musicians and that goes for me as singer and lyricist too. It was something I became aware of in retrospect: after recording was over I had a look at the earlier work, thinking about my voice and the synergies within the group. The immediate impression I had was that everything was somehow clearer this time, like a mirror that has been cleaned. The title also refers to the fact that our various languages give us the opportunity to express the things that are important to us with all of means at our disposal.

Your song texts are sometimes only three lines long. Would you describe them as emotional states, visions or aphorisms expressed in words?

Lahoud: I've always been impressed by Japanese haiku poems. For me they represent a respite, a breathing space. My life has always been about stress, about running from one place to another, or one person or another. I've always yearned to be able to hold on to a word or a feeling and give them the time they need. It's a wish not to have to run anymore, or say so much, but rather to find out how much we can draw from a single word. 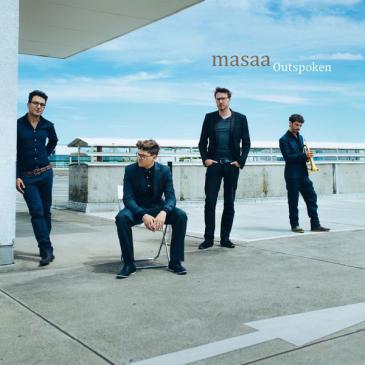 Languages of emotion: ″each language in which I have formed friendships becomes a mother tongue for me. The relationships that have arisen in that language lead me through talking and word choice to an emotional source. It is important to realise that while our own culture is a way of communicating, we as human beings also have the ability to open ourselves to other things,” say Lahoud

Do you have any role models for your compositions, from Arabic poetry for example?

Lahoud: Not intentionally. I know the material of course and when I was younger I used to read a great deal and listen to a lot of music, but influences are unconscious. Khalil Gibran is an important writer for me; I like his way of expressing profound thoughts, so unlike anyone else.

Do you see Arabic as your mother tongue, or does the fact that German has been your everyday language for so long mean that there is a certain distance there?

Lahoud: I have never felt that I belong to a single country or culture. The feeling of belonging to a particular place or past is something I have always found difficult to understand. I've always wanted to explore lots of different directions and ways of thinking, to get to know many different kinds of people. It expresses itself now in the various languages I sing in.

Each language in which I have formed friendships becomes a mother tongue for me. The relationships that have arisen in that language lead me through talking and word choice to an emotional source. I don't think of myself as an Arabic-speaking person. That is really a matter of fortuity.

In any case my main language was French, so that was just as much part of me growing up. I really believe it is important to realise that while our own culture is a way of communicating, we as human beings also have the ability to open ourselves to other things.

When a text is forming in your head, do you already know the language it will be written in?

Lahoud: I sense a musical or melodic atmosphere that leads me to a language. With the French track "Ta Voix", for example, Markus, our trumpet player came up with an idea and I immediately felt that it had to be done in French. The German track was the one I was most cautious about; I asked myself whether I could do it at all. The words came first and perhaps I was more of a poet in this instance. I learned the German language from books and took exams. So, for me, it is associated with deeper thinking at an intuitive-intellectual level.

The French element in your repertoire is very important. What does the chanson tradition mean to you?

Lahoud: Jacques Brel is definitely an influence. In my student days I used to sing his songs, privately and give small concerts. The same goes for Piaf. There is something in the nature of the French voice that really moves me. I feel I sound different when I sing in French. Chanson has influenced me since childhood. These two personalities, Arab and French, have grown up together in me. Integration does not change them, quite the opposite in fact, their distinctiveness is reinforced. The feeling for chanson I had as a child is still there to be called up.

Masaa has also toured in Lebanon. How was your music received there?

Lahoud: We played the universities in Lebanon and came into contact with lots of young people. I had the feeling that they regarded our music as rather European. It was what I had expected because our music doesn't fit in with the culture there. But as people began to listen to the lyrics, they became rather emotional. This is something my first homeland is in need of, a new language that can be developed musically in new ways. They have been living there for such a long time in cultural stagnation. You could sense the longing for new directions in language and in music.

Germany’s electorate includes some 7.4 million citizens with international roots, while many more millions of residents from abroad aren’t allowed to vote. Both groups are often ... END_OF_DOCUMENT_TOKEN_TO_BE_REPLACED

No other Western poet was arguably so well-versed in the Koran or so fascinated by Islam as Germany's national hero, Goethe. In a new publication that examines all Goethe's ... END_OF_DOCUMENT_TOKEN_TO_BE_REPLACED

Migrants are often maligned as being responsible for Europe's problems. Yet their integration is in Europe's interest. Michael Thaidigsmann believes that a long-term vision is ... END_OF_DOCUMENT_TOKEN_TO_BE_REPLACED

How could the Afghan government and its institutions collapse so quickly? That things were going wrong in Afghanistan had been obvious for a long time, yet the West preferred to ... END_OF_DOCUMENT_TOKEN_TO_BE_REPLACED

Shida Bazyar's new novel is the literary surprise of the year. It tackles the pressing issues of our time, and yet it is timeless. This is a story of friendship, marginalisation ... END_OF_DOCUMENT_TOKEN_TO_BE_REPLACED

The swift fall of Kabul recalls the ignominious fall of Saigon in 1975. Beyond the local consequences – widespread reprisals, harsh repression of women and girls, and massive ... END_OF_DOCUMENT_TOKEN_TO_BE_REPLACED
Author:
Stefan Franzen
Date:
Mail:
Send via mail

END_OF_DOCUMENT_TOKEN_TO_BE_REPLACED
Social media
and networks
Subscribe to our
newsletter