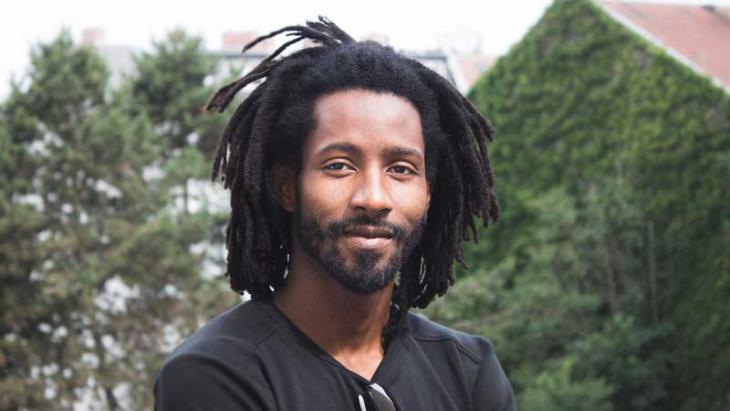 Interview with Mauritanian artist Saleh Lo
"If I can restore some of their dignity, my work will have been a success"

Self-taught artist Saleh Lo grew up in the Mauritanian capital Nouakchott, playing with children from different ethnic communities, among them "Haratin" kids – the children of modern-day slaves in Mauritania. Today, the visual artist portrays freed slaves and anti-slavery activists. Interview by Siri Gogelmann and Wolfgang Kuhnle

Mr Lo, on 30 July, the United Nations brought the problem of trafficking in persons to the attention of the world. To what extent is human trafficking an issue in Mauritania?

Saleh Lo: To me, the definition of human trafficking by the United Nations includes slavery-related practices which still exist in Mauritania. Modern-day slaves in Mauritania are called "Haratin", a word whose origin is unclear but it probably comes from the Berber word for dark or black – referring to their skin colour – or the Arab term for "second class people". The slavery-related practices are rooted in ancestral master-slave relationships and manifest themselves today in work without pay as cattle herders, for instance, or as household help for mostly "White Moorish" or "beidani" ("white") master families. Somewhat less well known is the fact that traditional cast systems and slavery also persist within the black Mauritanian communities of peul, soninke and wolof. Although slavery was officially abolished by the Mauritanian government in 1981 and has been illegal since 2007, conditions similar to slavery still exist. The perpetrators are hardly ever persecuted. Since they have had little or no education, "Haratin" that have been freed – not to mention their dependants – often struggle to make a living. They suffer from both racial discrimination and the dire economic situation in Mauritania.

In your artistic work you have portrayed some freed slaves. How did you meet them?

Lo: I have worked closely with freed slaves and activists since 2014. At the beginning of my research, I got in touch with the radical Mauritanian anti-slavery organisation IRA – the "Initiative for the resurgence of the abolitionist movement" – and accompanied their demonstrations in Mauritania's capital Nouakchott. I met around ten activists who put me in touch with more than 25 freed slaves. Those former slaves allowed me to visit and interview them and to take portrait photos of them in their homes. Afterwards, I used those images to paint their portraits. The look in their eyes shows both their sadness and their pride in being free at last.

Officially abolished, unofficially still rife: on paper, the era of slavery in Mauritania ended nearly forty years ago, yet modern-day slaves – Haratin – continue to be part of the countryʹs social fabric. Rooted in ancestral master-slave relationships, todayʹs slavery-related practices generally manifest themselves as manual agricultural labour or menial household work, for mostly "White Moorish" or "beidani" ("white") families – with no rights or remuneration

How do the people you portray react to your work?


Lo: In 2016, I exhibited my series "Libre ou esclave", which means "Free or Slave", at the French Cultural Institute of Nouakchott. For this work I portrayed eight freed slaves and several IRA activists during demonstrations. I invited all the former slaves I portrayed as well as 150 activists I met during my research to the exhibition opening. It was a very emotional moment for them and also for me. They were proud that their story was finally being told to a wider audience in Mauritania. It was the first time they had attended an art exhibition. For me, painting those people means valuing them. It helps to restore their dignity. I also wanted to show both them and the people attending the exhibition that political activism can be expressed through art and dialogue. Protest does not have to be violent to be successful.

The Prophet Muhammad never executed anyone for apostasy, nor encouraged his followers to do so. Nor is criminalising sacrilege based on Islam’s main sacred text, the Koran. In ... END_OF_DOCUMENT_TOKEN_TO_BE_REPLACED

For people in the Arab world to be able to throw off the yoke of military rule, a new balance must be struck between political and social forces and the military. Though it is now ... END_OF_DOCUMENT_TOKEN_TO_BE_REPLACED

Mauritania straddles the transition between the Maghreb and sub-Saharan Africa, its population equally divided between Africans and Arabs. ... END_OF_DOCUMENT_TOKEN_TO_BE_REPLACED

END_OF_DOCUMENT_TOKEN_TO_BE_REPLACED
Social media
and networks
Subscribe to our
newsletter