The Muslims and Jews of Tétouan

M'Hammad Bennaboud is a historian who knows the Medina of Tétouan in Morocco inside out. He is also familiar with the great changes the city has undergone over the past hundred years. Nathalie Galesne spoke to him about the long history of Jewish–Muslim co-existence in the city

When did the Jewish presence in Morocco begin?

M'Hammad Bennaboud: The start of the Jewish presence in Morocco varies depending on the city or region in question. In some areas it dates back thousands of years; in others, it dates back a few centuries. The Jews of Tétouan, for example, arrived with the Andalusian Arabs when they rebuilt the Medina in the late fifteenth and early sixteenth centuries. They helped spread Andalusian culture in the territory. They have preserved Andalusian traditions and documents in Tétouan over the centuries.

The Medina has been called "the white dove", but also "the little Jerusalem". The Jewish cemetery of Tétouan is located in front of the Muslim cemetery. There has been great continuity in the Jewish presence in Morocco down through the ages. Jews settled in cities such as Tétouan, Fez, Tangier, Chauen, Asilah, Rabat, Marrakesh, Essaouira and also in rural areas such as Rif.

Did the Jews abandon Morocco en masse at a certain time, as they did in Algeria after the country gained independence?

Bennaboud: The Jews began to leave Morocco in the 1960s. They moved elsewhere, looking for better opportunities in France, Spain, Canada, Venezuela, etc. or settling in Israel. After all, Zionist propaganda was very strong from the 1960s onwards. 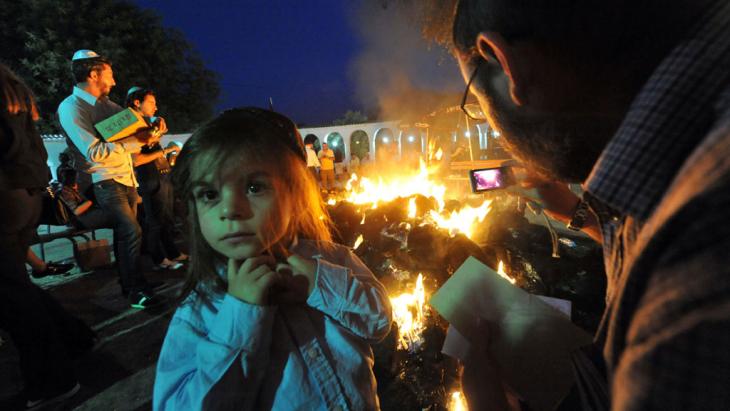 According to M'Hammad Bennaboud, Jews of Moroccan origin come to Tétouan from Israel every year to visit the tomb of a saint. Here, Jewish people gather around a bonfire during a Jewish pilgrimage to the tomb of Rabbi Amram ben Diwan in Asjen, Morocco

Morocco is considered one of the few Arab countries to recognise the importance of Jewish culture to its identity. What does this mean in practice?

Bennaboud: There are Moroccan Muslims and Moroccan Jews. The citizens of these two faiths are both considered Moroccans, and also they consider themselves Moroccans in all respects. They have a long history of living together.

At difficult times in our history, the sultans of Morocco protected the Jews – as in the case of King Mohammad V during the Vichy government, when Morocco was a French protectorate. Hassan II and his son, the current king, have not changed their position towards the Jews.

The rights of Jews to practice their religion and to an education are enshrined in the Moroccan constitution. The Jews have their own schools, synagogues, etc., and many Jews who moved to Israel have kept their Moroccan traditions – music, cuisine and customs – alive there too.

Moreover, the Jews of Morocco are loyal to the king. Some have held important positions such as André Azoulay, economic advisor to King Hassan II and Mohammed VI. Others have held ministerial posts. Most Jews in Morocco speak the Moroccan Arabic dialect.

Do you have personal memories of the time when the Jewish and Muslim communities in the city co-existed?

Bennaboud: Yes, I had two uncles who were great traders. They had major Jewish business partners whom they often received in their office and invited to eat at their homes. My cousins studied at the Israeli Alliance of Tétouan. Some major stores in the city such as those where you could buy jewellery, fashion or quality shoes belonged to Jews. Jewish women have also produced traditional clothes and been friends with Muslim women. The Jews were present in all economic and social activities and lived in the biggest Jewish quarter of Morocco. 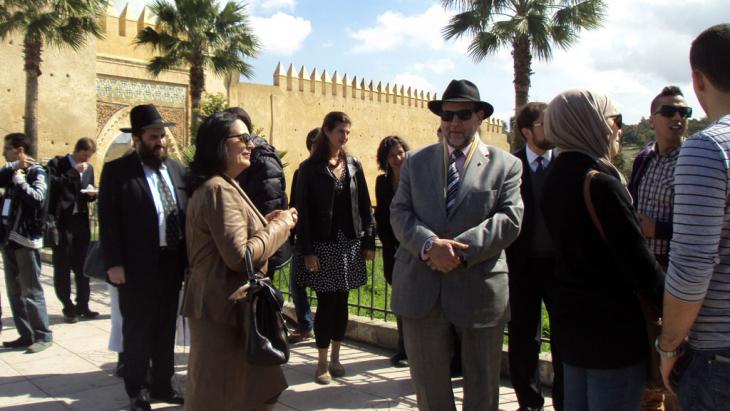 Morocco has a long history of peaceful co-existance between Jews and Muslims. According to M'Hammad Bennaboud, at difficult times in the country's history, the sultans of Morocco protected the members of its Jewish community. Pictured here: Muslims and Jews in front of the Bab Elmellah Gate in Fez

What about the Jewish community of Tétouan today? It is much diminished, like that of Tangier?

Bennaboud: The community of Tétouan is more diminished than that of Tangier. Now there are only about a dozen Jews in the city. The representative of the Jewish community of Tétouan, Mr. Momo Hayoune, has far less spiritual and social influence than representatives of this community used to have. In the past, some rabbis enjoyed great social prestige, not only within the Jewish community, but also among the Spaniards and the Muslims.

To which countries did the Jewish community of Tétouan and Morocco move?

Bennaboud:  Many Jews from Tétouan moved to Madrid and other cities in Europe, Canada and Latin America. Today, many of them visit Tétouan with great nostalgia. There are also Jews of Moroccan origin who come from Israel every year to visit the tomb of a saint, which is located in the Jewish cemetery of Tétouan.

Rabbi Bengualid, for example, is highly respected, and his home-synagogue in Mellah is a museum run by the Moroccan Jewish community. Some Jews from Cetua also visit Tetuan. After all, the two cities are only 40 kilometres apart. I think that the Jews of Tétouan are very like their Muslim compatriots. Many Muslims have also migrated from the city, which radically transformed the social structure of our city after independence. 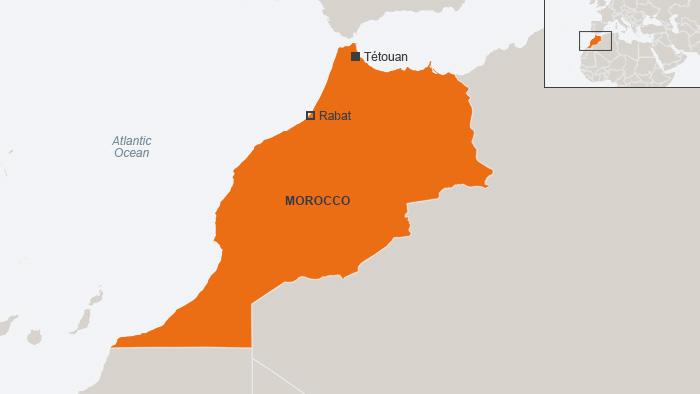 Tétouan, which is situated on the Mediterranean close to the Straits of Gibraltar, has always had close links to Spain. It was also occupied by the Spanish army in 1860 and was the capital of the Spanish protectorate in northern Morocco and the Sahara from 1912 to 1956

Bennaboud: Tangier was a cosmopolitan city because of its international status. It is unique in Morocco. Tétouan has always had close links to Spain, not only because of its origins and its links with Andalusia, but also because of its occupation by the Spanish army in 1860 and its role as the capital of the Spanish protectorate in northern Morocco and the Sahara from 1912 to 1956.

The Spanish community was very important. Located 40 km from Ceuta, Tétouan is still home to a Spanish consulate, three Spanish schools, the Instituto Cervantes, a Spanish hospital, a wide commercial network with Ceuta, Spanish companies and several Spanish television channels and radio stations. The Spanish people of Ceuta often visit our city and our region. In the city, Spanish is spoken in the street; the locals have a great passion for Spanish football, especially Barca and Real Madrid. The difference between Tétouan and Tangier is that unlike Tangier, there are more Spaniards in Tétouan than any other European nationality.

Do you yearn for the days when Jews and Muslims lived here side by side?

Bennaboud: We cannot go back; the past is the past. It was a lovely era, but now we are in another period. However, it must be said that the change in Tétouan is not limited to the relationship between Muslims and Jews. The city has changed dramatically at all levels: social, cultural, economic and artistic. Now it is cosmopolitan thanks to its strategic location, but in a different way. We must therefore look to the future.

Home
Print
Newsletter
More on this topic
Interreligious Dialogue in Morocco: Peaceful Co-existence between Divine ReligionsIbn Rushd and Maimonides in ''Out of Córdoba'': The Muslim-Jewish Heritage of Islamic SpainThe Writer Edmond Amran El Maleh: A Moroccan Jew with Arabo-Berber RootsInterview with Simon Levi: "A Culture is Never Lost"
Related Topics
Dialogue of Cultures | Intercultural Dialogue, Jews in the Islamic world, Minorities in the Muslim world, Places of Dialogue
All Topics

As someone accustomed to presenting his country to interested outsiders, Israeli teacher and tour guide Noam Yatsiv makes the case for a more nuanced appreciation of the ... END_OF_DOCUMENT_TOKEN_TO_BE_REPLACED

Jewish voices are much more diverse than the public often sees. Jewish men and women who oppose the injustice of Israeli occupation in the West Bank deserve our respect and ... END_OF_DOCUMENT_TOKEN_TO_BE_REPLACED

The Germans have a fragmented perception of the conflict between Israel and the Palestinians, and their discourse is dominated by certain catchphrases. All the while, there is a ... END_OF_DOCUMENT_TOKEN_TO_BE_REPLACED

An unusual organisation brings Jews and Muslims together to fight hate and promote dialogue. In the small central German city of Marburg they have been jointly calling for an end ... END_OF_DOCUMENT_TOKEN_TO_BE_REPLACED

Professor Timothy Brennan's "Places of Mind: A Life of Edward Said" is a detailed biography of one of the most important intellectuals of the twentieth century, taking us on a ... END_OF_DOCUMENT_TOKEN_TO_BE_REPLACED

Yair Lapid, like his late father, is a journalist-turned-politician renowned for his staunchly secular positions. But as the centrist politician edges towards the Israeli ... END_OF_DOCUMENT_TOKEN_TO_BE_REPLACED

Comments for this article: The Muslims and Jews of Tétouan

We all need a good case of amnesia. Jesus said, "Go forth and multiply"; which I interpret to mean, "Don't marry your cousins, however attractive they are; but get out of town to find a mate; it's better." Racial, ethnic, religious, or any kind of purity is a destructive delusion, creating a genetic vacuum; and we all know how Nature feels about vacuums!

“But,” I said, “isn’t it a fact that the average Jew is a labourer working for about a penny an hour?”

“Ah, that’s only for show! They’re all money-lenders really. They’re cunning, the Jews.”

My guess is the Jews left after the 1967 war. I started watching the coming of age movie "A Summer in La Goulette" which was set in Tunisia and recalled a time when three girls, a Muslim, a Christian and a Jew, could all be friends looking for romance in a seaside town. It was a bit too programmatic for me, but it was an artifact of its time.

END_OF_DOCUMENT_TOKEN_TO_BE_REPLACED
Social media
and networks
Subscribe to our
newsletter