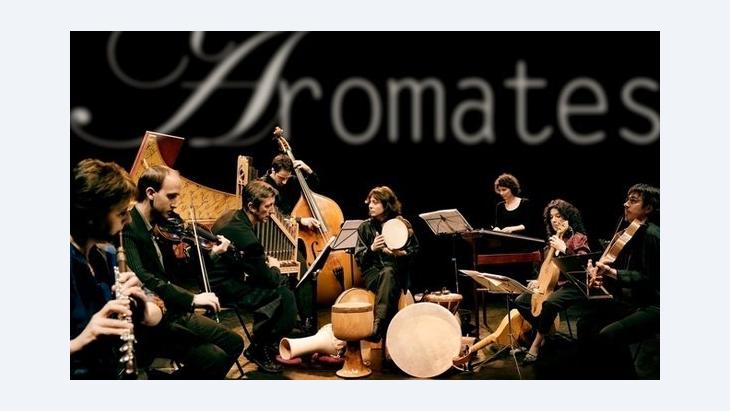 The Wonderful World of Muwashshahat

The French percussionist explores the relationship between old Arab and early European music. In the cultural area that is the Mediterranean, where East meets West, she discovered her musical roots and the sounds of the "muwashshahat". Suleman Taufiq met her in Paris

When did you first become interested in Arab-Andalusian music and what was it that triggered your interest?

Michèle Claude: My family hails from the Mediterranean region and spent 30 years in Tunisia. My mother is Corsican. So the Mediterranean played a big part in our lives. I listened to a lot of Tunisian music in my youth. My father often used to go to the French cafés in the Belle Ville quarter of Paris, where lots of North Africans live. He found it very difficult to adapt to French culture, and he was a bit lost when my parents first came to France.

The so-called Arab-Andalusian muwashshah music, which dates from the ninth century, inspired you and gave you the idea of re-interpreting this music and blending it to create new syntheses. How did you discover this musical genre?

Claude: When I began learning about Arab-Andalusian music, I discovered the muwashshah, which combines classical music with rhythm. The melodies are incredibly beautiful, yet hardly known in the West. I said to myself: "It is inconceivable that people here still don't know this music, although it exists right on our doorstep."

[[{"fid":"11406","view_mode":"large","type":"media","attributes":{"height":"243","width":"265","alt":"Cover of Michèle Claude's CD "Jardin de Myrtes"","title":"Cover of Michèle Claude's CD "Jardin de Myrtes"","class":"media-element file-large image-right"}}]]​​So I set about studying over 200 muwashshahat. Overall, I must have listened to about 500 of them. The Syrian musician Abed Azrie recorded over 20 CDs of this dance music for me and also gave me lots of sheet music. I initially selected 13 muwashshahat and interpreted them freely, just as I wanted to, without actually changing the basic atmosphere of the individual pieces.

What is it about this music that fascinates you?

This music is a synthesis of oriental, Maghribi and Spanish sounds. Is this why it is easier to combine it with European, Western polyphonic and harmonious elements than with other forms of oriental music?

Claude: The relationship between old Arab and early European music is evident in the compositions. Back then, musicians had the opportunity to improvise as they played.

There is a relationship between the sound of the old instruments, which create more musical warmth, and the oriental instruments. One example of this is the vielle: its strings are made of gut. This is what makes the sound of the vielle so unspoiled and gives the instrument its warm sound, which is very different from that of modern violins.

Moreover, earlier musicians used to change the tuning of the instrument, which is another similarity with oriental music. This gave me the chance to create a synthesis between western harmony and oriental music.

What criteria did you use to select the old instruments?

Claude: We used various different forms of flutes: the wooden flute from the nineteenth century, the F flute and the bass flute Then there was the violin, the viola, the vielle, the viola da gamba and the double bass. The music group is a classical quintet. The harmony is provided by the epinette and the psaltery. The sound of this instrument is reminiscent of the sound of the santur and the qanun in oriental music.

Together, the sounds of the epinette and the psaltery create the impression of a harpsichord. Then there are the rhythm instruments that I play. For some pieces we had a baroque guitar and an archlute, which sounds something like a baroque theorbo. On one track, a Persian musician played the ney to create an oriental atmosphere.

Would some elements of Arab-Andalusian music sound familiar to our central European ears?

Claude: Yes indeed. My first CD, Jardin de Myrtes, for example, opens with the track "Samai", which introduces the muwashshah. This piece is similar to a Bach overture.

This oriental form of music contains a section that we could refer to by the letter A. There is also a rhythmic improvisation known as a "ternaire". Then the music returns to section A. It really is like listening to an extract from a European overture.

In your arrangements, you combine the multicoloured sounds of early European stringed instruments and the driving energy of oriental percussion. Did you intend to cross borders in this way?

Claude: I don't know exactly what I was looking for back then; but I do remember one thing very clearly: the muwashshah contained a salsa element that interested me a lot. For me it was obvious; it was instantly recognisable that there is a salsa element in it.

When I said this to the other musicians in our group, they all looked at me with blank expressions on their faces; they didn't have a clue what I was trying to get at. For me, it was absolutely clear and plain to see; for the others, it wasn't.

All muwashshahat were originally intended to be sung, but were later rewritten as instrumental pieces. How were you able to free yourself from the strict nature of this traditional music?

Claude: Sometimes, I listened to the music on CD first and then wrote down the music. This intermediate phase via paper was necessary; I had to go through the written phase so that I could liberate myself from the traditional Arab spirit of this music; I had to rediscover the music. To do that, it was absolutely essential to write down the music first.

But another thing is clear: if I had not already been familiar with these kinds of rhythms and already played them myself, I would not have managed all this. Sometimes I fell back on collections put together by people from Aleppo or Beirut; sometimes I transcribed music myself from what I heard on CD.

You worked with French and German musicians on this project. Was it difficult to play oriental melodies like this?

Claude: Yes, because I could not adopt the original modes in the initial arrangements. And for me, it was out of the question to compose something exclusively Arab, which my musicians couldn't play. Harmony is the basis of Western music.

Without destroying the Arab melody and rhythms – which I still wanted to be to the fore – I had to add something that corresponded to what the musicians could do. But, to put it succinctly, this music portrays the basis of our western music and culture, and when I write this music, it speaks to me because it is also my own music.

A heated debate is raging in the Islamic world about whether the religious and political spheres in Islam are one and the same. Before this matter can be settled, the terms " ... END_OF_DOCUMENT_TOKEN_TO_BE_REPLACED

On their fourth CD "Irade" (willpower), Masaa has left its piano sound behind, yet continues with its new guitarist to pursue a path that bridges jazz improvisation and Arabic ... END_OF_DOCUMENT_TOKEN_TO_BE_REPLACED

Muhyiddin Ibn Arabi (1165-1240) is one of the most influential Arab philosophers and mystics. James Morris, Professor of Islamic Theology at Boston College, explains why his ... END_OF_DOCUMENT_TOKEN_TO_BE_REPLACED

Internationally Bamiyan tends to be associated with the tragedy surrounding its empty Buddha niches. But in recent years the central Afghan province has also been an island of ... END_OF_DOCUMENT_TOKEN_TO_BE_REPLACED

Any journey to southern Spain, to Al-Andalus, is akin to the start of a dream that finds its beguiling continuation beyond the Pillars of Hercules, in the Andalusian cities of ... END_OF_DOCUMENT_TOKEN_TO_BE_REPLACED

Some are suggesting that Muslims are bringing anti-Semitism to Europe. However, it was in fact Europeans who took anti-Semitism to the Arab world in the first place. Diplomats in ... END_OF_DOCUMENT_TOKEN_TO_BE_REPLACED
Author:
Suleman Taufiq
Date:
Mail:
Send via mail

END_OF_DOCUMENT_TOKEN_TO_BE_REPLACED
Social media
and networks
Subscribe to our
newsletter