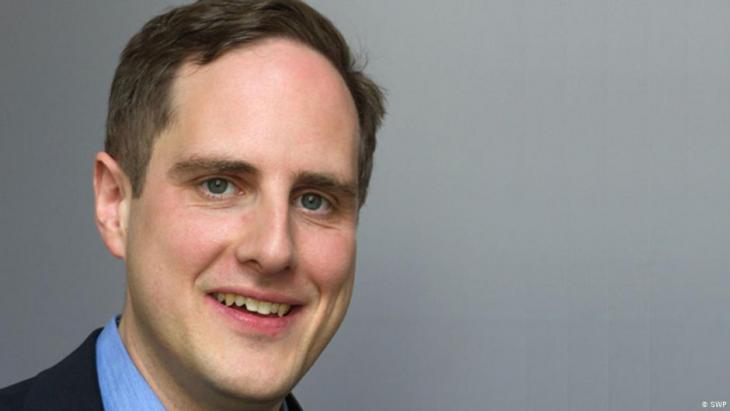 The dispute about maritime territories between Turkey and Greece is heating up. Egypt's involvement has added a new dimension to the conflict, says Middle East analyst Stephan Roll. Interview by Panagiotis Kouparanis

Greece and Egypt have been negotiating the division of their respective EEZs for almost 15 years. As of 13 August, they have an agreement, signed by the Greek and Egyptian foreign ministers in Cairo. Why the sudden rush?

Stephan Roll: This agreement is directly related to the EEZ agreement signed by Turkey and Libya in November 2019, which Greece and Egypt saw as a massive violation of their interests. I don't know to what extent Athens and Cairo negotiated a perfect agreement. In the end, it was a question of putting Turkey in its place.

The EEZ agreement between Greece and Egypt does not take into account the areas east of the island of Rhodes to the easternmost Greek island of Kastellorizo. Those negotiations are still on-going. Why is that?

Roll: The most important thing was to send a message to Ankara, as quickly as possible, making it clear that they would not tolerate Turkey re-defining its maritime borders. That could explain why the agreement was signed now and why the details still need to be negotiated.

We're seeing a tense situation between Greece and Turkey, but also between Egypt and Turkey. What is that all about?

Roll: First and foremost, it is clearly about gas deposits. It is very important for Egypt to develop them: The country's energy strategy rests on large-scale gas exports. But, ultimately, this conflict with Turkey is much, much bigger. It goes back to the 2013 military coup in Egypt, which targeted the ruling Muslim Brotherhood. 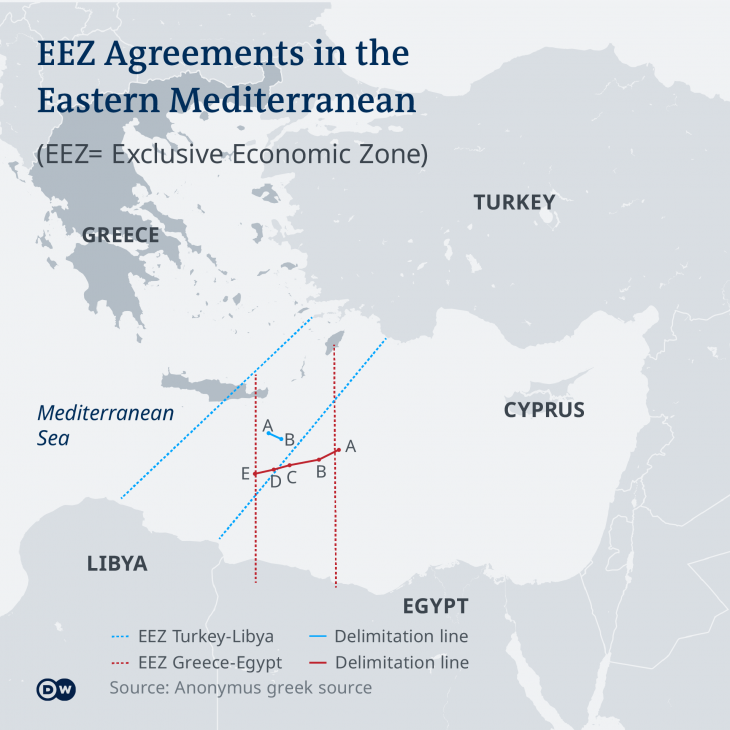 NATO allies at loggerheads, yet the dispute has implications for the entire Eastern Mediterranean: on 13 August, Greece, which claims the waters and other areas south of Greek islands as an exclusive economic zone, signed an accord with Egypt to define the countries' respective EEZs in the Eastern Mediterranean. Turkey called it a "pirate agreement" – and took the opportunity to restart seismic surveys in the region, recently on hold as a result of mediation by German Chancellor Angela Merkel and the European Union

The Turkish-Libyan EEZ agreement and Turkey's engagement in Libya have infused the current conflict with a new dynamic. The fact that Turkey is very active in Libya and has sent mercenaries to the country to fight on the side of the government against General Haftar, who in turn is supported by Egypt, is a new situation for Cairo. Cairo feels extremely threatened by the fact that Ankara is suddenly part of the action in its own backyard.

You may also like: Turkey versus France – a game of one-upmanship in Libya?

Germany's foreign policy is explicitly values-based. But what happens, Ralf Bosen asks, when democracy, the rule of law and human rights collide with the logic of trade and ... END_OF_DOCUMENT_TOKEN_TO_BE_REPLACED

"The people aren’t ready for democracy" has been the constitutional basis for Arab tyranny, its favourite slogan and its sacred narrative for more than a century. Yet, asks Khaled ... END_OF_DOCUMENT_TOKEN_TO_BE_REPLACED

A new global database shows a significant gap in reported COVID-related deaths, suggesting the actual worldwide death toll is short by at least 1 million. That's due in part to ... END_OF_DOCUMENT_TOKEN_TO_BE_REPLACED

Two decades after the attacks of 11 September 2001, the West faces the shattered debris of its failure – not only in Afghanistan, but also in Iraq, Syria, Libya and Yemen. What ... END_OF_DOCUMENT_TOKEN_TO_BE_REPLACED

The coronavirus pandemic has turned lives upside down all over the world. In the Middle Ages, however, people lived with epidemics all the time. The best and most famous ... END_OF_DOCUMENT_TOKEN_TO_BE_REPLACED

In Ancient Egypt, the pharaohs had "solar boats" built to take them into the afterlife. One of these boats was discovered in 1954. It has now been moved to the Grand Egyptian ... END_OF_DOCUMENT_TOKEN_TO_BE_REPLACED
Author:
Panagiotis Kouparanis
Date:
Mail:
Send via mail

END_OF_DOCUMENT_TOKEN_TO_BE_REPLACED
Social media
and networks
Subscribe to our
newsletter