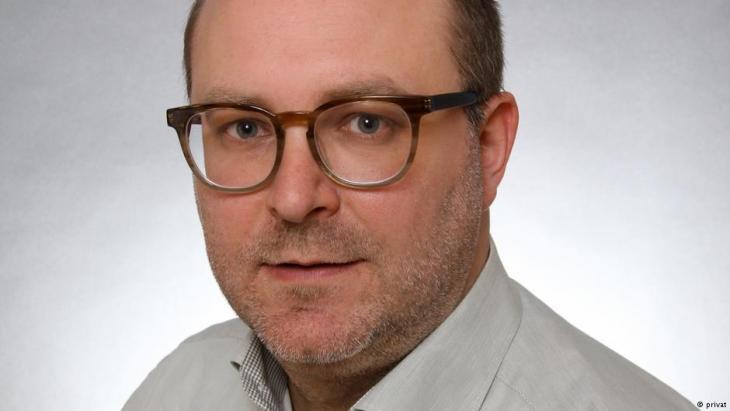 Many of King Abdullah II's regional policies are unpopular with Jordanians because they are perceived to be selling out Arab interests. In an interview with Diana Hodali, Middle East expert Andre Bank explains why this is so

What role does Jordan play in the current geopolitical situation in the Middle East?

Andre Bank: The Hashemite monarchy consistently aims to adopt the role of mediator whenever conflict flares up in the region, refusing to come down clearly on one particular side. This is partly due to the country’s location at the heart of the Middle East, which sees it directly affected by many conflicts such as those in Syria, Palestine and Iraq. In addition, its dependence on resources from abroad means that the financial survival of the state of Jordan is for the most part assured through external donors. As a result, Jordan is unable to take a clear stance against many nations.

Bank: It can’t take a stand against Israel, for instance, because a peace treaty has existed between both nations since 1994. This is extremely important for relations with western countries, such as its main financier, the USA, but also with the EU, including Germany. Nor can it afford to position itself against Saudi Arabia, the United Arab Emirates and Kuwait, Jordan’s most important financiers in the region.

Have Israeli-Jordanian relations changed since 1994?

Bank: The peace has remained a cold peace. There hasn’t been any direct confrontation between the two countries. But relations – especially since the advent of Prime Minister Benjamin Netanyahuʹs right-wing government – have cooled considerably. On the other hand, Israel is important to Jordan from an economic perspective. The Jordanian people, however, remain extremely wary of Israel and of its government in particular. 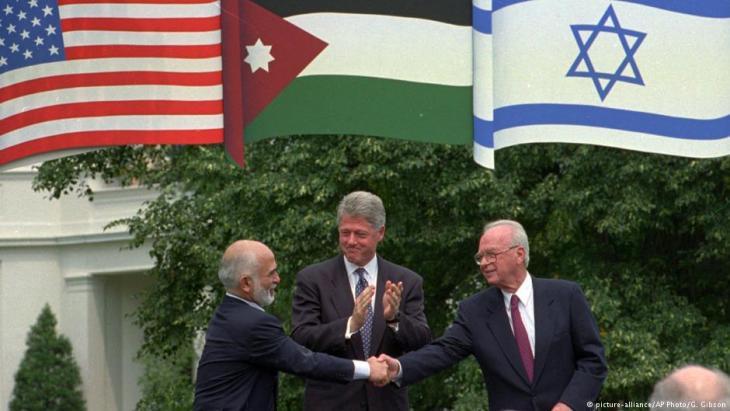 Ever a cold peace: on 26 October 1994, King Hussein of Jordan and Israeli Prime Minister Yitzhak Rabin signed the Israeli-Jordan Peace Treaty. Since then, there has been no direct confrontation between the two countries. However, relations – especially since the advent of Prime Minister Benjamin Netanyahuʹs right-wing government – have cooled considerably

Israel and the Gulf States – in particular Saudi Arabia – have been moving closer together for a while. Does this affect Jordan?

Bank: At the very least, this could mean that Jordan would not be able to act as a mediator, as has often been its wont in Israeli-Saudi relations or in relations between Israel and other Gulf states. Having said that, its geographical location is where it is – and it retains a central role for the future of Syria, for the stabilisation of Palestine and also for good ties with Egypt.

The Gulf states provide financial support to Jordan, as does the USA. Is Jordan economically dependent on the Gulf states?

Bank: Because of the scarcity of resources, population growth and an inadequately diversified economy, Jordan is extremely dependent on such support. This means that Jordan can never openly position itself against Saudi Arabia and the Emirates. But the government is also striving to find a compensatory policy approach and according to the situation, attempting to improve its relations with states such as Qatar, Kuwait and other financially-robust Gulf nations, as a way of opening up alternative sources. There are regular efforts to secure flows of cash into the country, which the monarchy can then channel to key social groups.

How can we expect Jordanian women to participate fully in political life if they know that they don’t enjoy the same legal status as their male counterparts, or the constitutional ... END_OF_DOCUMENT_TOKEN_TO_BE_REPLACED

Despite Syria's lengthy civil war, dictator Bashar al-Assad is now being courted by many governments in the Middle East as if nothing ever happened. The reasons for this vary. By ... END_OF_DOCUMENT_TOKEN_TO_BE_REPLACED

Horses and mules have long drawn tourist carriages through Jordan's ancient city of Petra, but animal rights concerns are driving a project to start replacing them with electric ... END_OF_DOCUMENT_TOKEN_TO_BE_REPLACED

Jordanian writer Jalal Barjas' novel "Notebooks of the Bookseller", which won this year's Booker International Prize for Arabic Fiction, was celebrated at a symposium during the ... END_OF_DOCUMENT_TOKEN_TO_BE_REPLACED

Winner of the Student Oscar: a little girl in a bombed-out flat in Syria. The television is her only window to the world – but even this is taken away from her. Nikolas Fischer ... END_OF_DOCUMENT_TOKEN_TO_BE_REPLACED

While Bashar al-Assad is still shunned by the West, which blames him for a decade of brutal war in Syria, a shift is under way in the Middle East, where Arab allies of the United ... END_OF_DOCUMENT_TOKEN_TO_BE_REPLACED
Author:
Diana Hodali
Date:
Mail:
Send via mail

END_OF_DOCUMENT_TOKEN_TO_BE_REPLACED
Social media
and networks
Subscribe to our
newsletter