Mohammad Ali Abtahi, director of the "International Institute for Interreligious Dialogue" in Tehran, was a close associate of the reform-oriented Iranian President Mohammad Khatami. But among young Iranians the theologian is best known as "the cool blogger." Naghmeh Hosseini spoke with Abtahi in Tehran

Abtahi: "For countries with ideological systems of rule, the internet brings major changes. The rulers of these countries have tried to fight against it, but the wave was too overpowering!"

Mohammad Ali Abtahi: There was a great deal I wanted to say as a person, and not in my official capacity as politician or cleric. Many people were against it at the beginning; the conservatives found that a web log was beneath the dignity of a statesman, and especially of a cleric. But I didn’t stop writing and simply waited for them all to get used to it. My blog then became a forum for the reformers.

What themes do you write about – and how do you manage as cleric to win over so many young adherents?

Abtahi: I write mostly on political themes from the reformist perspective, but also on social issues that interest and preoccupy Iranian youth. Perhaps that’s why I have so many young followers, because I understand them, I listen to them – and speak to them eye-to-eye. The most important thing, though, is that I address them using the technology they have appropriated for themselves.

What role does the internet play in Iran? Can it contribute to political and social liberalization?

Abtahi: According to the Iranian constitution, which was written 30 years ago, private radio and television are not permitted. Back then the government wanted everything to be seen and heard from the point of view of the state-controlled media. 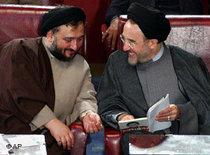 Under President Khatami, Abtahi was the Iranian Vice President for Legal and Parliamentary Affairs. Abtahi had resigned from his post after the election of 2004, saying he could not work with the conservative-dominated parliament

​​ In the past 15 years much has changed in the world, and these changes have also reached Iran. In the era of political reformers in Iran (1997 to 2005, editor) it was clear to us that civil society can only develop if there is effective communication between the citizens and representatives of the state. We also realized that the internet could help us to become part of the world community.

Abtahi: Ten years ago, when the internet became available to young people in Iran, it was not used for entertainment. Instead, for a large number of young people it was, and is, a tool for expressing their political and personal opinions. This was because other private media were lacking in the country, but it can also be attributed to the social pressure on youth – especially with regard to their private lives.

How did the government react to the activities of the bloggers?

Abtahi: At first, the bloggers did not have government approval, but their growing numbers forced the regime to accept them. Today, Iranian bloggers influence political decisions, because politicians keep close watch over what they write. The bloggers have also seen to it that the children of those who emigrated after the revolution don’t become estranged from the Persian language and culture.

Blogs are read worldwide, unlike print media such as newspapers. Are they also capable of driving reforms in Iran?

Abtahi: For the religious state, many themes were prohibited, such as reports on the private lives of singers or actors. But the power of globalization has changed everything. Now Iranian youth have access to the same information as young people in the US or Japan. And they also share common values, such as human rights for example. Young people in Iran are just as sensitive as others to human rights violations elsewhere in the world.

Not everyone in Iran has access to the internet. Isn’t there a risk that important issues can only be discussed by the young, the educated and the wealthy?

Abtahi: Yes, I do in fact see that as a danger. The government must try to make the internet available to a wider range of people – and make it easier to access. In our major cities we already have good access thanks to the large number of internet cafés. I’m optimistic about the future: it will be easier to access the internet than to read the newspaper.

What do you think of the danger that news can be manipulated through the internet?

Abtahi: Iranian internet users don’t obtain all their information from a single source, but rather from many; that helps them separate what is true from what is false. But in general, the internet must not be allowed to replace reading books, and a web log can’t take the place of a news agency. After all, an agency has to take responsibility for the news it publishes.

Does the internet mean that state censorship is no longer significant?

Abtahi: For countries with ideological systems of rule, the internet brings major changes. The rulers of these countries have tried to fight against it, but the wave was so overpowering that it was like trying to block the course of a river with a bag of sand.

Certainly, every individual has his own set of values and feels responsible for his children and his family, especially when it comes to moral issues. It’s possible to set up personal filters to screen for undesirable content. But when it comes to politics, this is not possible, because there’s just too much political information being published. And, besides, filtering by the state only serves to strengthen the credibility of the active Iranian bloggers.

Nasreen Alavi
Iran's Burgeoning Weblog Scene
In her book "We are Iran. The Persian Blogs," Nasreen Alavi takes an in-depth look at the multifaceted anti-mullah protest culture flourishing on the Internet in Iran. Golrokh Esmaili reports

END_OF_DOCUMENT_TOKEN_TO_BE_REPLACED
Social media
and networks
Subscribe to our
newsletter