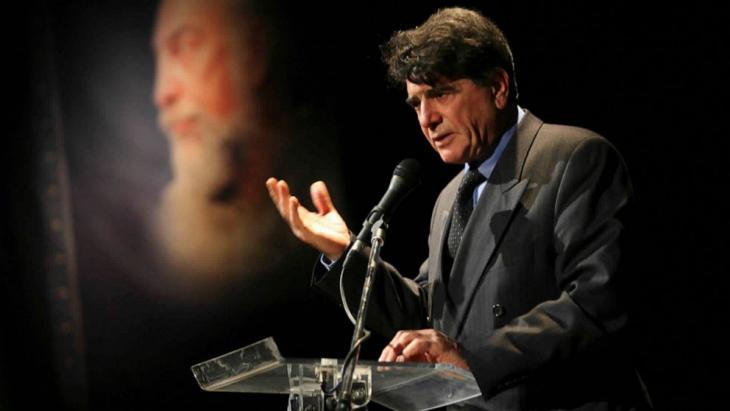 ﻿﻿For Iranians around the world Mohammad Reza Shajarian is the embodiment of classical Persian culture. In the summer of 2009 his support of the Iranian reform movement made him vastly popular among the young generation. An interview by Marian Brehmer

You're touring Europe at the moment. Can Europeans actually understand the depth of Persian music?

Mohammad Reza Shajarian: The Iranians in Europe can understand the music and its meaning. Europeans without Iranian roots can get a feel for the music, but not for the words. My music is based on poetry. All it does is to express the poem. Without knowledge of Persian literature you cannot understand the connection between music and words.

What comes to your mind when you think of Germany?

Mohammad Reza Shajarian: To me, Germany is about being hard working and tidy. Since 1987, I have been performing in Germany about every second year.

In Germany, Iran's public image is shaped by politics and by the nuclear issue. Do you see yourself as an ambassador for your country when performing abroad?

Mohammad Reza Shajarian: I don't know if Iranians would consider me as their ambassador or not. But our Iran is not what the government claims it is. Our people are entirely different from our government. They have nothing to do with terror and killing or nuclear power. Actually, this difference is really striking. That's why we can observe a big conflict between people and government at the moment. 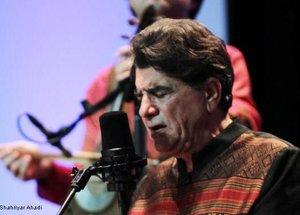 "You cannot discuss with guns, only with reason." Mohammad Reza Shajarian has not only given Iran a voice for fifty years, but he is also an acclaimed calligraph and designer of musical instruments

​​In the strict sense of Islamic jurisdiction string instruments are haram, forbidden. On the other hand, Iran has a rich tradition of classical music. Although there are many gifted singers, Iranian women are not allowed to sing in public. Their voices are considered arousing by the mullah regime. How to cope with these contradictions?

Mohammad Reza Shajarian: This contradiction was created 1400 years ago. The Islamic fractions will not give up trampling on our culture, nor will Iranians give up their culture. This contradiction will continue to exist. The government is opposed to the very Persian identity of Iranians and wants to impose its Islamic identity on us. But while accepting Islam, Iranians have never lost their culture.

Were you able to perform more freely in the Shah's time?

Mohammad Reza Shajarian: In these days, no one needed to ask for permission. But since the revolution we need to obtain permissions from different departments, such as the ministry of culture and Islamic guidance, from the police department in charge of the concert venue and from the local Friday Imam. If only one of them objects, the permission is not granted. The authorities create all these obstacles in order to make the artists give up. They only leave us one tiny possible way, which complies with their rules. They are not only in total dispeace with our culture; they also want to eliminate it.

Do you think any reconciliation with the culture can happen within the current system?

Mohammad Reza Shajarian: No, there is no way.

So would you prefer to turn back the clock?

Mohammad Reza Shajarian: No, there's no use in going back. We should build the future.

You are one of the few musicians who were still allowed to perform regularly in Iran after the revolution of 1979. Why? 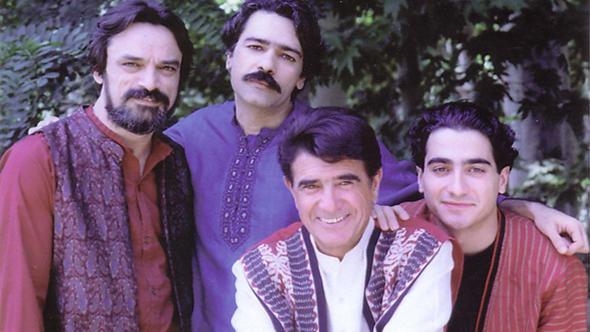 "Democracy does not come by means of slogans and revolutions. It must start in the family." Mohammad-Reza Shajarian has been called "Iran's greatest living master of traditional Persian music." From left to right: Hussein Alizadeh, Keyhan Kalhor, Mohammad Reza Shajarian, Homayoun Shajarian

​​After the revolution, all bars were closed. As I have never played in bars, the government wanted to use me as an example of a compliant musician. In that way, they wanted to show that there are not completely opposed to music.

How did you experience the time of revolution?

Mohammad Reza Shajarian: Iranians have been fighting for their freedom for 100 years. Their last try was in 1979. Initially, the revolution was not Islamic at all. Then clerics entered the scene and suggested their Islamic Republic. There was a referendum. Trusting the clergymen, most people voted for an Islamic Republic. I didn't trust them from the very beginning. I didn't vote for them and I will never do.

But you also fuelled the revolution with your music. What did you intend to express at that time?

Mohammad Reza Shajarian: Songs sung in a revolutionary mood have a great impact on people. My song "Iran, ey saraye omid" (Iran, Land of Hope) was very popular among the audience. People didn't want the Shah regime anymore. That song expressed the resurrection of people, moving towards democracy. After the revolution, the Islamic Republic continued to play it on the radio. After the 2009 protests I finally forbid it and told them: I didn't perform it for you, it was meant for another time. This was the first time my music ever gained an explicitly political meaning.

Your ban caused a great stir. What incited you to take this step?

Mohammad Reza Shajarian: The reason was the behaviour of the government towards people. It was unbearable. No one can be silent. I am not a political activist, I am just an artist who knows his society and who serves it. When I heard them play my song on state TV, I sued them.

Two months after the contested presidential elections and in the midst of the 2009 protests you sang "Zabane Atash" (Language of Fire). With this song you turned into a supporter of the green movement and became very popular among young Iranians in a short time. What was the message of that song?

Mohammad Reza Shajarian: There were so many people on the streets, beaten and arrested. All that prompted me to sing "put the guns down". I considered it my duty to voice this statement. You cannot discuss with guns, only with reason. The "Language of Fire" will lead to nothing; it will only make the path more dangerous.

What was the government's reaction?

Mohammad Reza Shajarian: In that summer I was touring around Europe. I released the song overnight on "Youtube". 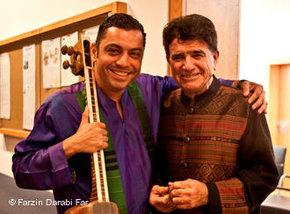 "I must be with people and I receive inspiration from them. Otherwise, I would not be able to sing." Shajarian and the Iranian musician Farzin Darabi

​​Only when I gave an interview to the BBC, I received a warning from the secret service. My response: You do what you have to do, and I will do what I have to do. Since then I was not allowed to release new songs. They withdrew my permission.

Why didn't they arrest you?

Mohammad Reza Shajarian: The government is afraid due to my authority among people. They try all they can in order to cut my connection with people by spreading rumours. For instance, they have claimed I had left Iran forever.

Do you think that the rulers are listening to your music in private?

Mohammad Reza Shajarian: Yes, of course. They have also been raised in this culture; it's not strange to them. They listened to it in the past and they are still listening to it. But they are trapped in their own ideas. They have conflicts among themselves. Some advocate a total ban on music, others don't.

The five decades of your career in Iran were shaped by political change and turmoil. What role did your music play for Iranians in all these years?

Mohammad Reza Shajarian: My music was always fully related to events in Iran. My choice of poems actually mirrors our social history. They reflect politics, while not directly pointing at it. My songs deal with people's lives. I must be with people and I receive inspiration from them. Otherwise, I would not be able to sing.

Music played a role in the current changes of the Arab world, in Tunisia and Egypt for instance. Can music be a means of real change?

Mohammad Reza Shajarian: Music has always elevated and stirred societies. This is the same in the Arab movements. It is good what is happening in these countries, but only as long as the people's will prevails. Democracy does not come by means of slogans and revolutions. It must start in the family. Societies, in which families are not functioning in a democratic way will not reach democracy.

How do you see your country in ten years?

Mohammad Reza Shajarian: There lies a very sensitive, crucial, and dangerous path ahead of us. This path is inevitable, people have no other choice. (Pausing for a while) If it stays as it is, I don't see any future for Iran. The situation is getting worse day by day. For people, it's a constant downfall. Yes, it is a very dangerous and hard path. We should delete these thirty years from our history. They have no relation to our culture.

What is running through your head when you perform on stage?

Mohammad Reza Shajarian: I think about the inner desires of human beings. Humanity should rule the world, not religion, not nationalism, not ideology. When people are valued, everything is in balance. The purpose of religion is to connect people. We should not put it in the centre and sacrifice people for religion's sake. Humanity is what art is all about. I look at everything with this idea in mind.

Young women are driving forward the protests against the Iranian regime, which have been going on for months. Literature provides clues as to why that should be, and why the ... END_OF_DOCUMENT_TOKEN_TO_BE_REPLACED

Visiting the country of her parents, murdered by the Iranian regime in 1998, German-Iranian artist Parastou Forouhar finds a changed society: hopeful, strong and courageous, ... END_OF_DOCUMENT_TOKEN_TO_BE_REPLACED

Iran's president Ebrahim Raisi is overseeing an unyielding crackdown. The current situation grimly echoes his role in a purge of political prisoners in 1988 END_OF_DOCUMENT_TOKEN_TO_BE_REPLACED

Ballet performances are prohibited in Iran. In her film "1001 Nights Apart", director Sarvnaz Alambeigi documents the history of dance in the Islamic Republic. By Fahimeh Farsaie END_OF_DOCUMENT_TOKEN_TO_BE_REPLACED

Chinese President Xi Jinping's visit to Saudi Arabia in December 2022 may have rattled Washington, but it simply highlighted the Arabs’ desire to diversify their foreign relations ... END_OF_DOCUMENT_TOKEN_TO_BE_REPLACED

There are signs of an imminent normalisation of relations between Turkey and Syria. This would allow Erdogan to score political points domestically before the upcoming elections ... END_OF_DOCUMENT_TOKEN_TO_BE_REPLACED
Author:
Marian Brehmer
Date:
Mail:
Send via mail

END_OF_DOCUMENT_TOKEN_TO_BE_REPLACED
Social media
and networks
Subscribe to our
newsletter