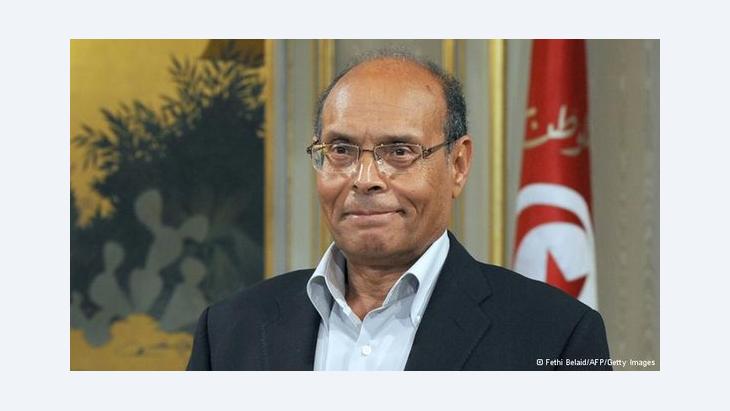 Interview with Moncef Marzouki
''We Don't Have a Magic Wand''

﻿Ahead of his visit to Germany, Tunisian President Moncef Marzouki told Sarah Mersch that his country could take a leaf out of Europe's book as it struggles with the transition to democracy and that Tunisia would welcome help from Germany in a number of areas

Moncef Marzouki: Of course, more than ever. That's because if this country wants to tackle its socio-economic problems, it needs political stability. I want us to find a consensus with respect to the constitution and the government. We need a message of reconciliation to bring peace to the country so that we can continue with the transition to democracy.

Tunisia has not yet overcome its crisis. How do you think a solution can be found with the government under the leadership of Prime Minister Ali Larayedh?

Marzouki: We're dealing with the problems of a country that has just gone through a revolution and is in the process of building democratic structures. You can see a clear difference between Tunisia and other countries: Portugal needed eight years for democratisation, Spain took three and we're doing it in two. Tunisia has gone through many political crises but the country has always remained stable. I think we're making good progress.

In which areas are things going well?

Marzouki: Until two years ago, we had a dictatorship in this country with no freedom of expression, no freedom to demonstrate and no opportunity to set up non-profit organisations. We've now got those freedoms. The press criticises the government and the president from morning to night. More than a thousand non-governmental organisations have been formed and more than a hundred parties. So in this respect, the transition is complete. 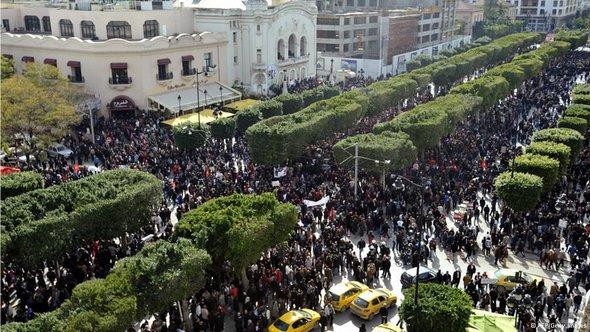 People in Tunis demonstrate 40 days after the assassination of Chokri Belaid: according to President Marzouki, agreement and moderation between the various political forces in Tunisia are more important now than ever before because the country needs political stability if it is to tackle its socio-economic problems

But we are lagging behind on the socio-economic front because we discovered that the situation is much worse than we thought. We are working on it, but we don't have a magic wand. Besides, we're currently rebuilding and reforming state institutions. We're taking time so that the media regulatory body, the election authority and the law on independence of the judiciary are all based on the greatest possible consensus. But it's a long, complex and frustrating process. We are losing an unbelievable amount of time and energy. But that is a real learning process in a democracy.

You stress that social and economic factors in particular led to the uprising in Tunisia. But if you follow the debates in the Constitutional Assembly and the media, questions about identity dominate.

Marzouki: There are two kinds of extremism in Tunisia: the religious and the secular. The first category includes Salafism, which is only a façade for a social problem. The impoverished working class has been rising up against the Ennahda party, which considers itself a moderate Islamic party. On the other hand, you have secular extremists who get hot under the collar when they hear of Islamists or even just the word "Islam." But for the majority of Tunisians, the important questions revolve around bread, water, electricity and economic development.

Speaking at the European Parliament recently, you said that the post-revolution period is more difficult than the revolution itself. What's the biggest challenge?

Marzouki: It's a psychological challenge. People think that problems simply disappear after a revolution. But they don't; they just change. We used to have the problems of a dictatorship; now we have the problems of a democracy. Of course there are immediate concrete results of a democracy too – the fact that people aren't afraid anymore is fantastic – but economic expectations are so high that there is also disappointment. It's impossible to meet the demand that corruption should end overnight and everyone should get jobs. 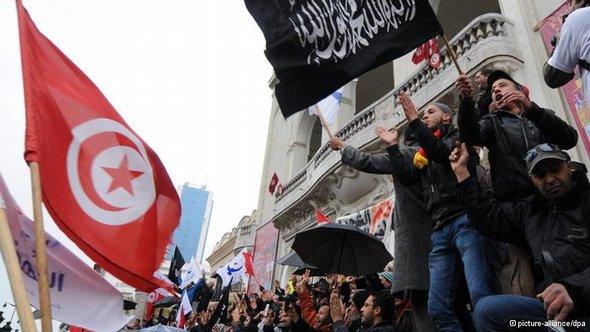 Many countries in the European Union supported the former President, Zine al-Abidine Ben Ali, for a long time. Today, the EU supports the new government but also criticises the strengthening of Islamists. Do you still see Europe as a credible partner?

﻿﻿Marzouki: The EU is our most important partner and we want it to stay that way. It's true that many Europeans equate Islamists with terrorists. They will have to change their perception and learn that there are different kinds of Islamism. Just like the Christians Democrats in Europe, we will have Islamic Democrats who are conservative, but at the same time respect democracy.

What do you expect from Europe in concrete terms?

Marzouki: Germany has plenty of experience in building up a constitutional court. It can support us in the same endeavour. We're very happy that Germany has accepted to divert part of Tunisia's debt into development projects. We would also like to set up a German-Tunisian university and work together in key areas such as energy.

Since the revolution in Tunisia, the significance of regions has become all important. Is the German federalist model interesting for Tunisia?

﻿Marzouki: Yes, absolutely. I've suggested a project in which Tunisia would be divided into seven regions that would be largely independent when it comes to economic development. It would be great if Germany would take over a kind of sponsorship at all levels: civil society, regions and state.

Tunisian President Moncef Marzouki visited Germany on 21 and 22 March. Having studied medicine and psychology in Strasbourg, he worked as a doctor in France. In 1979, he returned to Tunisia where he headed the Tunisian League for Human Rights from 1989 to 1994. He spent four months in prison after he tried running in elections against former President Zine al-Abidine Ben Ali in 1994.

One year ago the Taliban returned to power, seizing Kabul; the U.S. and its allies made a panicked exit from the country. Of all the books written on the subject, four stand out ... END_OF_DOCUMENT_TOKEN_TO_BE_REPLACED

In "Iran. Die Freiheit ist weiblich", journalist Golineh Atai describes the dogged resistance of courageous Iranian women against the Islamic Republic and the mullahs who have ... END_OF_DOCUMENT_TOKEN_TO_BE_REPLACED

Unflattering terms were used at a German Football Association human rights congress aimed at "intensifying the discussion" ahead of the World Cup. One speaker in particular made ... END_OF_DOCUMENT_TOKEN_TO_BE_REPLACED

Egyptian authorities have Mada Masr in their sights once again after critical reporting. But the editor of the country's last independent news source is adamant they will continue ... END_OF_DOCUMENT_TOKEN_TO_BE_REPLACED

Like Christianity, Europe's history is one of migration. Both have strong roots in the Orient and in cultures thousands of years old. Cultural historian Bernhard Braun invites us ... END_OF_DOCUMENT_TOKEN_TO_BE_REPLACED
Author:
Sarah Mersch
Date:
Mail:
Send via mail

END_OF_DOCUMENT_TOKEN_TO_BE_REPLACED
Social media
and networks
Subscribe to our
newsletter