Interview with Mouhanad Khorchide
"For Me, It's a Question of Finding a Contemporary Interpretation of Islam"

Mouhanad Khorchide, originally from Lebanon, has been appointed Professor of Islamic Religious Education Theory at the University of Münster, where he will take over from Sven Kalisch, a controversial figure in Muslim circles. Kersten Knipp interviewed the theologian

Mr Khorchide, which theological and pedagogical principles will guide you in your new office?

Mouhanad Khorchide: I will advocate a humanistic theology. It is my belief that religion is there for people, not people for religion. So it's important to me that theology is concerned both with people's spiritual needs and their everyday needs. It's not about conveying laws and dogmas. I want to convey an image of Islam that has nothing to do with a religion made of laws. Furthermore, this kind of theological understanding is easily reconciled with the principles of a constitutional state and life in a pluralistic society.

How will this be apparent in your teaching?

Khorchide: I'm interested in a modern theory of religious education. I envision a kind of religious education that takes as its starting point the everyday reality of pupils' lives. I want to make a connection between religion and the reality of their lives instead of just indoctrinating them with religious laws. That's not the purpose of religion. At the same time, many children of Muslim immigrants have the problem that they don't speak their parents' language – in most cases Turkish or Arabic – well enough. They don't have sufficient knowledge of the language to be able to follow the imam's sermon in the mosque, for example. Thus many of their needs are not met. It's the responsibility of Islamic religious education to respond to these needs. Modern religious education should reach out to young people and enable them to take an active role in shaping their religiousness. It should also enable them to have their own personal experience of God. It shouldn't try to make up their minds for them in this.

What do you think of the religious education offered by the mosques in Germany? 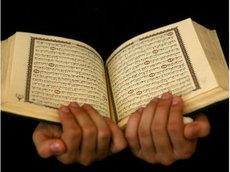 Understanding the Koran in its historical context: As a Muslim and theologian, Khorchide believes that the Koran is the word of God not only for the people of the seventh century, but also for humankind today

​​ Khorchide: There is certainly extensive religious education on offer in the mosques, but what is offered is not usually youth-oriented. It is usually dogmatic and preaches a kind of Islam with which many young people don't feel much of a connection. Various empirical studies on the subject have shown that this is why many young people distance themselves from Islam and lose interest in religious issues. They don't want a religion that imposes restrictions on them. What they want is a religion that is there for them, one that understands their concerns.

What should be the relationship between the teaching in the mosques and that in schools?

Khorchide: They should complement each other, develop a complementary relationship. In my opinion, religious education in state schools should not replace what is taught in the mosques. Nor should it be introduced with the aim of getting children out of the mosques. In any case, experience shows that this doesn't work. That, however, presupposes a constructive cooperation with mosque congregations. We have to seek a consensus. Otherwise schoolchildren may hear in the mosque that this or that religious education class is not authentic enough or not Islamic enough, and that could result in religion losing its credibility with them. We have to prevent that from happening.

What is your appraisal of the current dialogue among the religions in Germany?

Khorchide: There is very intensive communication here in Germany among the different religions. One positive example of this is the German Conference on Islam. Another is the numerous interreligious events and initiatives to promote dialogue, which take place regularly and are strongly supported by the state.

And what role do you see the Muslim organizations playing?

Khorchide: The Muslim organizations have opened up much more over the past few years. They are far more interested in dialogue than they were 10 or 15 years ago. Nonetheless, I would like them to devote themselves more to theological questions. I find that this is sometimes lacking. They want to represent Muslims politically. This is good, but it's not enough. They must also be open to theological debate – not only interreligious debates, but also inter-Islamic ones. It's a question of creating a common theoretical basis for the future of Islam in Europe.

Islamic organizations in Germany must also open up to theological debates – not only interreligious debates but inter-Islamic debates as well, says Mouhanad Khorchide

​​ How do you see the relationship between Islam and the modern world? What, in your opinion, are the principles of a contemporary interpretation of Islam?

Khorchide: The Koran is regarded as the word of God. As a theologian, I am concerned with the question of how we deal with this word of God. How do we understand it properly? Should we take the whole of the Koran literally? Should we transfer word for word to the present day everything that was revealed in the seventh century, including individual legal instructions – in criminal law, for example? I don't think so. For me, it's a question of finding a contemporary interpretation of Islam. This interpretation should ask what answers were given in what social context to what questions. We have to understand what people's concerns were at that time and what the meaning was of the answers that were given at that time. On the basis of hermeneutics we can then ask ourselves what meaning the sacred texts have for us today. As a religious Muslim and theologian my assumption is that the Koran is not only the word of God for the people of the seventh century, but also for us today. But in order to answer this question we have to read the Koran in its historical context. If we neglect to do that, we cannot understand it properly.

Is this kind of hermeneutics accepted in the Islamic world?

Khorchide: Muslims had already developed their own hermeneutics in the eighth century. It inquired into the circumstances of the revelation. Unfortunately this tradition was not pursued; it died out. This is why I would argue all the more strongly in favour of a historical-critical approach today. We absolutely need this. However, I think many Muslims misunderstand the term. They think "historical-critical" means that the Koran has become historical and is therefore no longer relevant for us today and that "critical" means only that it is permitted simply to refute the Koran. That is a complete misunderstanding. What the term actually means is in fact nothing other than that we must thoroughly investigate the historical context. Our task must be to find the spirit behind the letters. It's a question of the general principles proclaimed by the Koran. How people then implement these principles in their daily life depends on the particular context.

Qantara.deCriticism of Islamic Theologian Muhammad KalischDoubt about Muhammad's Existence Poses Threat to Islamic Religious EducationMuhammad Sven Kalisch is an Islamic researcher at the University of Münster. He is also the first person in Germany to hold a Chair of Islamic Religion. Kalisch's recent public admission that he is unsure whether the Prophet Muhammad was actually a historical person has got him into hot water. Peter Philipp has the details Islam and Religious CriticismA Question of Decency and TactMuhammad Kalisch, Professor for Islamic Studies at the University of Münster, Germany, sharply criticises that Islam in Western media is often portrayed as "the enemy", but argues that there must be absolute freedom of speechIslamic Religion and Studies at German Schools Many Obstacles to OvercomeTrial lessons are being held in many of Germany's Länder. But "Islamic Religion" is still not being provided as a standard part of the curriculum in Germany. By Lamya Kaddor

END_OF_DOCUMENT_TOKEN_TO_BE_REPLACED
Social media
and networks
Subscribe to our
newsletter