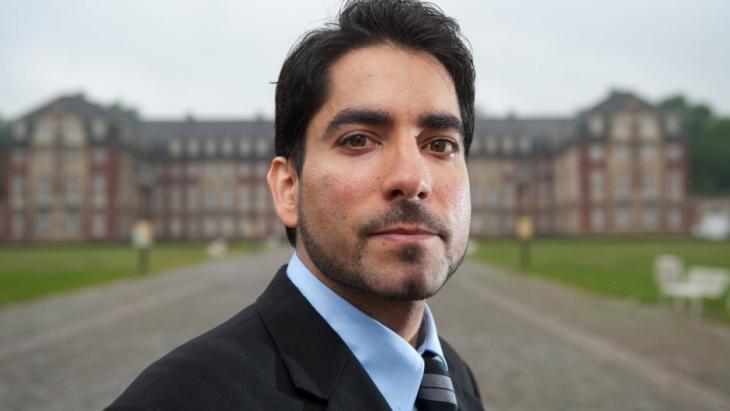 The new book by Islamic Studies scholar Mouhanad Khorchide argues for a modern understanding of the Koran and considers the relationship between God and humanity. "The Koran aims to bring up mature human beings, who develop their own religious nature", says Khorchide. Interview by Canan Topcu

Professor Khorchide, your new book is called "Gott glaubt an den Menschen. Mit dem Islam zu einem neuen Humanismus" (God believes in humanity. Towards a new humanism with Islam.) The title alone, as we have seen from the initial reactions from Muslims, is causing confusion…

Mouhanad Khorchide: That may be because of the ambiguity of the word "believe" – when I talk about God's belief in humans, I mean it in the sense of "having faith in" them, which is how we understand it in religious studies. God has faith in humanity. So then you might ask: how do we know that God has faith in humanity? You can approach the answer from a number of directions.

From the theological perspective and from my perspective as a believer, it would be: God didn’t create man in order to be worshipped by him. God – considered as absolute – is not dependent on man; God gives unconditionally, He doesn’t want to infantilise man, he has given him the capacity to take the wheel himself and act independently. 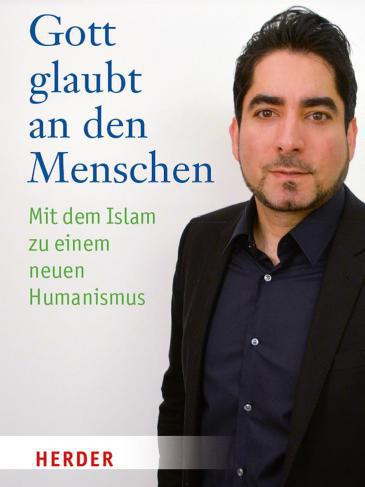 "God is a humanist": In his new book, the Islamic Studies scholar Khorchide advocates a theology with an image of an all-compassionate God at its centre, which weighs what the Koran has to say about love and compassion

You say in your book that God endowed man with freedom and reason. And that God doesn’t want man to do one thing or another just to "buy" His favour. But as a Muslim, that's not the image of God that I grew up with. In my religious lessons in the mosque, I was taught that I had to behave a certain way so as not to commit any sins, that I had to do this thing and not the other so that Allah wouldn't be angry with me, or so God would be pleased with me. How has there come to be such a different view of God among Muslims?

Khorchide: Islam suffers terribly from the way we as Muslims reduce it to a legal, normative level. The main thing a believer wants to know is: "What am I allowed to do and what am I not?"; “What is permitted and what is forbidden?" But the Koran wants to bring up mature human beings who develop their own religious nature. Religion aims to touch people's hearts. But how can I love and have faith in God if my relationship to Him is solely defined by legal categories?

Some educators try to reach their goal quickly through a pedagogy of fear, because they assume that God is only concerned with people carrying out orders. The Koran speaks a different language – here, God is closely and unconditionally devoted to humanity; He defines his relationship to man with the category of love: "He shall love them and they shall love Him" (5:54). Unfortunately, we Muslims have all but given up on this loving God, and replaced Him with the projection of an idea of a patriarch.

Reason and freedom – these are two terms that come up a lot in the book, but they don't come up as often in the Koran, as a critic said following a public discussion of your book. What's your response to an objection like that?

Khorchide: Terms like human rights and democracy don't appear in the Koran either, but that doesn't mean they stand in opposition to the spirit of the Koran. These terms and concepts were unknown in the seventh century. But the language of the Koran is strongly imagistic and it has to be decoded. Thus it says, for example, that God taught Adam all the names and in this the exegetes see a reference to man's cognitive faculties.

But the Koran's repeated call for man to reflect on himself and on natural phenomena is an appeal to human reason. The Koran underlines that before God, only the righteous intention counts, which means that alongside reason, freedom is the highest good, allowing humans to act independently and make decisions, independently of their own activities and of everything that might cloud their vision.

In 270 pages, you sketch the image of man in the Koran. Could you summarise it in a sentence?

Khorchide: This is how I put it in the book: "The message of the Koran is unambiguously directed towards the change and development of humanity and the understanding of its religion, not towards stagnation or backwards movement."

This message doesn't appear to be quite that unambiguous, if we bring to mind the interpretation of the Koran by Salafists and other fundamentalists – and the Islamist extremists who find the legitimation for their violence in the Koran. You write that the Koran appeals to humans to "use their reason to keep reflecting critically on their path to God, and to tread it anew according to the context of their lives." How do you explain the fact that there are Muslim groups who see the Koran as a "rule book" for their life?

Khorchide: The Koran itself doesn't offer any kind of rule book. That's down to later attempts by some Muslims to develop a legal system out of Islam. There are Muslims who shut themselves off to any kind of reform, they argue that fundamentally, our understanding of Islam is complete – so why the need for reforms? Why bring it up to date? Why change?

They believe that by the 9th century at the latest, everything there was to say had been said and written down, so today we just need to look at the works of the old scholars and we'll find answers to the questions we have today. How is this argument any different from the argument of the opponents of all prophets, as quoted in the Koran: "Nay, we shall follow the ways of our fathers"? For many of the anti-reformists, it's more about maintaining positions of power or the threat of destabilising their identity and not really about a theological discourse.

A lot of authors have an imagined reader or a particular target audience in mind when they write. Is that the case for you?

Khorchide: I write my books for everyone with an interest in the subject - but above all for Muslims. Because in my view, we Muslims need to think much more openly about the question of how the Koran and Islam as a whole are to be understood today, to keep both of these current in our lives.

We need an objective, courageous debate within Islam – on the image of God and man in the Koran among other things. It's important for me in my most recent book, "God believes in humanity", to provide all Muslims who want to engage intellectually with their religion with a basis for reflection, for reading the sources and for discussion with each other.

Hence the large number of footnotes... 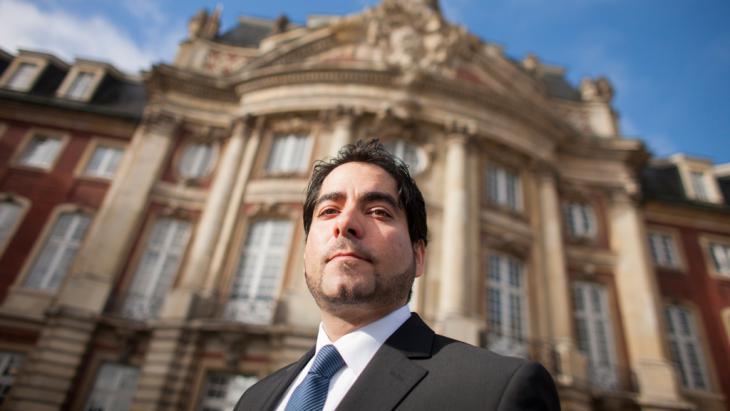 Mouhanad Khorchide (born 1971) is the head of Centre for Islamic Theology in Munster. Prior to that, he taught in Vienna. The Islamic Studies scholar is originally from Lebanon, though he lived in Saudi Arabia until he was 18 and then emigrated to Austria with his family

Khorchide: My book "Islam is Compassion" was criticised for citing hardly any sources. But that was the intention: the book was conceived as "popular non-fiction", to reach as broad an audience as possible. So I consciously avoided footnotes.

This time I have cited a lot of sources, because the link between the topics of "humanism" and religion is far from self-evident – on the contrary, making this link has been seen as provocation by many humanists, and by religious people. I see this book as opening a discussion with both parties and in it I try to build a bridge between humanism and Islam.

Islam is a real preoccupation at the moment for politicians and the general public, not least because the majority of refugees come from Syria, which is a Muslim country. Europeans seem to be afraid that these people are bringing with them an Islam that is not compatible with "our values".

Khorchide: I understand these people's concerns. They must be taken seriously. There is no sense in trivialising the problems. It depends on how we in Germany receive and approach these refugees; we have to integrate these people into society as quickly as possible. And that also means talking about values. But talking alone is not nearly enough.

We also have to live by the values we prize so highly, to set an example – we have to create spaces in which refugees can experience these values that hold our pluralistic society together. Values aren't imposed from above; they are picked up by individuals. For example, if we hold up human dignity as a non-negotiable value, then we cannot treat refugees in a way that removes their human dignity.

As regards how the people seeking refuge with us understand Islam: we still have no idea what they really think about Islam, and how they live according to it. There is much speculation, but no substantial investigations. Just because these people come from the Arab world doesn't mean they have a conservative understanding of Islam per se.

It could very well be that bad experiences with Islamic State have given them a desire for a different interpretation of Islam; it could also be that many of the refugees are secular, and don't define themselves as religious or feel a strong connection to Islam. We shouldn't generalise, or allow ourselves to be confused by politicians and scaremongers.

Germany's foreign policy is explicitly values-based. But what happens, Ralf Bosen asks, when democracy, the rule of law and human rights collide with the logic of trade and ... END_OF_DOCUMENT_TOKEN_TO_BE_REPLACED

Germany’s electorate includes some 7.4 million citizens with international roots, while many more millions of residents from abroad aren’t allowed to vote. Both groups are often ... END_OF_DOCUMENT_TOKEN_TO_BE_REPLACED

No other Western poet was arguably so well-versed in the Koran or so fascinated by Islam as Germany's national hero, Goethe. In a new publication that examines all Goethe's ... END_OF_DOCUMENT_TOKEN_TO_BE_REPLACED

Migrants are often maligned as being responsible for Europe's problems. Yet their integration is in Europe's interest. Michael Thaidigsmann believes that a long-term vision is ... END_OF_DOCUMENT_TOKEN_TO_BE_REPLACED

How could the Afghan government and its institutions collapse so quickly? That things were going wrong in Afghanistan had been obvious for a long time, yet the West preferred to ... END_OF_DOCUMENT_TOKEN_TO_BE_REPLACED

Shida Bazyar's new novel is the literary surprise of the year. It tackles the pressing issues of our time, and yet it is timeless. This is a story of friendship, marginalisation ... END_OF_DOCUMENT_TOKEN_TO_BE_REPLACED
Author:
Canan Topçu
Date:
Mail:
Send via mail

END_OF_DOCUMENT_TOKEN_TO_BE_REPLACED
Social media
and networks
Subscribe to our
newsletter