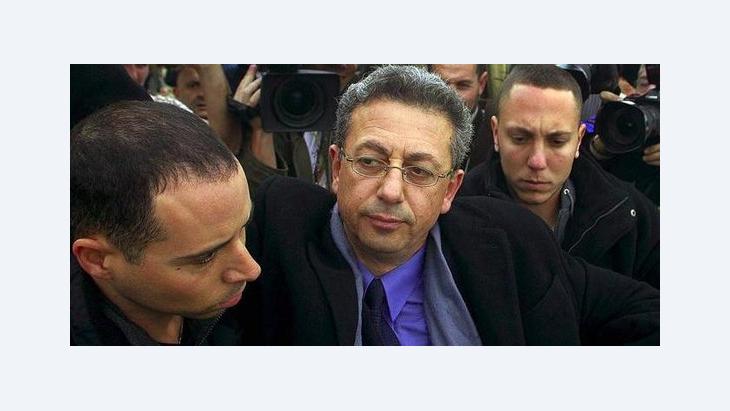 Interview with Mustafa Barghouti
''This Society Does Not Want Extremism''

Mr Barghouti, the impact of the Arab Spring is also being felt in the autonomous Palestinian territories – most evidently at the present time in the Hamas-controlled Gaza Strip. The Assad regime, long an ally of Hamas, has completely discredited itself politically and morally. It was this that led to the Hamas withdrawal from Damascus. How much of an influence do events in Syria have on Hamas?

Mustafa Barghouti: There is one positive aspect that I myself have also noticed in my dealings with Hamas. The success of the Arab Spring – particularly in countries such as Egypt and Tunisia – shows us just how potent a force non-violence can be. I have been an advocate of non-violence for more than ten years. During the last Hamas meeting in Cairo one could see that the organisation had changed its position and actually decided to take the path of non-violence. It seems to me that the changes in the Arab world have had quite a considerable influence in this respect.

Does this mean that Hamas is also changing in strategic and ideological terms? 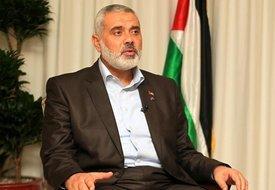 Turning his back on erstwhile allies: the former leader of the Hamas government, Ismail Haniyeh, recently praised the courage of the Syrian revolutionaries' attempts to topple President Assad

​​Barghouti: In my opinion it has definitely changed in regard to three points. Firstly, it has now accepted the two-state solution.

Secondly, it now accepts non-violence; it is adopting forms of civil resistance. This is something the organisation made very clear recently in Cairo. And thirdly – though we still have to see how serious it is on this point – it has accepted the idea of a democratic electoral system, though this, too, is a point that has not yet been put to the test.

But if we take it that Hamas really has accepted these three principles, then this will mean significant changes. For me, this is an encouraging sign, because it shows that currently something is happening.

Is this the view of everyone in Hamas?

Barghouti: No, definitely not. There are certainly many different opinions there. But it is these differences of opinion that reflect the reactions to the change. In my opinion, though, the majority will support the new course.

What do you see as the most urgent tasks to be undertaken in the coming months?

Barghouti: There are three issues upon which we now need to concentrate. First of all on a non-violent resistance for the benefit of Palestinian liberty in the struggle for freedom from occupation. Secondly, on achieving real democratic change. This is why we are firmly opposed to any consolidation of the internal division of Palestine. It is something that prevents Palestinian society from gaining experience in democratic processes. And thirdly, we advocate social justice. 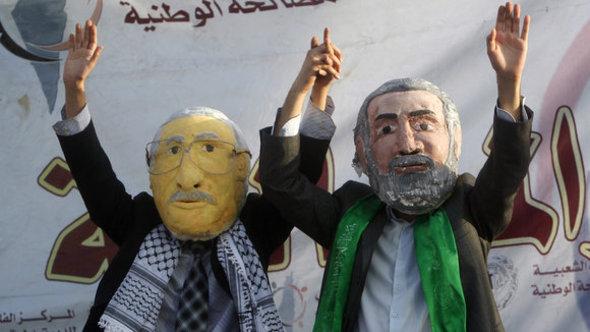 Speaking out in favour of dialogue and reconciliation: dressed as Mahmoud Abbas and Ismail Haniyeh, Palestinian demonstrators call on Fatah and Hamas to reach political agreement

​​We want to have social as well as political democracy. We believe that these three elements could provide the foundations upon which a free Palestinian society and state can be constructed.

You mentioned "social democracy". What does that mean?

Barghouti: For me, democracy is not only about political freedom, elections and maintaining a balance of power. The word also implies a certain degree of social justice and respect for the needs of the underprivileged. It is about helping women to achieve independence, and young people to develop their skills. The fair distribution of incomes is also something that needs to be discussed. Equal opportunities for everyone. The term also implies good education and health systems that are available to everyone.

The demonstrations by young Palestinians in recent months have shown that they have a great deal of sympathy with secular ideas. How do you view this development?

Barghouti: This society does not want extremism. The people are in favour of a balanced political system. At the same time, they are also very concerned by the lack of democracy, which is due mainly to the internal divisions within Palestine. They welcome the idea of a political system based on civil and secular ideals. 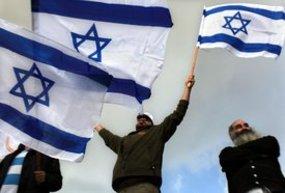 In December last year, Germany, Britain, France and Portugal condemned the Israeli settlement policy and the Jewish settler attacks on Palestinians. The construction of new settlements in the Palestinian territories, they said, sent out a "devastating" message

​​The fact that there is very little scope for democracy to grow due to the concentration of power in the executive authorities – in both the West Bank and Gaza – is something that they find very disturbing. It is a situation that has led many people to demand real democratic alternatives.

Palestinian-Israeli negotiations seem to be making little progress at the moment. Why?

Barghouti: Unfortunately in Israel at the present time there is a worrying shift towards the far right is taking place. The world's longest-running occupying regime can be described as an apartheid regime.

"Apartheid" is a strong word. Why do you say that?

Barghouti: It is apartheid because it involves a situation where two groups of people living in the same country have two different law systems applied to them.

This can only change if we change the parameters of the conflict. To do that, we will require non-violent resistance and a strong display of international solidarity. But it will also require cooperation with those among the Israelis who understand that our struggle is not only for the freedom of the Palestinians but also for the freedom of the Israeli people from this last colonial system.

Will the Arab Spring also influence the Israeli attitude towards the Palestinians?

Barghouti: Yes. The Israelis may be closing their eyes to this development at the moment, but they will have to acknowledge it eventually. The changes in the Arab world are so fundamental that it would be a big mistake on Israel's part were it to forget that the Palestinian-Israeli question is one that is crucial to all other relations in the region.

Mustafa Barghouti is a Palestinian politician, doctor and civil liberties campaigner. He lives in Ramallah. In 2002 he and the literary scholar Edward Said were among the founding members of the social democratic "Palestine National Initiative" which sees itself as providing a third way, between the options of Hamas and Fatah.

Home
Print
Newsletter
More on this topic
Interview with Mustafa Barghouti: Palestinians and the Path of Peaceful ResistanceIslamism and Politics in the Middle East: Is Hamas Reinventing Itself?Interview with the Jewish Palestinian Politician Ilan Halevi: With One Foot in the UN
Related Topics
Arab Spring, Arabellion, Democracy and civil society, Fatah, Freedom of the press, Hamas, Mahmoud Abbas, Middle East peace process, Palestinian Authority
All Topics

Asmaa al-Atawna's debut novel "Missing Picture" has been published in German translation (Keine Luft zum Atmen – Mein Weg in die Freiheit). In it, she describes life in Gaza from ... END_OF_DOCUMENT_TOKEN_TO_BE_REPLACED

At the end of every year, the team at Qantara.de gives you a run-down of the ten most-read articles on the site over the past 12 months. Here is a quick overview of the stories ... END_OF_DOCUMENT_TOKEN_TO_BE_REPLACED

Palestinian Christians are an integral part of the Palestinian national movement. This is the conclusion reached by the Chilean-born Palestinian political scientist Xavier Abu Eid ... END_OF_DOCUMENT_TOKEN_TO_BE_REPLACED

Jesus – Issa in Arabic – doesn’t merely enjoy the highest place among the prophets in the Koran. He is also revered in Islam’s mystical tradition for his message of love and mercy ... END_OF_DOCUMENT_TOKEN_TO_BE_REPLACED

With reported hostilities against Israeli journalists and the flag of the Palestinian territories flying on the streets and in the stadiums, it is clear the World Cup in Qatar is ... END_OF_DOCUMENT_TOKEN_TO_BE_REPLACED
Author:
Kersten Knipp
Date:
Mail:
Send via mail

END_OF_DOCUMENT_TOKEN_TO_BE_REPLACED
Social media
and networks
Subscribe to our
newsletter