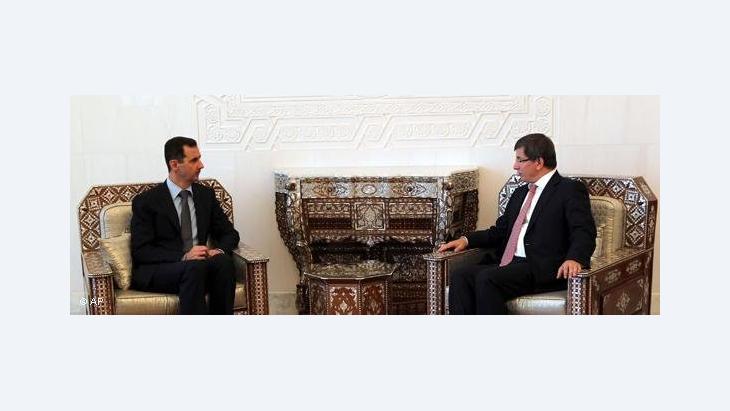 The visit by Turkish Foreign Minister Ahmet Davutoglu to Syria has shown that Turkey is attempting to increase pressure on the Assad regime. Abduljamil Mikhlafi spoke with Mustafa el-Labbad, an expert on Turkish-Arab relations, on the thinking behind the Turkish position with respect to the current uprising in Syria

The visit by the Turkish Foreign Minister to Syria was preceded by verbal confrontation and a "war of declarations" between both sides. How do you interpret these declarations?

Mustafa el-Labbad: They reflect deep tensions in Syrian-Turkish relations. Each side has a different viewpoint on the events in Syria. The regime there refuses to yield and instead suppresses the uprising, while Turkey regards the current upheaval as an expression of popular discontent and the start of a revolution. The mood in Turkey has since moved from mere sympathy to open support of the rebellion. This shows that the formerly excellent relationship between Syria and Turkey, which could even have been characterized as a sort of alliance, has now become clouded by a certain degree of disaffection. The Turkish side is increasingly turning away from Damascus and also applying pressure.

At the same time, Turkey does not wish to break its ties with Damascus. It wants to maintain sufficient leeway in order to influence Syrian decision makers with respect to the country's domestic affairs as well as Syria's relationships with other countries in the region. And it wants to maintain Syrian-Turkish relations.

Turkey has played host to two conferences by the Syrian opposition. In addition, leading figures in the Syrian Muslim Brotherhood have held a press conference in Ankara. Is Turkey trying to put pressure on Damascus by signalling that it holds trump cards in its hands?

Mustafa el-Labbad: I think that these conferences clearly took place under the auspices of the Turkish government and in coordination with the respective parties, especially the Muslim Brotherhood organization in Syria. This was more than just a message to Damascus. Turkey has hereby gone so far as to form a Syrian opposition group for the period following Assad's rule.

"More than just a message to Damascus": Turkey has played host to two conferences by the Syrian opposition. According to Mustafa el-Labbad, Turkey has hereby gone so far as to help form a Syrian opposition group for the period following Assad's rule

I am therefore of the opinion that these conferences are an indication that Turkey expects the situation in Syria can only escalate and assumes that the Syrian regime has simply run out of time. Now it is a matter of finding a suitable alternative.

The Muslim Brotherhood organization maintains very close relations with Turkey. Of course, Turkish interests don't only take ideological concerns into account, but also they consider the geographical situation and the geopolitical balance in the region. This is why Turkey is now replacing its former alliance with the Syrian regime with that of the Syrian opposition, in particular, with its most active group, namely, the Muslim Brotherhood movement.

So Ankara has therefore realized that Assad's end is near and now it is time to deal a new deck of cards with Syria's future political forces?

Mustafa el-Labbad: Exactly. For some time now, observers in Turkey have believed that the Syrian regime had reached an impasse and that Turkey, as a country that promotes democracy and human rights and sees itself as a friend of the Arab people, could not afford to lose the trust of ordinary Syrians and Arabs. By continuing to support the Syrian regime, Turkey's reputation among Arabs would suffer. This is the basic position. In addition, they don't want to completely lose Syria – the countries are historical neighbours with a long, common border. Syria also lies geographically between Turkey and the Arabian Peninsula, bestowing the country with enormous geopolitical significance.

What then can Turkey do if the Syrian regime clings to its current approach towards the protests?

Mustafa el-Labbad: Turkey will strengthen its demands on the Syrian regime, it will, as it has already done, set up camps to house Syrian refugees, and it also has the option of breaking ties with Syria. This would be a huge blow to the regime. Perhaps Turkey might partake in the international economic sanctions against Damascus, which are supposed to be intensified soon. In addition, it could agree to future measures against the Syrian regime, such as closing its borders to the country, resulting in further isolation for Syria. The only remaining ally to Syria would then be Iran, but Syria and Iran do not share a common border. Under these conditions, I think that Turkey holds far better cards than Syria. 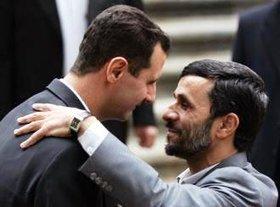 Let's dance: If Turkey broke ties with Damascus entirely, the only remaining ally to Syria would be Iran

​​On the other hand, one shouldn't underestimate the ability of the Syrian regime to maintain its grip on power and to play for time. It has been forced into a corner and is now playing its last cards. At the same time, Turkey will continue to apply pressure by assembling the Syrian opposition and offering it a gathering place and a framework to forge plans for a possible alternative to the Assad regime. Perhaps this might lead to international recognition of this alternative, a sort of government in exile.

Finally, it remains for the Syrian people themselves to set the pace of escalation and confrontation in Syrian-Turkish relations. The more acute the popular uprising becomes and the more successful its chances appear, the more isolated the regime will become. This in turn will lead to a greater crisis in relations.

Rumour now has it that Washington fears that events in Syria could escalate out of control and has therefore requested Turkey to increase the pressure on the Assad regime. Could one say that Turkey is engaged in something of a proxy war?

Mustafa el-Labbad: I think that this is somewhat exaggerated. As I already mentioned, Turkey has a long border with Syria. This means that the current situation is important in every respect for Turkey. In addition, this Turkish commitment with respect to Syria goes far beyond the dimension of the Turkish-Syrian relationship to include Turkish-Iranian relations – which have been marked by a historic rivalry for the leadership position in the region. In this regional competition between both countries, Syria has always been able to tip the scales one way or the other by maintaining good relations with both sides.

A regime change in Syria would therefore be a blow against Iran and alter the balance of power in the region. And this would be in the interest of the USA. That is why it is very sympathetic towards Turkey and its approach in dealing with Syria – both the USA and Turkey share common interests. I don't believe, however, that the USA has burdened Turkey with some special role. Instead, I am of the view that there is consensus between both countries in terms of what is going on in Syria and the role that Turkey is playing in response. Against this background, Turkey must certainly enjoy American support.

"Turkey could not afford to lose the trust of ordinary Syrians and Arabs," el Labbad says. Ankara has provided shelter for refugees from the violence in Syria. Estimates on the number of refugees range from 10,000 to 30,000

Would Ankara consider participation in a possible NATO military operation against Syria?

Mustafa el-Labbad: I don't believe that Turkey has any intention of carrying out military operations in Syria, as this would serve to further heighten tensions, lead to a security vacuum, and threaten the Turkish border. It is more likely in Turkey's interest to continue exercising diplomatic, political, and economic pressure on the Syrian regime and, parallel to this, that the popular insurrection in Syria grows. As I see events, discussion about Turkish participation in a military attack on Syria is premature and, at this point in time, is detrimental to the interests and designs of Turkey with respect to the future of Syria after the departure of Bashar al-Assad.

You have said that in terms of regional disputes, Syria's role has been that of tipping the scales in one way or another. It has the ability to play off the regional rivalry between Turkey and Iran and use it for its own interest. Would it be correct in saying that this role is now a thing of the past?

Mustafa el-Labbad: In fact, I think that this game is over and Syria now finds itself in a quite unenviable position. In the past, the regime was able to perform an elegant balancing act on a wire stretching over the entire Middle East. Now, it is completely in the grip of Iranian interests. This relationship renders Syria unable to manoeuvre and it is thereby difficult to improve its relations to non-Arab and even Arab parties. As such, the balancing act is over and the Syria regime appears more isolated in the region and internationally than ever before.

Mustafa el-Labbad, an expert on Turkish-Arab relations, is the Director of the Al Sharq Institute for Regional and Strategic Studies in Cairo and editor-in-chief of the magazine "Sharqnameh," which concentrates on developments in Iran, Turkey, and Central Asia.

Home
Print
Newsletter
More on this topic
The Turkish Role in the Middle East and Beyond: Moving Beyond the DichotomySyria: The Opposition and the Church: A Slap in the Face for the Pro-Democracy MovementTurkey and the ''Arab Spring'': The Turkish Chimera
Related Topics
Arab Spring, Arabellion, Democracy and civil society, Recep Tayyip Erdogan, Syrian Civil War
All Topics

Since Ali Khamenei, Iran's most powerful man, has openly and unconditionally come out in support of Putin's war in Ukraine, logistical help is on its way, with an allegedly ... END_OF_DOCUMENT_TOKEN_TO_BE_REPLACED

The Palestinian militant organisation Hamas, with Hezbollah's help, is building up a military presence in Lebanon, the ultimate consequences of which could be devastating, writes ... END_OF_DOCUMENT_TOKEN_TO_BE_REPLACED

In this essay, renowned Lebanese journalist and writer Hazem Saghieh asks whether the Arab Levant, which stretches from Iraq in the East to Egypt in the West, will remain an ... END_OF_DOCUMENT_TOKEN_TO_BE_REPLACED

Khaled Bahlawan hammers nails into a traditional wooden boat he built by hand, toiling under the scorching sun on Syria's Mediterranean coast to preserve a disappearing ancient ... END_OF_DOCUMENT_TOKEN_TO_BE_REPLACED

"Flugt" is the world's first museum dedicated to the stories of those forced to flee. The new museum, which focuses on the fates of refugees then and now, is housed in a former ... END_OF_DOCUMENT_TOKEN_TO_BE_REPLACED

"Finding Home", the second album by Syrian-born, UK-based musician Maya Youssef, works through feelings of loss and destruction until its music reaches a place beyond war and ... END_OF_DOCUMENT_TOKEN_TO_BE_REPLACED
Author:
Abduljamil Mikhlafi
Date:
Mail:
Send via mail

END_OF_DOCUMENT_TOKEN_TO_BE_REPLACED
Social media
and networks
Subscribe to our
newsletter