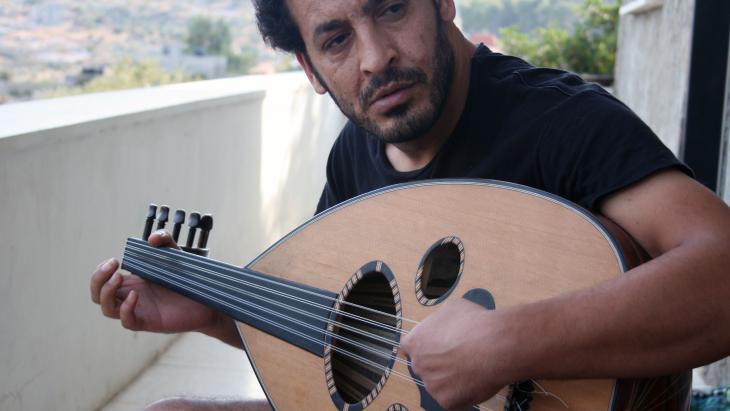 Based in Jenin refugee camp, the Freedom Theatre is one of the few Palestinian cultural institutions that has succeeded in making a name for itself abroad, touring from India to the United States. Ylenia Gostoli caught up with Nabil Al Raee, who directed the Freedom Theatre's first production in 2006 and has been involved ever since. Al Raee, from Al Arroub refugee camp near Hebron, discusses the company's new production and how it fits into the theatre's rich and controversial history of "cultural resistance"

Mr Al Raee, your new play is about the 39-day siege of the Church of the Nativity in Bethlehem during Israel's Operation Defensive Shield in 2002. How was the idea developed?

Nabil Al Raee: During a tour in Switzerland in 2011, Zoe Lafferty met someone who said he had been inside the church. He approached the team after the show. It's a story that is still alive, and the evidence of that are the exiled fighters who live abroad. I also have a personal connection with the story. I lived my childhood with two of them, they were from Arroub camp. I was very much interested to hear their stories because we didn't meet after what happened.

This will be your first tour of the UK. Why choose this play?

Al Raee: This story was badly presented to the British public. The media were talking about how a group of terrorists went to the Nativity Church in Bethlehem and took hostages from the church, until the international community interfered and tried to create a deal. First, the Nativity Church is in Palestine. The group of fighters were Palestinian. The Israelis came to invade Bethlehem, a Palestinian city, and decided to lock them in the church.

We want to discuss what happened, because people misunderstood history many times. History plays a big part in our lives. Is history written by people? I need to question that. And as a Palestinian, I have a perspective, I have been living under an unjust occupation for a long time. 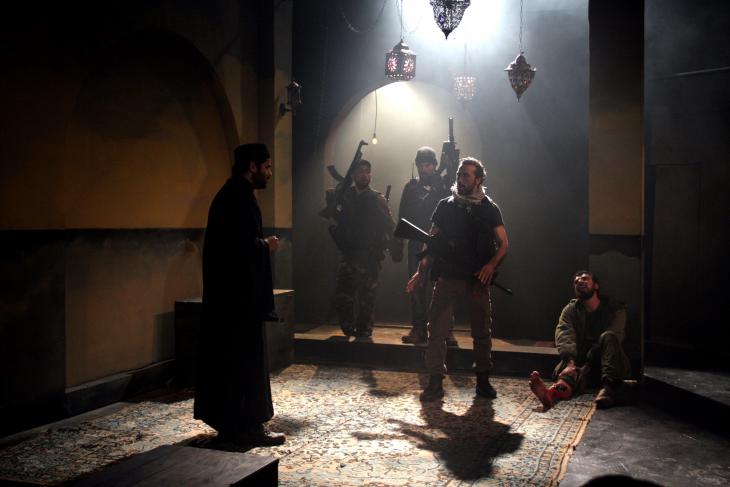 On 13 May 2015, the Freedom Theatre's first tour of the UK kicked off in Manchester. Their new production, "The Siege", written and directed by Palestinian Nabil Al-Raee and Briton Zoe Lafferty, opened in April in Jenin. Photo above: scene from the premier of "The Siege" in Jenin, 3 April 2015

Does being a registered NGO limit the scope of your work?

Al Raee: That's always the fear, but I'd say we are lucky. Because of our identity, whoever wants to deal with us knows that we are not a theatre doing art for art. In my personal opinion, we are a political theatre. I think we are in a process to one day, I hope, be able to get rid of all the funding because in many ways, it's a limitation.

Do you think of the Jenin refugee camp as your audience?

Al Raee: I think as a starting point yes, your audience is around you so you think about it. The Freedom Theatre has a history in the camp; it's a continuation of the Stone Theatre that was established there before. But the idea itself is bigger than a local community.

Relations between the Freedom Theatre and the community, known for its conservatism, have been strained at times. You've even received physical threats. Have things changed over the years? Do you feel that you have to compromise because of where you are?

Al Raee: It's a love-hate story. As a theatre, we have to read our environment. I don't think compromise is the right word, because you never want to compromise. You want to be smart yes, but not compromise. I am not here to please all the people. I am here to participate, to share with the people, but also to question them, to question their thinking and their way of living.

I am against victimising, but you need to analyse in order to understand. So yes you have a normal – or abnormal – reaction from people, but you have to factor it in. Not so long ago, Jenin refugee camp was attacked. In 2002, most of it was destroyed. The connection with anything new, foreign, was an Israeli soldier.

It's easy to say "let's move the theatre to the city". But what would be the point? This place, its nature, was created here. The story of the people who associate themselves with the theatre is here. 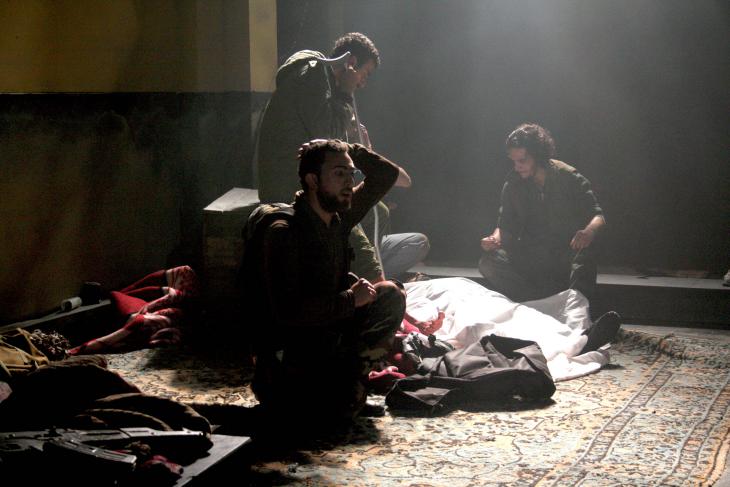 Before even seeing the play, some sections of the right-wing and pro-Israel press in the UK and the US started a polemic over the British government's contribution to the tour's funding, claiming it "promotes terrorism". Photo above: scene from the premier of "The Siege" in Jenin, 3 April 2015

Like the story of Juliano Mer Khamis. Born of a Jewish mother and Palestinian father, he once said he was "100 per cent Palestinian and 100 per cent Jewish". What is his legacy? Has the Freedom Theatre changed since his death?

Juliano was connected to the Stone Theatre, the Freedom Theatre, the establishment of the new idea of cultural resistance. I think that many things have been happening, but the most important thing is that the idea itself is growing.

When Juliano was murdered, a lot of anger came through the place. First, you don't know who did it. People were hurt so deep, we started to fight with each other; we didn't know where to direct this anger. Some of us started to blame each other. But most of us decided that we should continue. You start thinking that if you leave, you give a gift to the people who murdered him. The intention behind the murder is to close the freedom theatre, to shut down the idea starting from Juliano.

What idea do you believe they were trying to shut down, and why?

Al Raee: To be free in your mind is very dangerous. To free your mind from limits, to start saying no and question, it's a big deal.

Yes it was a difficult issue to put girls and boys on stage, but it wasn't that big a deal. People wanted to make a big deal of it, but it wasn't. Yes people can get to a level where they are angry, but not kill for that. Why did no one in the camp ask us to take our stuff and leave before? They could have done that and they did it many times with other organisations. I don't think the work of Juliano, on that level, killed him. I don't think a normal, angry guy wanted to kill this man.

Al Raee: Our statement is to say it's unknown.

Is the Freedom Theatre free?

Al Raee: We are saying the freedom of the individual comes at the first level, and then we can fight for collective freedom if we can. We are free, but we need more time to be more free.

Her grandparents are Jews – born in Tunisia and Algeria. Director Cleo Cohen has now broken the silence about this with a very personal debut. By Nadine Wojcik END_OF_DOCUMENT_TOKEN_TO_BE_REPLACED

Every year in December, the team at Qantara.de takes a look back at the articles that proved most popular with our readers. This year is no different. Here is a run-down of the ... END_OF_DOCUMENT_TOKEN_TO_BE_REPLACED

Christmas in Bethlehem is usually a festive and colourful season. This year, festivities in the Palestinian town are set to return – but the COVID-19 pandemic is still casting a ... END_OF_DOCUMENT_TOKEN_TO_BE_REPLACED

Haifa is known for being Israel’s exemplary model of relative harmony between Jewish and Palestinian citizens. Its unique "Holiday of Holidays" is a joyous, multicultural event ... END_OF_DOCUMENT_TOKEN_TO_BE_REPLACED

May 2021 saw a deadly flare-up in Israel-Hamas hostilities, with eruptions of extreme violence in several of Israel's 'mixed' cities. Two weeks later, a broad-spectrum governing ... END_OF_DOCUMENT_TOKEN_TO_BE_REPLACED

Ankara is seeking to improve its relations with several states in the Middle East – such as the United Arab Emirates, Egypt and Israel. There are several reasons for this. ... END_OF_DOCUMENT_TOKEN_TO_BE_REPLACED
Author:
Ylenia Gostoli
Date:
Mail:
Send via mail

END_OF_DOCUMENT_TOKEN_TO_BE_REPLACED
Social media
and networks
Subscribe to our
newsletter