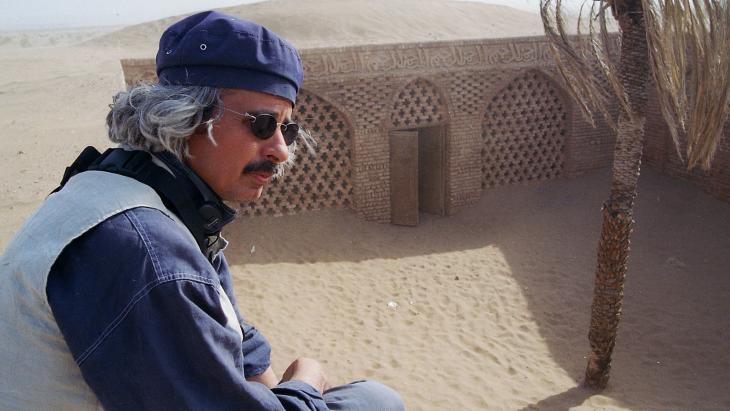 Islam as a Culture of Reconciliation

Tunisian film-maker and visual artist Nacer Khemir criticises the cultural inertia, which he feels was caused by decades of dictatorship, and the growing religious fervour gripping his country. He spoke to Christina Omlin

Mr Khemir, in your new film, you trace the footsteps of Muhyiddin Ibn 'Arabi, a great thirteenth-century Islamic theologian, philosopher, and poet. What motivated you to make this film?

Nacer Khemir: Looking for Muhyiddin is a film about the great mystic Sheikh Muhyiddin. The film is a quest for this man covering ten different countries. Along the way, viewers learn the most important aspects of the Islamic religion. Anyone who sees this film gets a very clear idea of what Islam is.

And what is the Islam of Ibn 'Arabi?

Khemir: The answer can be found in many little nuances. I have here one of his poems. It is a good reflection of his basic philosophical attitude:

"My heart is now capable of taking on all forms.
It is a pasture for gazelles and a monastery for monks,
a temple for idols, and the Kaaba for pilgrims.
It is the tables of the Torah, the book of the Koran,
it practices the religion of love wherever its caravans take it.
Love is my faith, my religion."

That is a pretty accurate explanation of Islam: it is about a little-known vision of Islam. Given all the confusion surrounding Islam, it was important to me to spread the thoughts of this sheikh. He brings clarity to this confusion. 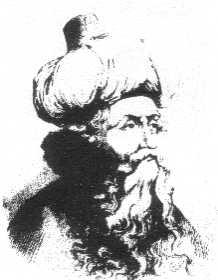 Revered as one of the greatest scholars of Sufi Islam, the theologian, philosopher and poet Ibn 'Arabi grew up in Seville and spent over 30 years of his life there. He died in Damascus in 1240

Could you be a little more precise?

Khemir: Let me give you an example: during a certain period, cleanliness, purity was a symbol of Islam. Today, we have the dirtiest streets in the world here in Tunisia. This is an illustration of the way a kind of perversion has taken place in the name of religion. Today, Islam is being held hostage in Tunisia by a kind of clerical class. The clerics are deforming Islam and, with it, life, turning it into something binary. Everything is either "haram" or "halal" – forbidden or allowed.

So far, I have only received positive feedback on the film. But Tunisian society is currently busy with something else. It is slightly deaf when it comes to culture and to Islam.

But there are lots of people in Tunisia for whom Islam is important.

Khemir: Under Ben Ali, the powers that be made sure that the souls of the Tunisians withered away. Yes, he made it possible for a few people to become materially wealthy, but most people suffered emotionally as a result of the spread of fear. This is why Tunisia now has highly educated people with exceptionally good academic qualifications; the human side, however, remains impoverished. They think that the truth can only be explained by science and that that is part of living in the modern age.

The humanities are being pushed aside; philosophy, literature, the arts ... none of that has any meaning for them. The prevailing vision of the world is a mechanical one, a technical one. If we were to describe the situation using a musical scale, we would say that these people are living in a system made up of no more than two or three notes.

So the dictatorship left behind a kind of emptiness ...

Khemir: Two kind of emptiness, in fact: on the one hand there is the emptiness I mentioned; then there is the alarm caused by the complexity of this world. But instead of facing this challenge, people stop thinking and instead line up behind someone who does the thinking for them, for example a party or a preacher. They just give up and are quite simply cowardly. Cowardliness coupled with ignorance – that is a mixture that can make people do the most horrific things in the name of truth. 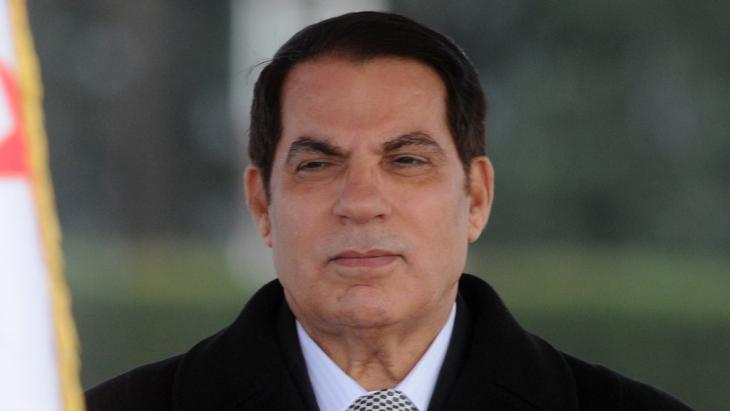 "Under Ben Ali," says Nacer Khemir, "the powers that be made sure that the souls of the Tunisians withered away. Yes, he made it possible for a few people to become materially wealthy, but most people suffered emotionally as a result of the spread of fear"

But where did all the knowledge about the values of this Islam go? There used to be a rich university tradition. The University of Ez-Zitouna in Tunis in particular has a reputation to defend.

Khemir: The universities have largely adopted Western culture without questioning Arab culture and renewing it. A profound analysis of Arab culture – i.e. what should be preserved and what can safely be abandoned – never got underway. Some want things to go back to the way they were, they want to return to our ancestors, they don't want to move; I am talking here about the Salafists. The others don't want anything to do with all that; they just want the modern age, science, and technology; I am talking here about the secularists.

Basically, it is not a religious problem, but a cultural one. It is a kind of refusal to accept that the world is currently going through radical change and that there is something to lose. And because it has not been possible to provide an intellectual answer to these problems, people have erected religious barricades. That is a huge mistake.

In addition, very few Tunisians who studied abroad have returned to their country. The act of confronting ourselves with the West would have taught us to take a new look at Islam.

And why did no one ever take this new look at Islam?

Khemir: Because there was no basis on which to begin the research. No-one funded it, although there are plenty of petro-millionaires in the Arab world. There isn't even a historical dictionary of the Arabic language. I often say that if hope is a measure of the work that we still have to do, we must be the most hopeful people in the world because we still have so much work ahead of us. 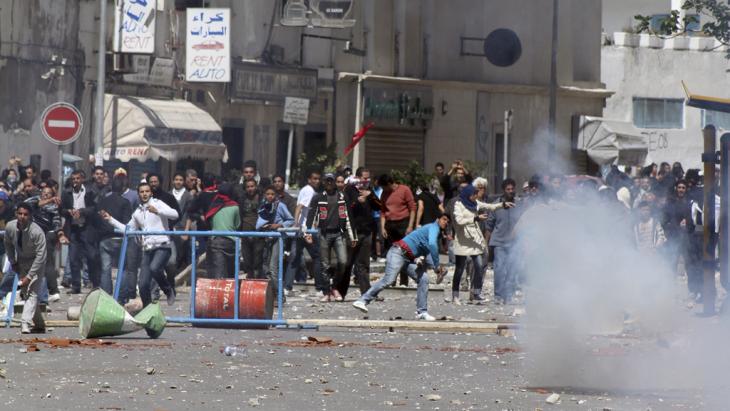 Generation without prospects: since the Tunisian revolution in January 2011, which led to the overthrow of the long-serving dictator Zine El Abidine Ben Ali, this north African country has known no peace. In particular, it is the young people who are suffering from the poverty and the high level of unemployment and who are taking to the streets to protest against the social misery in the country

For over 50 years, there has been no place in Tunisia for a culture that is more than just a copy or a print, but an art that has the vision to find answers where logic ends or where reason finds no solution. In Tunisia, culture is celebrated above all as a spectacle, a party, pure entertainment. Every little village has its own festival; compared with that, the production of high-quality culture is relatively small. Although the country has a rich cultural heritage, we aren't familiar with our writers, calligraphers, and architects. With this anonymity, culture is digging its own grave. We don't know our own heritage.

You are painting a very bleak image of culture in your country ...

Khemir: The absence of quality and excellence is visible everywhere. But excellence is a challenge, and a challenge in turn requires precision. But we are constantly trying to somehow come to terms with the situation. For years, we have always found ways and means of sidling out of our responsibility, of zigzagging along. But how will we ever be free if we don't assume responsibility? There is no freedom without responsibility. Instead we have mutually educated each other in irresponsibility and quietly accepted the status quo. Society is gradually sliding into a kind of swamp from which it will not be able to extricate itself of its own accord.

What difficulties does the younger generation in Tunisia face?

Khemir: We have a young generation without an identity, without roots, a free-floating generation. Everyone can tell me about their iPad, everyone is surfing along the surface, talking about the latest inventions as if we were living in an American city. But we are in Tunis.

What really worries me is the hatred that is taking root everywhere: the Islamists' hatred of the West; the left wing's hatred of the Islamists. It is as if hate is at present the only motor that will propel us forward even a little.

My film is about the very opposite: it is calming and satisfying. It shows Islam as a culture of reconciliation, as a reconciliation with oneself and with others. And it shows that people have to work to develop an understanding of each other.

Business in the Moroccan city of Tangiers is booming due to its location at the nexus of global trade routes. But many locals are failing to reap the benefits. What they crave ... END_OF_DOCUMENT_TOKEN_TO_BE_REPLACED

Morocco and the European Union are at cross purposes when it comes to the Western Sahara. And, as Germany does not support Moroccan claims to the territory, a major conflict has ... END_OF_DOCUMENT_TOKEN_TO_BE_REPLACED

Recep Tayyip Erdogan, disappointed by the European Union’s reluctance to integrate Turkey into its ranks, has re-directed his country’s diplomacy toward the Maghreb and Africa to ... END_OF_DOCUMENT_TOKEN_TO_BE_REPLACED

Using a graphic novel to address a contentious issue like the Algerian war of independence may seem an odd choice, but new release "Algeriennes", translated into English by Ivanka ... END_OF_DOCUMENT_TOKEN_TO_BE_REPLACED

Although a unity government was formed in Libya in March 2021, tensions and possible crises between the political actors are already emerging. What problems does the country face ... END_OF_DOCUMENT_TOKEN_TO_BE_REPLACED

END_OF_DOCUMENT_TOKEN_TO_BE_REPLACED
Social media
and networks
Subscribe to our
newsletter