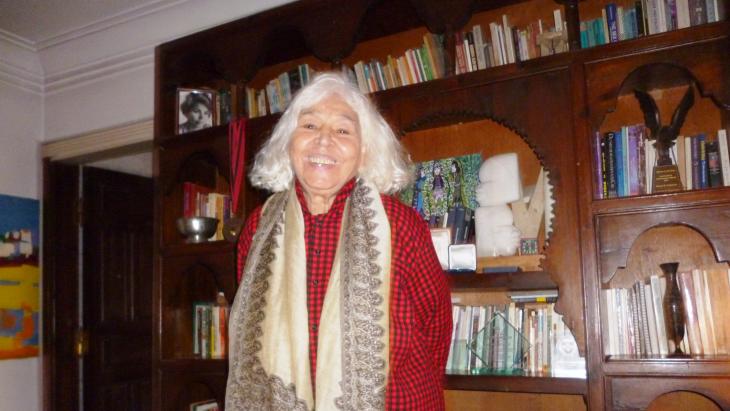 The spirited Egyptian author and feminist Nawal El Saadawi is not afraid of castigating the hypocrisy of the political system and the continued violations of women's rights in her country. Arian Fariborz spoke to her in Cairo

Ms Saadawi, do you see yourself primarily as a writer or as a political campaigner for women's rights?

Nawal El Saadawi: I don't like the word "political". I hate politics! It's a dirty game. I see myself as a creative writer, because I write novels and plays as well as scholarly treatises, both fiction and non-fiction.

You embarked on a writing career in the late 1960s. Milestones in your literary and scholarly work thus far include books such as "Women and Sex" and "The Hidden Face of Eve". How do you explain your continued success today, not only in Egypt but all over the world?

El Saadawi: Are you asking me why books by talented writers sell well? Well, because it's good literature! Because the writing is creative, scholarly, unique and authentic. Because it is something that comes equally from the heart and the mind – something that stems from experience and not only from book learning. My fiction and my studies are about real life; they are original, creative and sincere. That's why people like them. That is completely normal.

You were once accused of being a handmaid for Western interests ...

El Saadawi: Yes, they claimed that through my literature, I sought to serve Western interests, which is absolutely absurd. It was the fundamentalist groups that began to distort the image of creative writers and to denounce them publicly. They did this not only with me but with all independent writers who were not the devoted servants of Sadat or Mubarak or Morsi. To be truly independent, I have had to pay a high price in my life – my professional employment, my income, my reputation. 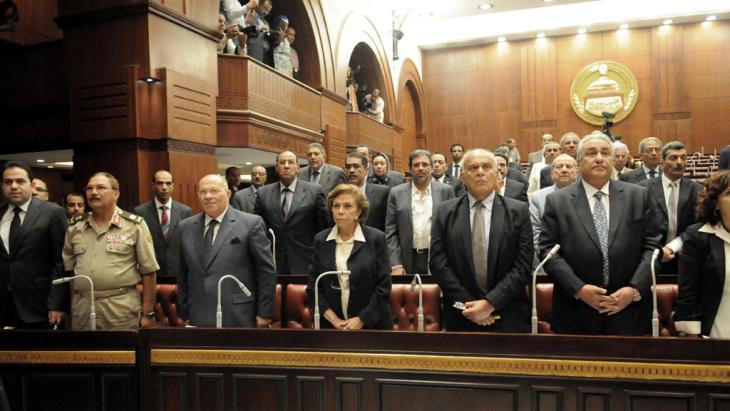 In April 2012, a court in Egypt suspended the 100-member constituent assembly on the grounds that it did not reflect the diversity of Egyptian society. A new assembly, which was responsible for amending the constitution that had been suspended in 2012, was appointed in the autumn of 2013. According to Nawal El Saadawi, the new assembly was hardly more representative of Egyptian society than the previous one

You have experienced persecution on a number of occasions: in 1981, when President Sadat was in office, you were arrested; in the 1990s, your name was on the death lists of Islamic zealots; and in 2002, you were accused of apostasy. How have you managed to persevere with your work despite all the political adversity?

El Saadawi: I would probably have been imprisoned during the rule of Gamal Abdel Nasser too – under all presidents and governments, in fact. I am also censored in the West. The reason can be found in the capitalist, religious and patriarchal system, regardless of whether it has Islamic, Christian, Jewish or Buddhist characteristics. I am against this system at both local and global level. This is also the reason why I am continually attacked – in Egypt as well as in Europe. I am not welcome in the West. I am welcomed by a few forward-thinking people who are likewise opposed to the patriarchy, to capitalism, neoliberalism and militarism. These are also the people who appreciate my literature. The vast majority, however, believe in the capitalist system.

Charges of apostasy were brought not only against you, but also against your daughter. How did this come about?

El Saadawi: I think there have been a total of five court cases against me. Because of my play "God Resigns in the Summit Meeting" they even wanted to take away my citizenship in the 1990s. I had to leave Egypt and lived in exile for three years in Atlanta (Georgia, USA). In 2002, I was accused of apostasy and was to be forcibly divorced from my husband. A few years later, my daughter, Mona Helmy, who is also a very gifted feminist and writer and who was writing at the time for the Egyptian weekly magazine "Rose al-Youssef", was also charged with apostasy. She had dared to use the name of her mother and her father at the end of an article in the magazine. But children are only permitted to use the name of their father and not their mother. She justified her act by saying that she and her mother have a right to use the name. Proceedings were then initiated against her.

My daughter triggered a wave of solidarity in Egypt with her campaign for the respect of the mother's name. She created a movement, which was urgently necessary, because mothers have hardly any rights in Egypt. A husband can live 30 or 40 years with his wife, have children with her and then send her the divorce papers by post. He can even divorce her without her knowledge. The law permits this.

I'm a psychiatrist, and mothers between 60 and 70 years old sometimes come to me after sacrificing their entire lives to their family – their "blessed" family and their husband – only to find that they have been divorced without their knowledge and that their husband is now married to a woman 40 or 50 years their junior. Their children are by now also married and never come to visit. These women come to me with severe depression and many other mental illnesses.

Has your daughter's women's rights campaign been successful despite the suit against her?

El Saadawi: Yes, and it is owing to pressure from her campaign that the government found itself compelled to amend the Child Protection Act in 2008. In view of three million illegitimate children, this change was urgently needed, because many of the mothers of these children were victims of rape.

Just imagine: the children were not allowed to take their mother's name, the father was unknown, and as a result, the child could not get a birth certificate or go to school. Now this is possible, which was a great victory for us. We celebrated another major triumph that same year with the prohibition of female genital mutilation. So there are positive developments now and then that given me a great deal of strength. 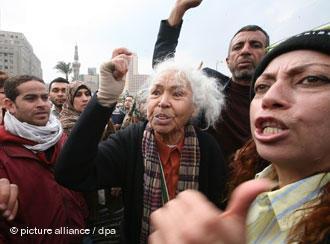 Raising her voice for freedom, political self-determination and gender equality before the law: Nawal El Saadawi protesting against the Mubarak regime on Tahrir Square in Cairo on 7 February 2011

Is the oppression of women in Egypt due primarily to the tradition of the patriarchal system or is it attributable instead to religious factors?

El Saadawi: No, it is slavery! The oppression of women in Egypt cannot be traced to traditions, Islam and fundamentalism, but rather to the slavery system – a system of the patriarchal class society that is supported by the religions. I have studied the history of the slavery era.

Look: in ancient Egypt, 7,000 years ago, we had goddesses: Isis was the goddess of wisdom and not of reproduction! And then there was Maat, the goddess of justice. What then happened historically was that women were robbed of their previous status. In Christianity and Judaism, they had Eve, who represented sin, and Islam later inherited that story. There are many people today who say that the Islamic religion oppresses women. I say to them: no, it's Christianity and Judaism. Islam merely adopted this practice.

I spent ten years comparing the Old and New Testaments with the Koran – they are very similar; the differences are minimal. So we can say that the root of the oppression of women lies in the global post-modern capitalist system, which is supported by religious fundamentalism. This is because they need a god to justify oppression, their political hypocrisy, colonialism and the killing of people. How can the invasion of Palestine or Iraq be justified?! How can it be that today, 50 per cent of Egyptian people live below the poverty line while two percent have billions of dollars? How can we justify this? You need God in order to justify it.

How do you assess the new Egyptian constitution with regard to the equality of women and the rights of religious minorities?

El Saadawi: It is all political hypocrisy! The 50 people who made up the Constituent Assembly were all government representatives, politicians paid by the government. Among them were also members of the Salafists, one of the most backward-looking of all the Islamic groups, even more retrograde than the Muslim Brotherhood.

Article 2 of the constitution states that Islam is the religion of Egypt. But what does that mean exactly? Is Egypt a religious state? No, they say, Egypt is a secular state. This constitution is full of contradictions and the few positive aspects that there are are nothing but ink on a page.

Many people have asked me why I was not part of this Constituent Assembly. And it's true: how can it be that the government forms an assembly after the revolution and does not invite us women and people from civil society to be part of it? One look at the women in the assembly is enough to determine that they previously worked for Mubarak. They don't want us! They don't want any really courageous people who are ready to stand up for what they believe in. They know that I write and that I can go to jail for it. That's why they tell themselves: Okay, better leave her alone!

Sisi’s mismanagement has plunged the country into crisis. Both political and economic reform is needed to save it, writes Abdelrahman Mansour END_OF_DOCUMENT_TOKEN_TO_BE_REPLACED

The devaluation of the Egyptian pound combined with rising food prices is taking its toll on Egypt. More and more people are slipping into poverty. Karim El-Gawhary reports from ... END_OF_DOCUMENT_TOKEN_TO_BE_REPLACED

Egyptian Sufis have been on the defensive against the country's Islamists for decades. Meanwhile, interest in mysticism is growing among the young members of Cairo’s middle and ... END_OF_DOCUMENT_TOKEN_TO_BE_REPLACED

Abortions are illegal in Egypt unless they are necessary to save a married woman's life. But that doesn't stop local women from having one. Egyptian society needs to acknowledge ... END_OF_DOCUMENT_TOKEN_TO_BE_REPLACED

Food prices doubled, salaries halved, banks restricting withdrawals: Egyptians now have the same problems as the Lebanese. But if things get worse here, the fallout will be far ... END_OF_DOCUMENT_TOKEN_TO_BE_REPLACED

END_OF_DOCUMENT_TOKEN_TO_BE_REPLACED
Social media
and networks
Subscribe to our
newsletter