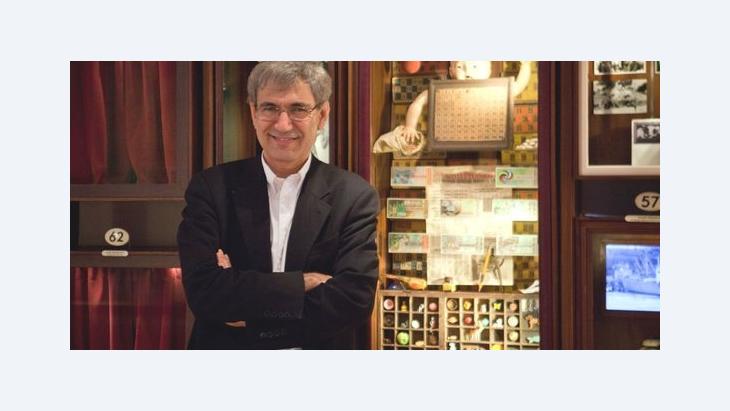 Orhan Pamuk is Turkey's most famous writer. In 2006 he also became the first ever Turkish writer to be awarded the Nobel Prize. He recently presented a very special museum to his home city of Istanbul. An interview by Aygül Cizmecioglu

Your novel "The Museum of Innocence" was published in 2008. Which came first – the idea for the book or for the museum?

Orhan Pamuk: The two ideas evolved together. It was not a case of my having written a successful book and then deciding to turn it into a museum.

​​My country has been shaped by Islamic values and by its own traditions, but at the same time there is a great yearning for what the West has to offer. Such contradictory attitudes, even nowadays, are what Turkey is all about.

Is this something you are critical of?

Orhan Pamuk: No, I don't make any moral judgements. I simply look on and take notes. This contradictoriness is something one particularly notices among the upper classes in Turkey. They like to have their Western status symbols, to show how modern they are, while at the same time venerating their glorious sultans from the Ottoman period. It is the sort of inconsistent behaviour that for me as a writer is fascinating.

You fell foul of the authorities in 2005 because of statements you made on the Armenian conflict. To what extent has your relationship with Turkey changed since then?

Orhan Pamuk: Of course there was immense political pressure put on me at that time. I took up a position as a visiting professor in the US and returned only occasionally to Turkey. And when I did go back I needed to have personal security. It wasn't a very pleasant experience. At the same time, however, I came to realise just how important the idea of the museum had become for me. I wanted to create a place of remembrance – a place for myself and for my home city Istanbul.

The "Museum of Innocence" is also a declaration of love to your home city. I don't think there is anyone who describes the melancholy of that city in quite the way you do. Why do you think this is?

Orhan Pamuk: Because it is where I was born and brought up. I can't help but smile when I hear myself referred to in the Western media as an "Istanbul writer". Really, all I do is to write about those things that have been around me all my life and that I know best. And that is Istanbul.

All eyes in Turkey are on a court hearing scheduled for January 30 into a child abuse case that allegedly occurred with the knowledge of one of Istanbul's most powerful Islamic ... END_OF_DOCUMENT_TOKEN_TO_BE_REPLACED

Any reconciliation between Turkey and Syria’s Assad regime would have disastrous consequences for many Syrians, explains Syria expert Kristin Helberg END_OF_DOCUMENT_TOKEN_TO_BE_REPLACED

The poetry of Pir Sultan once prompted uprisings in the Ottoman Empire. To this day, Alevis identify with him. Rainer Hermann visited Mehmet Celebi, a direct descendant of the ... END_OF_DOCUMENT_TOKEN_TO_BE_REPLACED

There are signs of an imminent normalisation of relations between Turkey and Syria. This would allow Erdogan to score political points domestically before the upcoming elections ... END_OF_DOCUMENT_TOKEN_TO_BE_REPLACED

Turkey will mark the centenary of the proclamation of the Turkish republic in October. But 2023 will be an important year in another respect too: Turks will go to the polls in ... END_OF_DOCUMENT_TOKEN_TO_BE_REPLACED

In 1925, Mustafa Kemal Atatürk had the Sufi orders shut down. In modern-day Konya, the city council uses whirling dervishes in its marketing campaigns. Marian Brehmer on Islamic ... END_OF_DOCUMENT_TOKEN_TO_BE_REPLACED

Comments for this article: ''The Museum of Innocence'' – A Declaration of Love to the City of Istanbul

Hi, I have just finished

Hi, I have just finished reading this book and I am impressed. Moreover, the real museum adds to this story essence of reality, I like it.
Orphan Pamuk is a great writer. Thank you for experience.

END_OF_DOCUMENT_TOKEN_TO_BE_REPLACED
Social media
and networks
Subscribe to our
newsletter