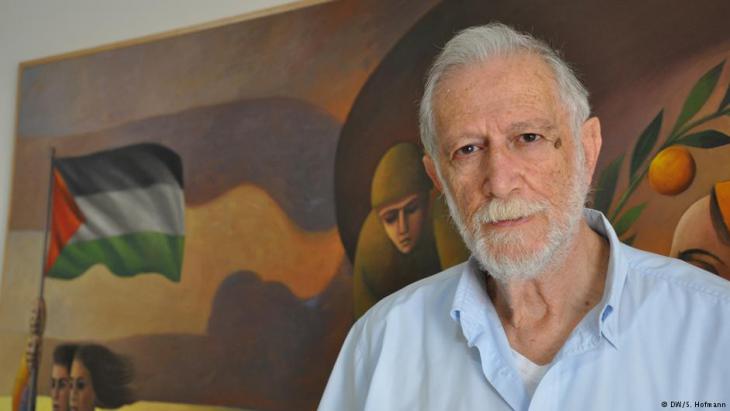 Palestinian Sliman Mansour is known as the "artist of the Intifada". Sarah Judith Hofmann spoke to him about 70 years of Israel, the daily passing of checkpoints and the symbolism of the dove of peace

On 14 May 1948, the State of Israel was declared. Palestinians commemorate the next day, 15 May, as the day of Nakba, the "catastrophe". How do you feel about that now, 70 years later?

Sliman Mansour: I am sad all the time – not just now. Sad, sometimes angry, sometimes confused, because when you hear the Europeans and the Americans talking about human rights and you look at our situation here, which they do nothing to help change, or even worse, they support Israel, it's confusing.

How would you describe your situation as a Palestinian today? For example, in Jerusalem where you live?

Mansour: In Jerusalem, I feel there is a kind of war against the Palestinians. It's a covert war, not an obvious one with aeroplanes. You always have the feeling you are breaking some law, but you don't know what you are doing wrong. You constantly feel threatened. You are not free. I don't like Jerusalem, anyway. It's a place for tourists. If you go to the old city, everything is just souvenirs or restaurants. It's not vital like it used to be. If I could choose, I would rather live in Ramallah or Birzeit [both in the West Bank]. But I have to live in Jerusalem to keep my ID. So, as a Palestinian, you have to live in a place where you don't feel safe, you don't feel free and that you don't like, just to keep your identity card.

The so called "Jerusalem ID" grants permanent residency to Jerusalemites who were born there or already lived in the city before 1967. It doesn't give you Israeli citizenship, but you can travel to Israel and abroad with it. As long as you continue living there… 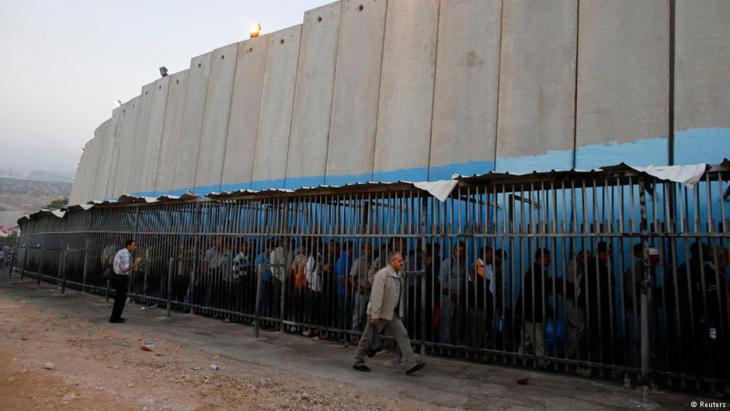 From checkpoint to checkpoint: "Everything is complicated here. They want to complicate our lives to the extent that we finally give up and leave. That's why Iʹll never leave, no matter what happens," says Sliman Mansour

Mansour: With the Jerusalem ID, I have some benefits. I can go to the Israeli cities of Jaffa and Haifa, to wherever I want. Were I to lose this status, I would be a nobody. I couldn't go to Europe, not even to Jordan, nowhere.  Even living in Ramallah would be against the law. Everything is complicated here. They want to complicate our lives to the extent that we finally give up and leave. That's why Iʹll never leave, no matter what happens.

You were born in 1947 in Birzeit, not far from Ramallah. What did your parents tell you about 1948?

Mansour: My father and my grandfather died when I was three years old. My father from cancer, my grandfather out of grief from his son's death. We six children were left with my mother. She spent all her time working, sewing clothes to make a living for us. She didn't have the time to talk to us.

So, how did you learn about the history of Palestine?

Mansour: For a long time I didn't know much. We were under Jordanian rule and they taught us as children that we were Jordanian: the Jordanian flag is our flag, Jordanian King Hussein is our king. It was brain-washing

When I became a teenager, I started to read the newspaper and I became a fan of Gamal Abdel Nasser [the pan-Arab nationalist and president of Egypt from 1956-1979]. School friends also told me things. And then after the occupation happened…

…in 1967, you mean, after the Six-Day War, in which Israel conquered the east of Jerusalem and the territory that is now known as the Westbank…

Mansour: Yes, after '67. I met Palestinians from Israel and everyone had their own sad story. It affected me a lot. When I was studying art at the Bezalel Academy of Arts and Design in Jerusalem, they wanted to teach me abstract expression, the trend at the time. I didn't want to, I wanted to paint more realistic things from life.

Hamas in Gaza, the Palestinian Authority in the West Bank, and Israel: Palestinians have fewer and fewer rights, says Khaled Elgindy. The Middle East could escalate at any time. ... END_OF_DOCUMENT_TOKEN_TO_BE_REPLACED

Joe Biden promised to make democracy and human rights central to US foreign policy. But that means not insisting on Israel's right to defend itself without mentioning its ... END_OF_DOCUMENT_TOKEN_TO_BE_REPLACED

As the Biden administration attempts to promote democracy and human rights in the Middle East, it will confront the deep-seated belief among Arabs that U.S. policies are unfair to ... END_OF_DOCUMENT_TOKEN_TO_BE_REPLACED

Ben Aylon’s debut international album sees him elevate the traditional music and instruments of Senegal and Mali into a fresh contemporary setting. Seven years in the making, " ... END_OF_DOCUMENT_TOKEN_TO_BE_REPLACED

Years ago, the International Holocaust Remembrance Alliance formulated how hatred of Jews can be recognised. Now a new definition is causing controversy. By Sarah Judith Hofmann END_OF_DOCUMENT_TOKEN_TO_BE_REPLACED

When it comes to talent, Palestine may well be able to compete with other football teams in the region, but growth and development are hampered by the situation in the Palestinian ... END_OF_DOCUMENT_TOKEN_TO_BE_REPLACED
Author:
Sarah Judith Hofmann
Date:
Mail:
Send via mail

END_OF_DOCUMENT_TOKEN_TO_BE_REPLACED
Social media
and networks
Subscribe to our
newsletter