Are your wife and children still in Gaza?

Abu Saif: Yes, I will bring them to Ramallah after Ramadan, but I will continue to visit Gaza.

How do you see your role as minister in the new Palestinian cabinet, among Fatah politicians like Prime Minister Shtayyeh?

Abu Saif: I am one of three new cabinet members under 50, which means I represent the younger generation in this government. The formation of the cabinet was a complicated business, taking place as it did after the collapse of the unity agreement with Hamas, and the imposition of U.S. and Israeli sanctions against the Palestinian Authority. On top of that we have the Trump deal to look forward to. For all of this you need a political government, made up not just technocrats, but of ministers with political opinions.

Nothing has weakened the Palestinians more than the political schism: Fatah in the West Bank, Hamas in Gaza. Would it not be much better to present a united front during these critical times?

Abu Saif: For Hamas the schism represents a convenient means of remaining in power, which it seized by force in 2006. I am not saying that Fatah is innocent in all this. After the failing of all the Islamists in Egypt, Tunisia, Libya, however, all that remains for the Muslim Brotherhood is Gaza. For Hamas, their offspring, that is more important than the national dream. 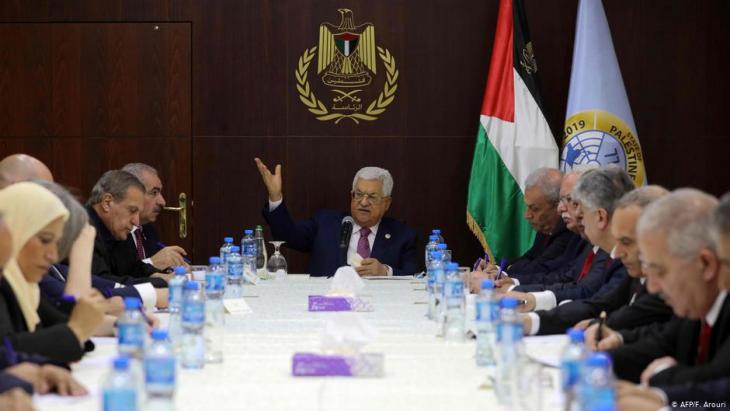 Deep political rift: the cabinet of the new Palestinian Prime Minister Mohammed Shtayyeh was sworn in in Ramallah in mid-April. Most of the more than 20 ministers are members of Fatah and allies of Palestinian President Mahmoud Abbas. Other parties, such as the People's Front for the Liberation of Palestine, opposed government participation. They call for a unity government with the radical Islamic Hamas, which has controlled the Gaza Strip since 2007. Hamas criticised the formation of the new government and accused Fatah of seizing power

Isnʹt President Abbas also partly responsible for the misery in Gaza? After all, his cuts in financial aid has hit the population far harder than Hamas...

Abu Saif: We began curbing these measures back in December. But then Israel withheld some of the taxpayers' money we were entitled to, which we resisted by refusing to accept the balance. Apart from that, if Hamas controls Gaza, it must also assume government responsibility. It cannot be that we level the roads or build a hospital and then Ismael Haniya comes along as the highest Hamas representative and cuts the ribbon. We are not giving up on Gaza, these are our people. But we do not want to finance the Hamas regime.

The U.S. administration is to present its peace plan in June – Donald Trumpʹs so-called deal of the century. From what we can gather, it will not include a Palestinian state. How will the Palestinian Authority react to that?

Abu Saif: That is a decision for Abbas. But even Trump will not change our basic principle: We Palestinians will not disappear from this country. Ultimately, the Israelis must decide whether they want to make peace with us. Otherwise they have no long-term future here. Look, my family has lived in Jaffa for over a thousand years. I know all my ancestors by name. I am prepared to accept that Jaffa belongs to Israel as long as we have Gaza and the West Bank. The Netanyahu government rejects that. What do you expect from me? That I give up more? We have given up almost eighty percent of our old homeland. And now we should also share the remaining percent? No! That makes no sense.

What has your government to offer the younger generation? Many young people in the West Bank and even more so in Gaza would leave tomorrow if they could. They donʹt believe in the old dream of a Palestinian state like their parents did. They just want a normal life.

Abu Saif: I donʹt have an easy answer. If the younger generation gives up, our cause will be lost. We have to create new hope. But we live under occupation. Whether we can create jobs depends on Israel. There is one thing we can do, however: respect freedom of expression. We need policies that are citizen-oriented and transparent. Prime Minister Shtayyeh committed himself to that. No Palestinian should be arrested for expressing an opinion. I stand by that too.

Jordan is not only waging a vigorous battle against coronavirus, but also against the Middle East peace plan proposed by U.S. President Donald Trump. By Birgit Svensson END_OF_DOCUMENT_TOKEN_TO_BE_REPLACED

The anti-Israeli Quds Day did not take place this year – a first both for Iran and Lebanon's Hezbollah. While Hezbollah leader Nasrallah sees his organisation in a state of siege ... END_OF_DOCUMENT_TOKEN_TO_BE_REPLACED

The corona crisis has led to an upswing for the Palestinian textile industry, but has done little to relieve the dire straits in the territories. Without international support, ... END_OF_DOCUMENT_TOKEN_TO_BE_REPLACED

According to the latest Reuters tally, more than 2.54 million people are now reported to have been infected by the novel coronavirus globally and 177,004 have died. As Muslims ... END_OF_DOCUMENT_TOKEN_TO_BE_REPLACED

Around the Islamic world, lockdowns and curfews are being extended and religious ceremonies are being cancelled outright in the hope of slowing the spread of COVID-19. Here’s the ... END_OF_DOCUMENT_TOKEN_TO_BE_REPLACED
Author:
Inge Günther
Date:
Mail:
Send via mail

END_OF_DOCUMENT_TOKEN_TO_BE_REPLACED
Social media
and networks
Subscribe to our
newsletter