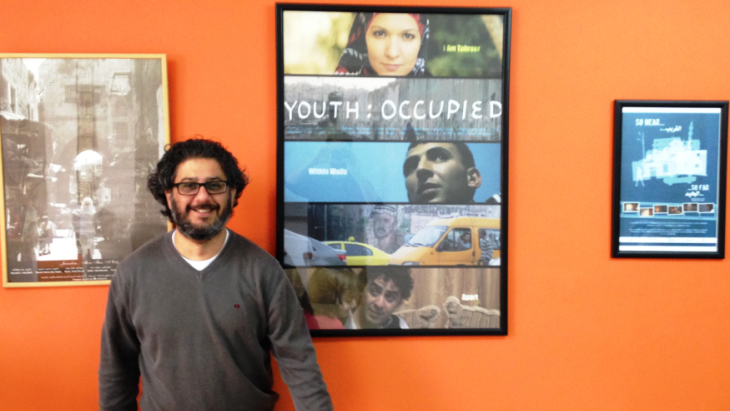 "Culture is our best bet"

Hanna Atallah is one of a group of Palestinians that is aiming to bring arthouse cinema to the Arab world. No small feat, in regions where the necessary infrastructure is lacking and the majority are more likely to stay home and watch television. Attending the Berlinale in February, he was interviewed by Rene Wildangel

You attended this year′s Berlinale film festival: what brought you to Berlin?

Hanna Atallah: I came for two reasons: firstly, for the NAAS network, which was part of the Forum Expanded programme. NAAS is a new regional network that aims to make arthouse cinema more popular in the Arab region and is examining ways of professionalising financing, distribution, subtitling and other aspects. It involves directors, film critics, cinema owners and others drawn from the film industry throughout the region – Lebanon, Palestine, Jordan, Tunisia, Morocco, Egypt, Algeria and the United Arab Emirates.

Screenings in the Middle East are generally of commercial movies. Smaller productions don′t get a look in – they are only shown at festivals. Our aim is to bring them to regular cinemas. The second reason for coming was networking for Filmlab Palestine, a new initiative in Palestine which boasts a yearly international film programme – ″Days of Cinema″ – not to mention numerous projects designed to increase the quality of film making in Palestine.

How are you going to bring arthouse cinema to the Arab world?

Atallah: It′s not easy and it depends on the country. In Tunisia, Egypt and Lebanon, the initiative is already working well. In Palestine and Jordan we are encountering more difficulties, since the cinema culture in these countries is weak to begin with. People watch television but don′t generally go to the cinema. Only a handful of cinemas exist anyway and mostly they just show commercial films. Back in the 70s and 80s that was different; cinema then was still part of people′s lives.

This all changed during the first intifada: most of the cinemas were closed and cultural life shut down. Another problem in Palestine is distribution. It suddenly became a lot more difficult. Today, Palestine is isolated. The current trend in religious conservatism also does not help, with some clerics declaring cinema to be ″haram″ (forbidden by Islam). Here′s just one example to show how things used to be: between them, Tulkaram and Jenin boasted several cinemas, amazing cinemas, which have since been turned into wedding halls. When organising our ″Days of Cinema″ festival, our starting point is a total lack of projectors, cinemas and so on. It′s not easy.

Yet, after the Oslo Accord, so much money was invested in the cultural scene and so many international organisations got involved: why didn′t this have a positive impact?

Atallah: Many mistakes were made. In the 90s there was no shortage of funds, so many people didn′t realise that the situation might one day change. They didn′t plan for the long term. On the other hand, of course, donors create dependency: they support project-based activities, but don′t invest in infrastructure. It′s part of a power dynamic. If Palestinians were completely independent with their own infrastructure, then why would you need external funding? If, after Oslo, the money had gone to the rights channels, we′d be competing with Dubai by now. Corruption naturally plays a role too. 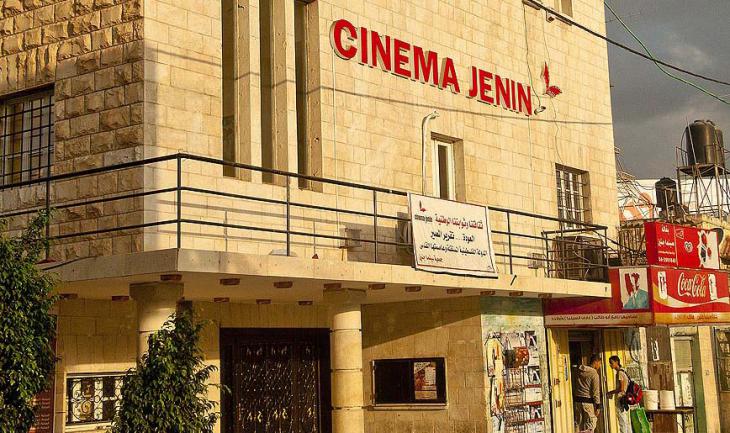 A fight for survival: "it's true that the identity we gave it has disappeared and now it's something else, but even in its present identity there is hope and we have to help it," says Vetter, one of the project's initiators

Look at projects like ″Cinema Jenin″: they brought in a lot of people from the outside, but they had no long-term vision. So the project died like a plant that people forget to water. That′s when we got the idea for ″Filmlab Palestine″. Initially we held workshops in refugee camps in Jordan. But once the projects are over, participants return to their day jobs. You need a long-term strategy so people can focus on film-making and that is what we′re trying to achieve.

During the Berlinale some directors told me that with all the chaos in the Middle East there seems to be a special energy that translates into the films. What about Palestine?

Atallah: My answer as a filmmaker is that you always have the energy to make a film. It is inside you. The question is, what kind of story do you want to tell?

In our modern age of television, social media and live broadcasting, everything moves very fast. In the case of cinema, it is different. It is more about a story you want to tell – and how much you can free yourself from stereotypes and expectations. The last thing you need when making a film is to feel burdened. You should tell the story in just the way you want to tell it.

Sometimes Palestinian cinema gets trapped into answering questions. We are not free. We even have to answer questions such as whether we exist, whether we have a ″P″ or not.

Is exchange within the Arab region important? Did the Arab Spring have an impact on Palestine?

Atallah: Palestinian filmmakers are generally influenced by the international language of film. But the Arab Spring has played a role, too, even if Palestine was not the focus. We share the same images. A new generation is emerging that is more aware of cinema as a medium and its possibilities. They keep their distance from political obligations. These days, no-one is trying to tell the whole story of Palestine in one film.

This new generation are bringing hope. They are managing to express themselves more freely. Last year′s Berlinale entry from Palestine Al-Hob wa Al-Sariqa wa Mashakel Ukhra (Love, Theft and Other Entanglements) by Muanad Al-Ayan is just one example. Today′s young film makers are more courageous; they are putting forward their own critiques. A film like Amer Shomali′s ″The Wanted 18″ tackles a typical theme, but in a very creative and unusual way.

Palestinian film makers are spread throughout Gaza, Jerusalem, the West Bank, Israel, the diaspora across the region and the rest of the world. Is there a lot of exchange?

Atallah: We′re all connected. Everybody knows everybody else. Sometimes we work on a joint project and the crews come together. If someone like Hany Abu-Assad arrives to make a film, there might be a sound guy from Haifa, an assistant from Ramallah, a location manager from Jerusalem. But the points of view from these different areas or ″islands″ are every different. Everybody has different issues. This is what makes Palestinian cinema potentially so rich, there is an incredible amount of diversity. Palestinians from the diaspora are likely to tell stories differently, with more nostalgia.

In what way is Israeli government policy restricting Palestinian filmmakers?

Atallah: Palestinian film makers in Israel have the most problems. Especially following the recent decision, that if you receive state funds, you have to declare the film ″Israeli″. If you′re unlucky, you could find that neither Israel nor the Palestinian Authority are willing to fund your project.

The current Israeli government couldn′t care less. It is extremely right-wing. All it is aiming to do is make life difficult for the Palestinians and the progressive elements of Israeli society. Just look at the recent NGO law. Many Palestinian organisations in Israel are struggling to survive financially.

For us Palestinians, culture is our best bet. There is so much talent, so many good artists and an endless supply of stories. It′s the only way to resist. Culture should be our prime means of expression. Other sectors lack leadership, a strategy. Economically everything depends on Israel. The cultural and academic boycott, on the other hand, has political potential.

You mention the cultural boycott. Some international artists have joined, others have denounced it, for fear that it will shut down the cultural potential for dialogue. What do you think?

Atallah: I think it depends. The boycott movement is growing quickly internationally. It′s basically a result of the destructive policies being pursued by a very right-wing Israeli government. Israel has now launched a huge countermovement, which means it was already having an impact. At the same time, it is not enough to rigidly stick to the rules. Knowing more about each other is not a sin, it is a necessity. In some cases, more discussion will be needed. We′re not talking about sanctions – the idea is a political strategy aimed at putting pressure on Israel to end the occupation.

The template of the mentally disturbed gunman doesn't fit. Seeing himself as a spearhead, heralding a new rise to power, the murderer of Hanau placed himself squarely in the Nazi ... END_OF_DOCUMENT_TOKEN_TO_BE_REPLACED

A newly leaked document confirms how China is imprisoning Muslim minority Uighurs based solely on their religion. Naomi Conrad met with a whistle-blower and visited relatives of ... END_OF_DOCUMENT_TOKEN_TO_BE_REPLACED

Education is the key to the future. Muzoon Almellehan has known this since she was 14 years old. But she lives in a Jordanian refugee camp. And since then she has been fighting ... END_OF_DOCUMENT_TOKEN_TO_BE_REPLACED

Michael Frey has written a fascinating book about the contemporary political thinker Nassif Nassar. Since 1967, Nassar has devoted his life’s work to the question of a fair social ... END_OF_DOCUMENT_TOKEN_TO_BE_REPLACED

The Kurdish YPG militia did the heavy lifting in the fight against the "Islamic State", yet many foreign YPG adherents, including Germans, have come home to find themselves under ... END_OF_DOCUMENT_TOKEN_TO_BE_REPLACED

END_OF_DOCUMENT_TOKEN_TO_BE_REPLACED
Social media
and networks
Subscribe to our
newsletter