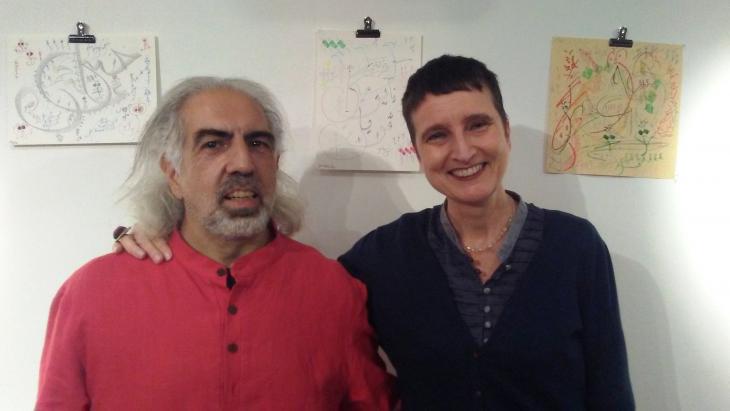 Palestinian artist and poet Farid Bitar's work was recently included in Smokestack Books' "A Blade of Grass: New Palestinian Poetry", edited by Naomi Foyle. One of the 60 people allowed to enter the Gaza strip for a few hours during the Gaza Freedom March in 2009, Bitar talks to Valentina Viene about his activism and his art

Farid, you are an artist, you have a day job and you′re an activist. What motivates you?

Farid Bitar: I have a full-time job as a case manager dealing with the AIDS population and to me that′s one way of repaying our debt. I make a difference to people′s lives. The rest of my time is activism: poetry, performance, recording. I paint, I carve wood. To me it′s like a tripod. A painting is created from a poem, a poem is turned into a wood carving, a wood carving comes out of paper. I keep asking myself what′s the purpose of life? I′m not changing New York, I′m not changing anything in Palestine. I tell myself, I must either be the voice of sanity or justice.

Where does your family come from and have you ever gone back?

Bitar: My parents were from Jerusalem. I am a proud Jerusalemite. No one can take that from me. I am Jerusalem born, Jerusalem bred. And one day I will live there. I was there in 1967, I was 6. My last trip to Jerusalem was in 2007, when my mother was dying. I went to visit her, in a settlement unfortunately, in a hospital and then in a nursing home and I was very much against it. I wrote four poems about my experience there. The month after I left, she died. That was my last trip. I′m not sure I can go back there anymore. My poems are everywhere. My voice is everywhere and I want it that way.

Bitar: I don′t know who started it, but amazingly enough, after we had established how many people had died in Gaza (1470 some), almost the exact same number travelled to Cairo from 43 countries, under the banner of the Gaza Freedom March. I said to myself I′ve got to be part of this. I was one of the 60 people who got to go in. It was a very proud moment. I was in Gaza for 48 hours. The sad thing was that supplies were getting through, but they were being controlled by Hamas. 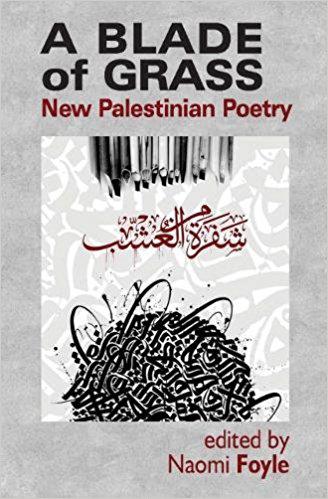 "As Palestinians, we′re always very sceptical of speaking out because of the retribution and what Israel does to our family members and their houses. I call it vengeance. That′s why my older brother kept quiet. I was quiet until my mother passed. I was worried about my parents, but as they passed I started to bring things up. I have things to say. And it doesn′t have to be poetry," says Bitar

Has anyone been a particular inspiration to you?

Bitar: Che Guevara is my revolutionary inspiration and Mahmoud Darwish my poetic inspiration. He may only have been 20 years older than me, but he is the voice in the back of my head. And then there is Fadwa Tuqan, she is even stronger but no-one′s heard of her. Darwish, for instance, would be the one sitting at her feet, listening.

What do you think would make the Palestinians stronger?

Bitar: We are dealing with a shrewd enemy. I use the word ″enemy″ because they treat us as if we were parasites. We don′t have to be smarter, but we have to unite. In unity we can triumph. I am very proud that Hamas and Fatah are uniting. I′m not sure how long it′s going to last but unity is important. The Zionists are extremely united. It ′s the one thing we could arguably learn from them.

Is it possible for people to reconcile themselves to life, after experiencing war?

Bitar: I′m fine. Many other Palestinians are not. Sometimes I have trouble sleeping. Often at 3 or 4 in the morning I am painting, thinking, walking, like a zombie. Sleeping pills have no effect, but I still go to work the next morning. My nation is so dear, so important to me.

That′s how I write my poems sometimes, out of my dark space. I have visions and I am not sure what they are. All my poems are dedicated to the dead, not the living. I use different words: exterminated, slaughtered, massacred. My grandma, no head, my uncle, no head.

Four words crop up in my art all the time: al-′ouda [return], Filasteen [Palestine], Nakbah [Palestinian exodus or catastrophe] and al-Quds [Jerusalem]. They recur because we are burning, but we won′t be erased.

What are the proud moments in your career as a poet?

Bitar: Performing my poem ″Nakba″ in front of City Hall and the Mayor of New York. It was not the one I had submitted. I recited it from memory, in both Arabic and English, wearing my Harley Davidson Jacket and my kufiyah. I also performed in front of a crowd of two thousand on the 48th anniversary of our Nakba. Some of my poems have been read on the radio – ″Oh Jericho″ and ″Bauha″ were featured on Columbia University QXR. A radio presenter friend of particularly liked ″Bauha″. She kept podcasting it for listeners. ″Farid″, she said, ″If we take you out of that poem and substitute another child in Cambodia, in Afghanistan, in Iraq, it′s the same poem. A child in a war.″

When you performed the poems at the London launch of ″A Blade of Grass″, you added some lines that are not in the book.

Bitar: I′m a performance poet, so that happens sometimes. Paper can be restricting. Holding a book and reading from it destroys the intensity. It′s my poem and I own it and I have the right to step out of the window or through the door – it is a perfectly human thing to do. I see the crowds and I get excited, not nervous. Not about being centre-stage, but about sharing the depths of a poem with an audience. It′s a unique experience.

Do you prefer one language to another?

Bitar: Ninety percent of what I write is in English, because of my years in the USA. Yet I am proud to return to my own linguistic roots. When I land a poem in Arabic, I leave it as it is. Sometimes translating poems can ruin them.

But you still translate them yourself?

Bitar: Yes, I don′t want another person to do it, they don′t know what I am feeling. As Darwish and Fadwa Tuqan and Neruda have all said, a poem loses 20 - 30% of its meaning when it is translated. So I′d rather translate my own.

Her grandparents are Jews – born in Tunisia and Algeria. Director Cleo Cohen has now broken the silence about this with a very personal debut. By Nadine Wojcik END_OF_DOCUMENT_TOKEN_TO_BE_REPLACED

Every year in December, the team at Qantara.de takes a look back at the articles that proved most popular with our readers. This year is no different. Here is a run-down of the ... END_OF_DOCUMENT_TOKEN_TO_BE_REPLACED

Christmas in Bethlehem is usually a festive and colourful season. This year, festivities in the Palestinian town are set to return – but the COVID-19 pandemic is still casting a ... END_OF_DOCUMENT_TOKEN_TO_BE_REPLACED

Haifa is known for being Israel’s exemplary model of relative harmony between Jewish and Palestinian citizens. Its unique "Holiday of Holidays" is a joyous, multicultural event ... END_OF_DOCUMENT_TOKEN_TO_BE_REPLACED

May 2021 saw a deadly flare-up in Israel-Hamas hostilities, with eruptions of extreme violence in several of Israel's 'mixed' cities. Two weeks later, a broad-spectrum governing ... END_OF_DOCUMENT_TOKEN_TO_BE_REPLACED

Ankara is seeking to improve its relations with several states in the Middle East – such as the United Arab Emirates, Egypt and Israel. There are several reasons for this. ... END_OF_DOCUMENT_TOKEN_TO_BE_REPLACED

Comments for this article: ″I must either be the voice of sanity or justice″

END_OF_DOCUMENT_TOKEN_TO_BE_REPLACED
Social media
and networks
Subscribe to our
newsletter