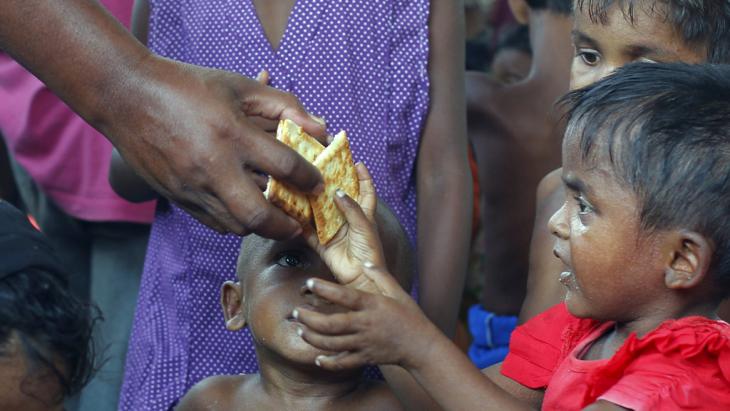 Interview with Phil Robertson of Human Rights Watch
"These are people floating around, waiting to die"

Thousands of minority Rohingya Muslims remain stranded at sea without adequate food and water. On Wednesday, 20 May, Malaysia and Indonesia finally bowed to mounting international pressure, announcing that they would offer refugees temporary shelter provided that they are resettled and repatriated by the international community within a year. Roma Rajpal Weiß spoke to Phil Robertson, the deputy director of Human Rights Watch in Asia, who condemned the policy of the countries of South-East Asia

What are the estimates of the number of Rohingyas stranded at sea?

Phil Robertson: It's extremely hard to come up with a solid estimate because it's not clear how many boats there are or where these boats are. The best information that Human Rights Watch has now is that up to 8,000 Rohingya and Bangladeshis may still be at sea, being bounced around like human ping-pong balls between the maritime forces of Indonesia, Malaysia and Thailand.

Let's be clear: these boat push-offs are going to result in people dying at sea unless these governments stop this immediately. The navies of these three countries need to act urgently to find all the boats at sea and bring them ashore as an emergency humanitarian act, so that these boat people can be feed, receive medical attention and be protected. Everything else is secondary to that.

Can you describe the conditions on the boats and in the camps?

Robertson: The conditions are absolutely dire. Some of these people have been on these boats for weeks – and in some cases months – and they have little to eat, limited potable water and are cramped into every nook and cranny of the boat. Not even basic sanitation is possible, and there are no medical supplies. Those on deck are exposed to the elements. These are people floating around, waiting to die unless they are rescued. 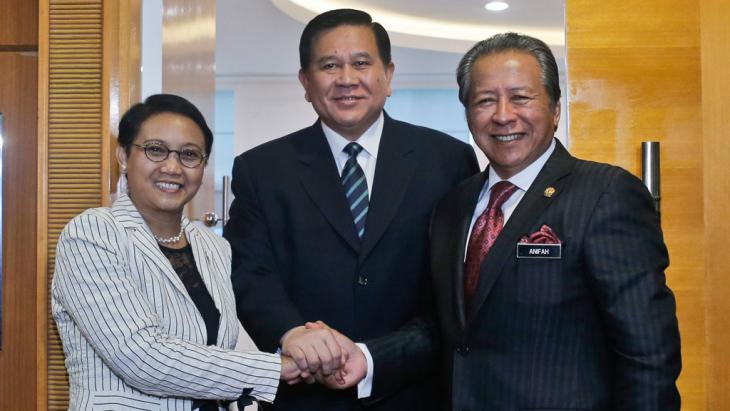 From left: the Ministers of Foreign Affairs of Indonesia (Retno Marsudi), Thailand (Tanasak Patimapragorn) and Malaysia (Anifah Aman) at a meeting on human trafficking and people smuggling, Malaysia, 20 May 2015. As hundreds of Rohingya and Bangladeshi migrants landed in Indonesia early on 20 May, the foreign ministers of Malaysia and Indonesia announced that they would offer refugees temporary shelter provided that they are resettled and repatriated by the international community within a year.

What kind of assistance are they being offered and by whom?

Robertson: As they are pushing off the boats, the Thai, Malaysian and Indonesian navies say that they are providing the people with food, water and fuel. How they do that is another matter – as we saw last week, when a Thai helicopter dropped foodstuffs into the water next to a Rohingya boat and emaciated people had to jump into the ocean to swim and retrieve them. These governments think that offering some packs of water and instant noodles is somehow enough to sustain people who are obviously emaciated and in need of urgent assistance. We're talking about women and children, in addition to men, who are on these boats. It's an absolutely urgent situation that needs the international community's action.

Who is accountable for this crisis?

Robertson: Thailand, Malaysia and Indonesia are immediately responsible for their cruel, heartless policy of pushing these people back out to sea, and any deaths that result are their immediate responsibility. Burma is responsible for perpetrating rights abuses and discriminatory policies towards the Rohingya that compels them to flee, including ethnic cleansing and crimes against humanity that Human Rights Watch documented in 2012.

Since then, Burma has kept over 150,000 Rohingya locked down in internally displaced person camps, surrounded by Burmese security forces and hostile Buddhist Rakine communities, without citizenship or rights, access to livelihoods, basic medical care, education or other vital humanitarian services. And Bangladesh continues to push back and mistreat the over 300,000 Rohingya who have fled to that country for refuge.

What do you urge the South Asian countries to do? 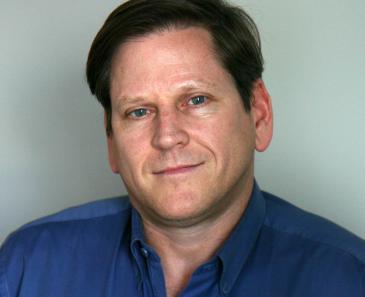 "Thailand, Malaysia and Indonesia need to search out all the boats and bring them to shore, provide immediate humanitarian and medical assistance to those on board, and give the UNHCR unfettered access to those who wish to make claims for refugee status," says Phil Robertson (pictured here), deputy director of Human Rights Watch in Asia

Robertson: Thailand, Malaysia and Indonesia need to search out all the boats and bring them to shore, provide immediate humanitarian and medical assistance to those on board, and give the UNHCR unfettered access to those who wish to make claims for refugee status. Burma needs to end its abusive policies towards the Rohingya, give them citizenship and hold accountable those who have committed crimes against humanity in Arakan state. And ASEAN has to demonstrate some real regional leadership for a change.

Thein Sein's government has refused to participate in the regional meeting in Bangkok which is scheduled for 29 May. What do you make of that?

Robertson: Burma's continued policy of denial of the abuses that are being perpetrated against the Rohingya is unconscionable and unacceptable. But this meeting is happening too late. Unless the boat push-offs are stopped immediately, there might not be anyone left alive on these boats by the time the meeting takes place.

What can the international community do to help resolve the crisis?

Robertson: Pressure all these governments to end their stand off, and treat the Rohingya as human beings whose human rights must be respected. The international community's pressure on Thailand, Malaysia, Burma and Indonesia is critical to break this deadlock.

Home
Print
Newsletter
More on this topic
The Muslim Rohingya minority in Myanmar: Stateless people in search of a homeMalaysia and Indonesia will take in migrantsPhoto gallery: The Rohingya refugee crisisRohingya Muslims in Myanmar: The spectre of ethnic violence reappears
Related Topics
Muslim minorities, Policy on refugees and migration, Refugees, Rohingya Muslims
All Topics

With its traditions of neutrality and non-alignment, Indonesia has had to tiptoe around the Ukraine war debate. Pro-Russia sentiment in the region complicates Jakarta's foreign ... END_OF_DOCUMENT_TOKEN_TO_BE_REPLACED

Calls for an environmentally-conscious form of Islam are growing in Indonesia, as climate change poses enormous ecological challenges for the country. Experts say it could change ... END_OF_DOCUMENT_TOKEN_TO_BE_REPLACED

Indonesia has become a primary battleground between democratic and autocratic visions of Islam in the 21st century, with Nahdlatul Ulama pitted against Abdullah bin Bayyah, a ... END_OF_DOCUMENT_TOKEN_TO_BE_REPLACED

Research project "The Global Qur'an", brainchild of Professor of Islamic Studies Johanna Pink and sponsored by the European Research Council, analyses the history and ... END_OF_DOCUMENT_TOKEN_TO_BE_REPLACED

At a time when even some rich democracies are electing con men as their political leaders, the success of Indonesian President Joko Widodo deserves wider acclaim and appreciation ... END_OF_DOCUMENT_TOKEN_TO_BE_REPLACED

Comments for this article: "These are people floating around, waiting to die"

We really applaud your hard work,Phil.

Your hard works finally to be started into action.You should have to do more for this forgotten Rohingyas ,Phil. I really applaud you.

END_OF_DOCUMENT_TOKEN_TO_BE_REPLACED
Social media
and networks
Subscribe to our
newsletter